On Netflix, ‘Roma’ and Auteur Theory

Ever since Netflix began to produce and procure original content in 2012, it has struggled to legitimize itself in the eyes of mainstream trendsetters. This has been no real trouble for the company whatsoever – Twitter and other social media had made word-of-mouth much more important even then – but the refusal to validate Netflix’ material is a barrier when it comes to awards discussions, which Netflix has been trying to muscle into for the past couple of years.

It’s been easy – and incentivized – to look down on Netflix’ content, but if history is any indicator, some of its more recent releases are going to change that. It has to do with a critical theory that has shaped film history, forcing new platforms, techniques and ideas into legitimacy wherever it goes.

It’s the 1940s. Film has been around for a while now and many of its key historic movements – German Expressionism, the Film Noir boom in America – have already taken place, but the prevailing opinion among art critics is still that cinema is a purely commercial product that exists only to rebroadcast stageplays and musicals for a profit. This is particularly a problem for European filmmakers who’ve never had access to the kind of audience the U.S. affords – the whole continent has been on fire for almost the entire history of film at this point, cut them all some slack.

In 1954, French filmmaker and critic François Truffaut publishes his seminal essay “Une certaine tendance du cinema français-” literally translated, “A certain trend of French cinema.” In it, he argues that a film’s director is the singular driving factor of its vision and subtext, that everything good or bad about a film can be understood through the lens of the director’s choices and that a film’s overall quality directly correlates to how much control the director had personally over the final product. These ideas would eventually solidify into Auteur Theory, coined by American film writer Andrew Sarris using the French word for “author.”

This is obviously not universally true, but for Truffaut, Auteur Theory solved several problems. Much of the argument against seeing cinema as an art form was that it is an inherently collaborative process. Paintings have painters and books have authors, but what did films have? Truffaut argued that the director is the answer to that question.

Moreover, it gave the French film industry a rhetorical leg to stand on when comparing itself to the American studio system, in which directors were often just elevated set-wranglers that left all the creative decisions to writers and producers – which is still an extremely important job. Having successfully set originality and vision as the standards by which a film is measured, Truffaut and his gang put out several highly original films that clearly reflected their vision, and then turned around and said American films that weren’t necessarily trying to be original were unoriginal and therefore bad. This was another key movement in film history called French New Wave.

Several years later in a period generally bounded from 1968-80, a bunch of Americans – Steven Spielberg, George Lucas, Francis Ford Coppola, Martin Scorsese – the first crop of directors who had formally studied film and grown up on these French ideas that a director can and should do whatever he wanted, started imposing their will on American cinema. This is called the New Hollywood era, and the combination of Hollywood resources and auteur boldness produced a large percentage of the best films ever made – The Godfather, Taxi Driver, Chinatown, The Shining and Alien, for just a handful of examples, all gestated in this environment. Those movies came out within eight years of each other.

The New Hollywood era ended on some famously difficult and expensive productions like Apocalypse Now and Heaven’s Gate, which demonstrated that directors are fucking whackos and maybe giving them all the money in the world with no real oversight wasn’t the best idea.

It is here, in the early ‘80s, that we come to the crossroads that has defined Hollywood ever since. Using the advertising techniques pioneered by Jaws and the merchandising power proven by Star Wars, the blueprint for how to make money with a movie had been laid out, as had the blueprint for how to earn awards with The Deer Hunter. If a movie’s goal was to earn money or awards, its quality no longer necessarily mattered, and this has only become more true as time has marched on. Commercial and prestige cinema split off in different directions and have never looked back, creating the ever more exaggerated disconnect we see between Best Picture nominees and top commercial performers.

But what of the auteurs? What of the directors who make films not for money or recognition, but to make art? There was still a market for names like Spielberg and Scorsese, but a large part of being an auteur in the 21st century is finding a way to get your unadulterated vision onto a screen in an era where no one is really funding that anymore. This is why at the start of the ‘90s you see a lot of directors like Quentin Tarantino and Wes Anderson with their own production companies.

But with the advent of Netflix, which exists neither to win awards nor to make money with films as individual endeavors, there now exists a perfect partnership for those auteurs. Filmmakers who create films for their own sake now have a studio that needs content only for the sake of having it. Instead of justifying a whole trip to the theater, which most Americans only make four or five times per year, Netflix films only have to justify continuing a subscription that you probably barely notice anyway. 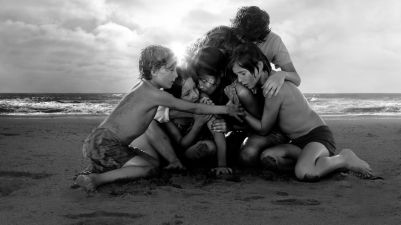 While Roma is a major breakthrough in recognition for Netflix, it was made by Cuarón independently and purchased by the streaming service. The systemic breakthrough is represented by the Coen brothers’ Ballad of Buster Scruggs, which they sought out Netflix to make, saying they felt they could not get funding from a traditional studio.

Netflix had already distinguished itself as an outlet for big-name creatives – in a bad way for its massive deal with Adam Sandler, but more subtly in funding multiple projects for up-and-coming stars behind the camera like horror master Mike Flanagan and The Raid director Gareth Evans. The Coens, who share 14 Oscar nominations and four wins over their stellar 35-year career, were a major get for Netflix, but their biggest coup will come later this year, when Martin Scorsese, one of the original American auteurs, will release his long-gestating project The Irishman on the streaming platform.

2 Responses to On Netflix, ‘Roma’ and Auteur Theory