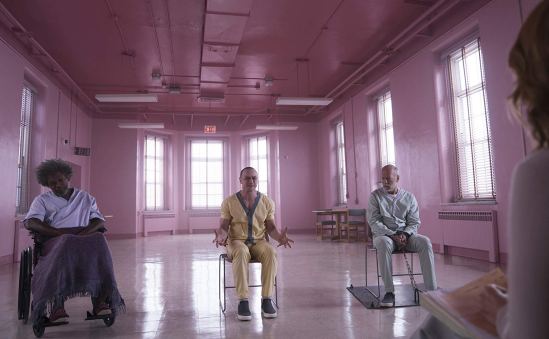 It was a whisper-quiet weekend at the box office, with the top 12 making only $79.8 million overall, the third worst number going back a full calendar year. A big reason why was a lack of exciting new releases – The Kid Who Would be King opened at no. 4 with $7.2 million, and Serenity opened at no. 8 with $4.4 million. Glass repeated at the top with $18.9 million, while The Upside was the only other show in eight figures at no. 2 with $11.9 million- Box Office Mojo

Though he’s been spurned by The Academy over homosexist Tweets from the start of the decade, The Upside proves that Kevin Hart still brings a loud and proud audience, and he’s already signed to two more movies – a live-action Monopoly adaptation and a Sony movie called Fatherhood. Let’s hope there aren’t any gay moments in that- The Hollywood Reporter

Outside box office revenues, the soundtrack for Spider-Man: Into the Spider-Verse, which is still kicking around at no. 5 with $6.1 million in its seventh weekend, has climed to no. 2 on the Billboard 200 albums chart. It follows in the footsteps of sountracks to movies like The Greatest Show and La La Land which peaked in late January and into February during long runs for the associated films- Billboard

Followed by sexual misconduct claims for 20 years, director Bryan Singer emerged from the past year’s #metoo movement oddly unscathed. A new report, which includes four new accusers, tracks the disturbing allegations over the course of his career, detailing how Singer allegedly surrounded himself with vulnerable teenage boys – and how bringing him boys was a widely known way to curry favor with the director- The Atlantic

Singer was already attached to direct Red Sonja for his next project, and producer Avi Lerner, the chairman of Millennium films, has said that he will remain in that capacity, saying, “I know the difference between agenda driven fake news and reality, and I am very comfortable with this decision.” Singer, who identifies as gay, called The Atlantic’s article a homophobic smear piece- The New York Times

Many, including Singer himself, have noted that The Atlantic’s report came out within 24 hours of Singer’s latest film, Bohemian Rhapsody, being nominated for five Oscars. Singer, who the report notes has a long history of drug abuse interfering with his work, was fired from the movie two weeks before shooting wrapped when he failed to show up for work, and as such, he was already conspicuously absent from the awards campaign, but there is speculation that the new report will cause trouble for the film down the road. Despite being about one of the biggest bisexual icons in history, it was left out of the GLAAD media awards- The Washington Post

Best Actor favorite Remi Malek, who came away with the top Screen Actors Guild award Sunday night, said he was not aware of the allegations against Singer, which is utter bullshit- USA Today

Malek and Glenn Close were major winners at the SAG awards, which carry huge implications for the Oscar race. Malek and Close should now be considered heavy favorites in their categories. The biggest winner, however, was Black Panther, which took home the Outstanding Cast award- The New York Times

Putting the SAG influence over the Oscars into context- Vulture

In addition to his SAG and Golden Globe, Malek has also been pegged as the Outstanding Performer of the Year at the 2019 Santa Barbara International Film Festival- The Hollywood Reporter

Meanwhile at Sundance, a new documentary Leaving Neverland that features two men who allege that late pop star Michael Jackson abused them as children in the ‘80s and ‘90s has drawn backlash from Jackson’s still-present fanbase. The Jackson estate called it an attempt by the Sundance institute to exploit Jackson’s fame, and the two accusers, as well as director/cinematographer/producer Dan Reed, say they have received death threats from Jackson’s fans- The Los Angeles Times

DC Comics laid off seven employees out of its 240-person workforce last week. DC is a Warner Bros. subsidiary, and this comes a few months after major layoffs at the studio level. Warner Bros. has been struggling to turn a movie franchise based on the comic book brand into a consistent money-making machine for several years, only recently turning out its first $1 billion-earner in Aquaman- The Hollywood Reporter

In addition to Best Picture screenings, Black Panther will see releases related to Black History Month this February. AMC is hosting a week of free screenings for the film starting Feb. 1- Variety

Japanese box office figures for 2018 were released in a press conference last night. It was the third largest year ever for Japanese theaters, down three percent with about ￥223 billion, which exchanges into $2.04 billion- The Hollywood Reporter