‘The Favourite,’ and with good reason

Posted on February 1, 2019 by reelentropy

The exclusive use of natural lighting and film accounts for what is frequently a very grainy movie. Images courtesy Fox Searchlight Pictures.

9/10 The Favourite is at once a fearsome period drama and a no-holds-barred, pitch-black  comedy about power, sex and sass. It queers a fascinating historical power struggle and brings it perfectly into the Trump era.

In 1708 during the War of Spanish Succession, Anne, Queen of Great Britain (Olivia Colman) presides over Parliament. Anne is uneducated, pitiful and self-pitying, and most of her decisions are really made by her lady of bedchamber, Sarah Churchill, Duchess of Marlborough (Rachel Weisz). These decisions frequently come to Parliament out of nowhere and with no one knowing where the information came from, bewildering opposition leader Robert Harley, First Earl of Oxford and Earl Mortimer (Nicholas Hoult), whom Churchill has frozen out of Anne’s council – for example most of the plot centers on a proposed doubling of the land tax that is never publicly discussed. This dynamic gets turned on its head when Churchill’s cousin, Abigail Hill (Emma Stone), arrives at court and begins to replace Churchill as Anne’s favourite.

The Favourite focuses on the sharp melodrama between Anne, Churchill and Hill, and primarily the evolving relationship between the two ladies. Anne is to the narrative as she is to Parliament – entirely passive except for unruly outbursts and much more concerned about being loved and having fun than running the country. She’s most often preoccupied playing with her 17 pet rabbits, one for each of her miscarriages.

That’s probably the clearest example of The Favourite’s evil sense of humor. Director/producer Yorgos Lanthimos has never shot a character he doesn’t hate, and his career-long mistreatment of his subjects continues to grow somehow more disturbing. In what remains a detached and light-hearted film, his characters are bitten, mutilated and raped, and they take it all like champs, but it is Anne, the monarch who enters the story long-since driven mad with grief, crippled by her grotesque gout and unable to take any action that isn’t toward satisfying her maternal instinct, that I think Lanthimos hates most of all. 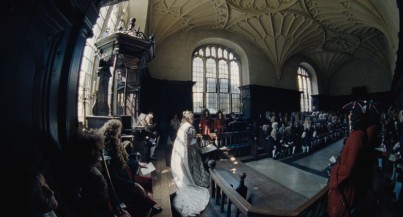 Walls seem to warp outward from the zany fisheye lens.

The Favourite is character-driven more than it is camera-driven – its goal is for viewers to get sucked into the drama more than the filmmaking – but the filmmaking is radically tilted toward that goal, so much so that it draws your attention back anyway. The movie is shot almost entirely on ultra-wide 10mm lenses, at some points going with even more absurd 6mm fishbowls. It causes an extreme third-person perspective, as if the camera is desperate to get as far away from these awful people as possible. Empty spaces in Kensington Palace become imposing caverns of negative compositional space, making even full rooms feel mostly deserted.

The war in the mainland that nobody seems to care about is either ignored or treated as leverage in the palace drama. It’s really the film’s running gag, the completely straight-faced absurdism of Churchill’s and Hill’s power struggle in the context of history. Harley is truly an island in his priorities – most of the rest of Parliament is only seen racing ducks or throwing fruit at each other. The only other noble with any real screentime is Samuel Masham, First Baron Masham (Joe Alwyn), who is “completely cuntstruck” by Hill.

Cunt is The Favourite’s, well, favorite word. It is used lovingly, imaginatively, and often.

Cinematography is one of 10 Academy Awards The Favourite is nominated for, leading the field alongside Roma, but credited cinematographer Robbie Ryan says Lanthimos did all the work. The film used all natural lighting – Ryan said Lanthimos wouldn’t use so much as a diffuser – and the use of fishbowl lenses were carried over from Lanthimos’ previous feature, The Killing of a Sacred Deer, not because of any common story or character reason but because he just liked playing around with them. It’d be easy to see these lenses become his calling card moving forward. The uneasiness caused by their distortion is a good match for the uneasiness he extracts from his actors and the types of stories he prefers.

Lanthimos is nominated for Best Director, though without a Director’s Guild of America nomination, his chances look remote. The Favourite ought to clean house at the British Academy Awards, being a British film, but cinematography is its only realistic chance at the Oscars.

The Hatfield House stood in for Kensington Palace for shooting, but Anne’s home now features a display on the film.

As perfect as The Favourite seems for a post-Trump, post-Weinstein, post-Obergefell world, the story dates back to the mid-‘90s, when writer Deborah Davis discovered the historic power struggle. While the film draws on plenty of first-hand sources for its drama, its most important aspects – especially the sex – are fictious. It is highly unlikely that Anne, Churchill or Hill ever had sex with each other, and Anne’s husband, Prince George, lived until 1714.

It would appear at first glance that sexualizing the power struggle was a salacious try at appealing to people who get hot and bothered about gay stuff, but Lanthimos steers pointedly away from exploitation of this nature. The sexualization of The Favourite’s true story is a character-driven attempt to make the metaphorical literal.

It fits then that, while all the lead characters are explicitly bisexual, at the same time, none of them are. None of these characters seek love or affection from anyone of any gender. They seek only power. Anne has sex with men to secure her regime with an heir – and to fulfill her desperate psychological need to be a mother – and is attracted to Churchill’s and Hill’s power in a completely different way. Churchill is in an apparently loving marriage, but one that grants her a great deal of power, as does her relationship with the queen.

Hill has spent time as a sex slave and a prostitute before the film’s start, and while it’s clearly not her first choice, she never thinks of herself as above it, and she continues to use sex for currency – once for money, now for favor. As The Favourite impresses with its cruel closing shots, Hill may have become the Baroness Masham and the Keeper of the Privy Purse, but in the end, she’s still just a whore.

1 Response to ‘The Favourite,’ and with good reason