Posted on February 2, 2019 by reelentropy 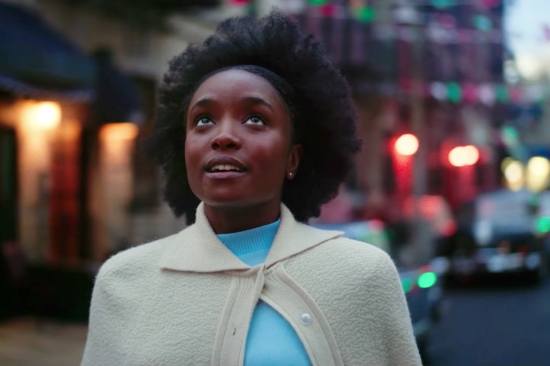 9/10 In 2017, I was unimpressed with Moonlight’s upset Best Picture win over La La Land. Two years later, now that writer/director/producer Barry Jenkins’ followup If Beale Street Could Talk has been strangely passed over in terms of Academy Award nominations, I’m still unimpressed with the Academy for again failing to recognize one of the year’s best films.

If Beale Street Could Talk is the achingly beautiful love story of Tish Rivers (KiKi Layne) and Fonny Hunt (Stephan James). The night they conceive their child, a woman on the other side of Harlem is raped, and a cop Hunt crossed earlier swears to seeing him leave the scene. The film opens three months later with Rivers telling Hunt they are pregnant through prison glass. The film follows the family’s impossible fight to clear Hunt’s name over the course of a turbulent pregnancy, but most of the runtime is made up of flashbacks to backfill their love story.

If Beale Street Could Talk isn’t a literal or spiritual sequel to Moonlight, and nobody’s saying that, but the creative and personnel overlap between the films is staggering. Jenkins wrote both scripts over the same summer vacation in 2013. Joining him behind the camera, cinematographer James Laxton, composer Nicholas Britell, producers Adele Romanski, Dede Gardner and Jeremy Kleiner, editors Nat Sanders and Joi McMillon and production company Plan B Entertainment all carried over from Moonlight to Beale Street. As excellent as Moonlight is, if it’s my money, I spend it on Beale Street every time.

If Beale Street Could Talk is an overwhelming sensory experience. Every frame is a stained glass painting of sharp reds and pale yellows complimenting the characters’ dark brown skin, making the film seem as fire. Between this and the predominantly blue and purple Moonlight, Jenkins and Laxton may have already cemented their cinematic legacies with their gorgeous compositional use of black skin, which stands in contrast to the historic racism ingrained into film stock itself.

Britell’s score alone brings tears to my eyes. Hopeful trumpets and French horns feel their way blindly through the film, leading strings behind. Violins keen sweetly for the doomed couple, fading to silence at the film’s darkest moments.

Everybody thinks I’m this hardass who hates movies — just show me something with pretty colors, and I’ll be happy! That’s really all it takes!

After the #oscarssowhite fiasco in 2017, which almost certainly contributed to Moonlight’s win, and more importantly after Get Out’s incredible success which was concurrent with that awards ceremony, 2018 was noted for a massive influx of stories from black directors about the crushing sensations of being black in America. Too many of these films flew under the radar – Black Klansman will compete for Best Picture, but Blindspotting and Sorry to Bother You deserve more attention – and If Beale Street Could Talk holds a special place in this set as the first ever feature-length adaptation of iconic black and homosexual novelist James Baldwin’s work.

Adapting If Beale Street Could Talk has been a personal goal of Jenkins’ for years, but Baldwin’s estate is notoriously selective with greenlighting adaptations of his work. It’s not really a clear as to why Jenkins’ pitch was successful, but what is known is that it was based on his debut 2008 film Medicine for Melancholy – Jenkins sent the pitch before Moonlight was made. Much of the film’s distinctive and elevating look and sound is directly inspired by Baldwin’s work.

There will be no justice for If Beale Street Could Talk – or for any 2018 films after what is shaping up to be, and in many ways has already cemented itself as, one of the worst and most embarrassing nights in Oscar history – but after an unusually barren January release schedule, it’s still rolling on many screens. Go see it if you can.