Dawn of Justice surprisingly not unwatchable, but an extremely hollow adaptation

There seemed to be only two ways Batman v Superman: Dawn of Justice could go — completely awful and also incredibly sad and dull to the point that you couldn’t even laugh at it, or completely awful, but in a wonderfully over-the-top way that would see everybody have a decent time anyway. But miraculously, against all precedent, the backward creative conglomerate at DC has created a tolerable movie.

The film revolves around the discovery of kryptonite in the wreckage of the world engine, General Zod’s (Michael Shannon) terraforming device from Man of Steel. Lex Luthor (Jesse Eisenberg — seriously, Jesse Eisenberg) first attempts to convince Senator June Finch (Holly Hunter) to legalize its import as insurance against Superman (Henry Cavill), then smuggles it into Gotham Harbor where Batman (Ben Affleck — no, seriously, Ben Affleck) steals it. Having seen the devastation in Man of Steel firsthand, Batman is similarly obsessed with killing Superman, but Superman has also taken notice of him for his turbulent resurgence in Gotham’s underworld.

Wonder Woman’s (Gal Gadot) first onscreen appearance, the first real woman superhero in a movie, was another reason Dawn of Justice was anticipated, but she didn’t do much. She shows up as a distraction when Batman is investigating Luthor and helps with the fight against Doomsday, but doesn’t have a storyline of her own. It’s not overtly sexist, so much like with this movie not being completely unwatchable, we’ll call it a win for now. The real reckoning for women superheroes will be August’s Suicide Squad, which will be lead by Margot Robbie’s Harley Quinn.

Dawn of Justice is not a good movie by any stretch. There’s nothing about it that’s particularly good. It’s way, way too long, and it’s far easier than it should be to identify which parts should have been cut. The action is horrible, evoking bad anime fights or The Matrix Revolutions where they’re not fighting with each other in any interactive way so much as they’re swapping signature moves. The visual effects are weak, for the most part. They don’t hit the religious notes they strive for, though Superman’s nature as a god among insects is actually addressed as a problem instead of just pointed out at every opportunity like in Man of Steel. There are some humongous problems with the story, particularly a subplot in which Luthor dabbles in human trafficking in Gotham and it turns out to be essentially a red herring.

But it’s not a complete embarrassment. It doesn’t make you want to gauge your eyes out. For the comic book company that produced Green Lantern, The Dark Knight Rises and Man of Steel in sequence, that’s a win all by itself.

This is all immaterial, though. Everyone knew this movie was going to be bad — and even if they didn’t, the ass-kicking it’s getting on rottentomatoes clued them in. People were never going to see this because it looked good. People were going to see this because it promised to be the nerdgasm to end all nerdgasms, finally bringing the legendary conflict between Batman and Superman to the big screen.  And that’s the one truly damning thing about this movie — it doesn’t.

It’s extremely popular to hate Jesse Eisenberg and this version of Lex Luthor right now, but for me, he’s the best part of the movie. Batman, Superman and Luthor all kill a lot of people in this movie, and where the movie simply hopes you don’t notice when the heroes do it, Luthor seems to actually understand that he’s responsible for people dying. When he talks about Prometheus and his painting, it feels for once like the movie actually knows where it’s going with its religious themes. He’s not big and bald and menacing like Lex Luthor should be, but he seems like the only character with which the filmmakers knew what they were doing with at all.

The conflict between Batman and Superman is one of the most storied in comics, and is primarily ideological. Superman compromises, Batman doesn’t. Superman inspires and is driven by hope, focused on saving innocents in city-wide disasters before punching Godzilla in the face. Batman causes and is driven by fear and trauma, and focuses on punishing wrongdoers. Superman has all the powers in the world and puts forth almost no effort in using them, getting stuck in problems he should have foreseen and headed off all the time. Batman has no powers and puts forth extreme effort to be the absolute best he can be at all times, and uses his incredible intelligence to minimize his difficulties. All the religious overtones in Man of Steel looked to pay off here as Superman, viewing himself as a messianic figure, would be run down by Batman, viewing him as a herald of the apocalypse.

But really, none of this comes into play. Their polar opposite natures and philosophies aren’t really demonstrated. Their crime-fighting styles aren’t established enough in this cinematic universe to be a point of tension, and what is established of them both is massively problematic and unfaithful to the comics. They barely even talk to each other. So while they technically do fight for two — shockingly lame — minutes, the movie doesn’t deliver the story and characters that comic lovers are coming to see.

It doesn’t help how poorly Batman and Luthor are interpreted. As mocked as he was when cast, Affleck isn’t a problem, but it feels like no one on the development team has cracked open a Batman comic in their lives. In this movie, Batman carries a gun and kills people. He mutilates people, branding criminals with his insignia, known as a practical death sentence in Gotham jails. The batmobile and bat-plane have machine guns on them. Batman is known as one of the smartest, most resourceful men on the planet, and a lot of the problems he has in this movie are problems the comic book Batman would have stepped around without a second thought. Where the comic book Batman has to account for gunfire, this one stands in it like he’s Superman.

Getting similar treatment is Luthor, reimagined as a gleeful, high-energy psychopath who wants Superman dead for very valid reasons. Eisenberg clearly had a ton of fun with the role and I love watching him, though I’m squarely in the minority on that. 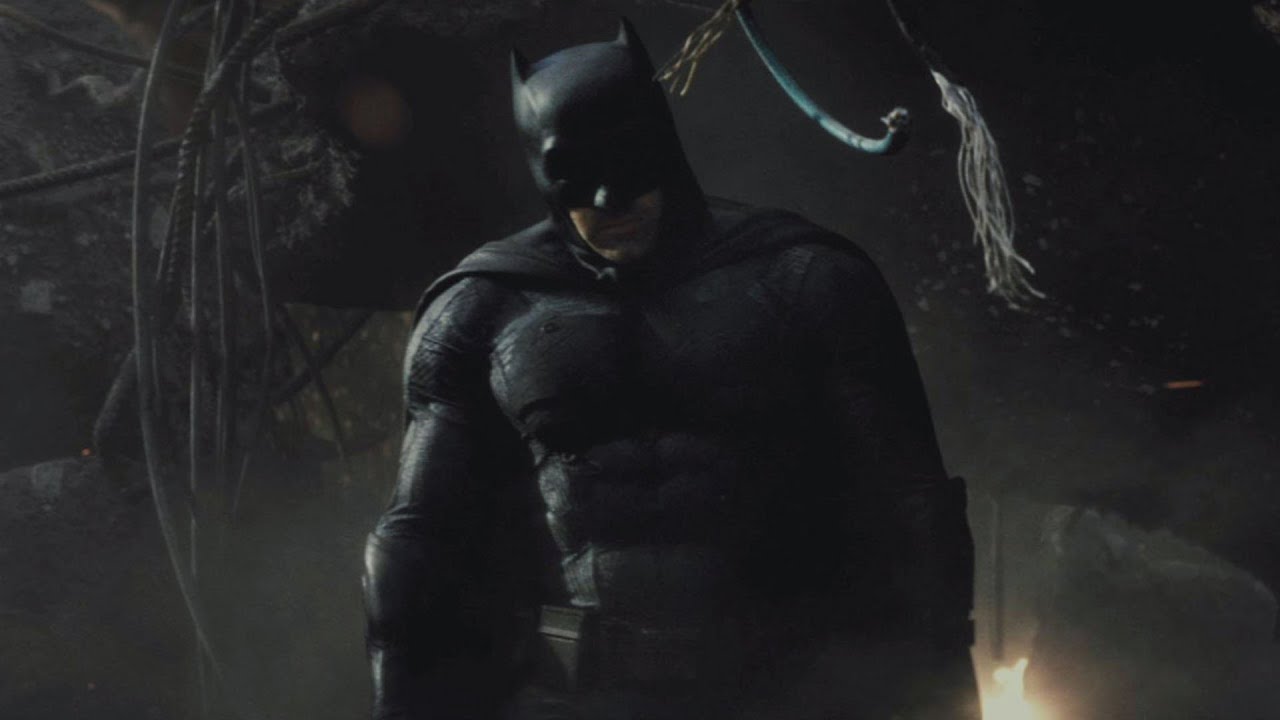 In addition to being a horrible interpretation that throws out everything that makes him a special character, this is also the worst looking Batman on film. He looks like a tire. One of the best, most iconic costumes in cinema is a lazy rubber bodysuit here.

Even though they lift a couple of lines and visuals from The Dark Knight Returns, the seminal graphic novel that was supposedly the film’s primary source, the themes and ideas in that novel are completely absent. Compare this to The Dark Knight, the patron film that all DC movies aspire to now. It was based on The Long Halloween and The Killing Joke, and though it only lifts one visual directly, it perfectly captures and combines the themes and story concepts of those books, and those concepts contribute to its success as a movie in a huge way.

If you still want to see Dawn of Justice out of love for the comics, it begs the question of why you love comics. Do you love the storylines and high concepts? They’re not here. Do you love the pillars of idealism, value for human life and faith in the justice system these characters represent? Superman’s negligence in Man of Steel cost tens of thousands of lives, and Batman straight-up murders people in this movie, which in most interpretations is the only rule he refuses to break. Do you love the concept of secret identities and a double life? They’ve created a universe here where secret identities don’t matter and everybody knows everybody.

Or do you love comics because of the superpowers and spangly outfits and pretty lights? Because that’s all Dawn of Justice has to offer.

Leopold Knopp is a formerly professional film critic, licensed massage therapist and journalism student at the University of North Texas. Death is the worst thing to be afraid of — there’s no way to avoid it. I’ve had a change of heart in regard to reader input. It is now welcomed and encouraged. Like Reel Entropy on Facebook, follow it on Twitter @reelentropy, and shoot questions to reelentropy@gmail.com.

Dawn of Justice is really undermined by its release’s proximity with season two of Daredevil, which succeeds in a lot of the areas Dawn of Justice fails. Daredevil’s only powers are his senses, which are fewer in number and much less acute than Superman’s, but there are several plot points in Dawn of Justice that he’d simply negate because he’s so much smarter and so much more on-the-ball than Superman. Blood-soaked and hard-edged, the series has the dark and gritty chops Dawn of Justice wishes for. An intensely Catholic man who’s superhero persona is themed around the devil, he also captures the religious friction that Man of Steel and Dawn of Justice can only flail at. Photo courtesy Netflix.

2 Responses to Dawn of Justice surprisingly not unwatchable, but an extremely hollow adaptation