It’s a good thing they split Mockingjay up

The last movie in the Hunger Games series is fantastic — as long as you’re not hoping for an epic blockbuster.

The movie picks up with Peeta Mellark (Josh Hutcherson) rescued from the Capitol, but with his mind in tatters after a thorough regimen of hallucinogen-enhanced conditioning and memory alteration. Unable to handle being around him, Katniss Everdeen (Jennifer Lawrence) seeks to join the front lines in last two battles to overthrow the reigning government, but rebel leader Alma Coin (Julianne Moore) sees her as too valuable as a celebrity to risk. Nevertheless, Everdeen sneaks into the main war camp and is caught, but cannot be sent back because she’s been seen. She is instead surrounded by an elite unit and forced to stay behind the lines and shoot more propaganda pieces, though she aspires to sneak away from her team and assassinate president Coriolanus Snow (Donald Sutherland). The bulk of the movie takes place far from the battle.

When a movie is split up into two parts like this, there are a couple of ways it can go — it can be like Kill Bill, which has intentional, distinct stylistic differences between the parts, or Harry Potter and the Deathly Hallows, which simply sold two tickets to one movie. Mockingjay falls somewhere in the middle. The style is the same, but the parts address different conflicts. Part one is about a propaganda war, and part two is about Everdeen realizing her fascist benefactors aren’t much better than her totalitarian enemies. The film still probably could have been one three hour movie, but it doesn’t get into time wasting territory, though it does get very slow at times.

I heard a snore or two at the midnight release, and it wasn’t surprising. This movie series has never stopped for breath or pipelaying, and none of the movies make much sense if seen out of order. Part two of Mockingjay really only works as the end of this nine hour marathon, but with a marketing campaign that pushed the tagline, “Nothing can prepare you for the end,” you have to wonder if anyone in advertising had actually seen any of the previous films. This is not an exciting franchise. This was never an exercise in titillating action sequences and wowing the audience with massive battle scenes. These movies are exclusively about Everdeen, and they focus intensely on her. Even in Mockingjay’s only mass battle scene, an assault on Snow’s mansion that was clearly an elaborate scene to film, the camera sticks tight to the main character. This is not a blockbuster. This is a movie you have to be paying attention to to enjoy,  and that’s one of many ways this film is going to be a letdown for mainstream viewers. 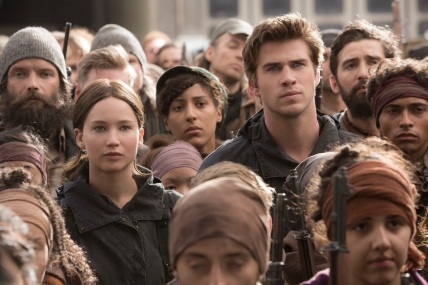 Though tastefully swept under the rug for the majority of the film series, Everdeen’s love triangle with Mellark and Gail Hawthorne (Liam Hemsworth) finally comes to a head in part two of Mockingjay, and it’s somehow just as tastefully handled. This is another aspect of the series that is particularly impressive given the state of young adult adaptations and the way these things normally go.

This series is about oppression and war, and war stories are inherently unsatisfying. Most of the characters who survive are crippled, emotionally if not physically, and a lot of them die. This is not a happy go-lucky series, and it doesn’t have the happy go-lucky ending most people expect from Hollywood.

It’s actually refreshing how un-Hollywood this movie is. It’s not a genre piece. The porn-based structure of blockbusters, which demands at least one or two high-octane sequences early to keep viewers engaged, is completely absent. The goal here was to tell a story, and everything about the movie is secondary to that.

Nobody’s trying to do anything extra here, and it comes through beautifully. The cast, as it has been the entire series, is magnificent — particularly Lawrence and Sutherland. Director Francis Lawrence treats every scene with care. He already has a fantastic bleak, slow movie that was expected to appeal to mass audiences with I Am Legend, and a lot of that quiet film style is applied in Mockingjay. But when there are action scenes, they are fantastic. The film’s best scene, which features Everdeen’s unit hiding in the sewers from a swarm of mutants, is a symphony of horror filmmaking. Every shot for at least five minutes is the perfect opportunity for a jump scare, and they hold that tension all the way through.

Mockingjay is a testament to what book adaptations can and should be. Though Hollywood has moved away from these in the blockbuster era, in books you still see complex internal and interpersonal conflicts often. And while many young adult novel adaptations are tone-dead drudges that are edited like music videos, Mockingjay remains cinematic and on point.

Despite it being well-crafted, it is strangely difficult to recommend this movie. The only people who would really enjoy it have seen it already.

Leopold Knopp is a formerly professional film critic, licensed massage therapist and journalism student at the University of North Texas. Irving, goddamn it. I’ve had a change of heart in regard to reader input. It is now welcomed and encouraged. Like Reel Entropy on Facebook, follow it on Twitter @reelentropy, and shoot questions to reelentropy@gmail.com.