Spotlight a masterpiece, the year’s most authentic movie 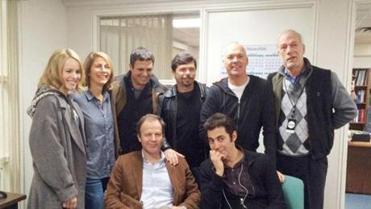 A lot of the film’s quality is driven and necessitated by its story. Even 13 years later, the details of the Catholic sex abuse scandal are revolting, and no movie could ever overshadow the real-life work of the Spotlight team, pictured here with their corresponding actors. Photo courtesy The Boston Globe.

Spotlight brings its world to more complex, nuanced life than any movie in recent memory. This movie is deeply personally affecting, in ways that go far beyond the fact that it’s all true.

The film is about the Boston Globe’s 2002 Pulitzer-Prize winning investigation into systemic pedophilia in the Catholic Church, which resulted in criminal charges against five Boston area priests. The dramatization goes through the hiring of new editor Marty Baron (Liev Schreiber) and his discovery of the story through its investigation by the Spotlight team, leader Walter Robinson (Michael Keaton), Micheal Rezendes (Mark Ruffalo), Sacha Pfeiffer (Rachel McAdams) and Matt Carroll (Brian d’Arcy James).

Spotlight is a film with no real protagonist, but that’s OK because of its plot. A key role for a protagonist is to be a conduit through which the audience learns about the world, someone who doesn’t know what’s going on, asks questions and gets answers about it, and that’s kind of inherent in journalist lead characters. The film uses this to build a world that is shockingly alive. One of the most appalling things about the real-life scandal was how deep it ran, not just in the church, but in Boston. As Robinson notes late in the film, seemingly everyone they talk to already knows about it, from the victims to their lawyers to the priests, but also to school administrators, police officials and random neighbors. Spotlight builds a world in which all of these things exist. It feels like you could walk offscreen and have a chat with someone about how well the Bruins are doing.

An example of what I’m talking about — the movie starts in July 2001 and runs through early 2002. Obviously, the biggest event in that timespan was the Sept. 11 attacks. This throws the Spotlight team off the trail as the Globe puts all resources into stories about the attacks and pushes their publish date back, since they don’t want to compete with ongoing 9/11 coverage. It could have been handled simply as an obstacle in the plot — how dare those 3,000 people be murdered! This is extremely inconvenient for the plot of this movie I’m in! — but even though it’s only dealt with from the plot’s perspective, it isn’t. It’s something else going on in the world, also deserving of thought and attention, just not in this movie.

This incredibly crafted world means every part of the movie hits harder. Mitchell Garabedian (Stanley Tucci) isn’t just a source for Rezendes, he’s his own person with his own life and his own concerns. The church isn’t just a boogeyman full of people that’ll touch your penis — it’s an ancient international tradition, a safe haven for millions. The individual priests’ betrayals, and the revealed systemic coverups, are personal betrayals to the viewer because their victims aren’t just an amorphous mass of effeminate, blubbery men in their mid-30s. They’re real, whole human beings who have been through hell but mostly have their lives together and are really uncomfortable talking about it. Everywhere, cathedrals and hung crucifixes loom. Crosses shine bright from around the necks of victims. At one point, Carroll discovers a house of pedophiles down the street from his own.

Despite an astonishingly good ensemble, Ruffalo stands — or runs — head and shoulders above his cast mates. He is the fantasy of being a journalist, from the way he scrambles around to the way he talks to the way his lips purse when he’s listening to someone. Everything about this movie is tempered yet perfect, and his performance is somehow more perfect than the others. Photo courtesy Open Road Films.

The journalism cliches, of which there are many, aren’t really cliches. They’re not a ticked list of things you’d put in a journalism movie, they’re reasonable, necessary actions for characters to take in these situations.

This is a particular movie to show kids in their early teens, not to give them a healthy fear of religious leaders, but to better help them understand how human beings work. The plot relies on some of the more complex dynamics of adult life, the kinds of things that are difficult to explain, and it captures them brilliantly. The reputation-driven symbiosis of small town life, the assuring nature of the church, molestation survivors’ desire for privacy and the way predators play with that desire to get off the hook are all integral to the story and all expressed with astonishing delicacy and force. Don’t understand why personal reputation is important? Watch Spotlight. Don’t understand why people turn to religion for comfort or why sexual assault victims don’t come forward? Watch Spotlight.

Have neither of these problems? Watch Spotlight. There isn’t a better or more engrossing movie in theaters right now.

Leopold Knopp is a formerly professional film critic, licensed massage therapist and journalism student at the University of North Texas. The ideal solution is to never eat anything again. I’ve had a change of heart in regard to reader input. It is now welcomed and encouraged. Like Reel Entropy on Facebook, follow it on Twitter @reelentropy, and shoot questions to reelentropy@gmail.com.

1 Response to Spotlight a masterpiece, the year’s most authentic movie