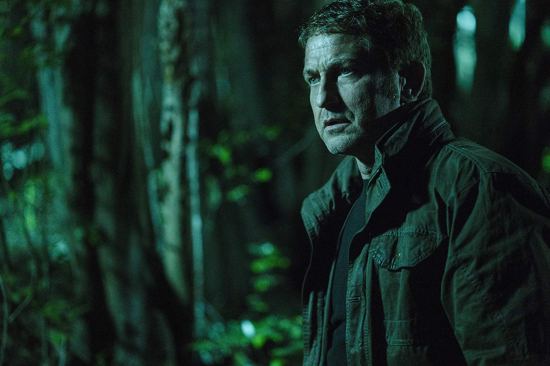 Keeping most of Angel has Fallen in the eastern backwoods both gives it a nice grimy tinge and mildly suppresses production costs. Images courtesy Lionsgate.

3/10 I really don’t want to think about Gerard Butler as a weirdo-James Woods type who makes movies to deliberately overcorrect for “liberal Hollywood” because he’s so talented, but it’s getting kind of ridiculous. The guy’s from Glasgow, but he’s spent the past decade self-producing these hyper-patriotic Die Hard knockoffs where he personally defends the president that all feel designed more for to deliver a political message and let Butler play out his ‘80s action hero fantasies than to entertain.

They’ve all got moments where a high-ranking official recites something mundane like the pledge of allegiance or the oath of office as a defiant statement against foreign forces, and his character is always thinking about retiring but learns that protecting the political hierarchy is the most important thing in the world, and there’s always more. They’re all full of awkward moments as they go out of their way to incorporate political ideology. Olympus has Fallen is basically all about gun control, and London has Fallen is much less gracefully about nationalism and paranoia, to the point that it drew attention for being kind of racist.

The latest entry, Angel has Fallen, is basically a big-budget, but still somehow cheap-looking, version of those conservative paranoia films where a righteous man is on the run to clear his name for a crime he didn’t commit. In the film, Secret Service Agent Mike Banning (Butler, who also produces) is dependent on painkillers and suffering from a concussion and significant spinal chord damage, all of which he’s hiding from his wife and employers. As always, he’s considering retirement, but also up for the Secret Service director position that should probably already be his after single-handedly saving the previous president from two massive security crises. On a fishing trip with the current president, Alan Trumbull (Morgan Freeman), the entire Secret Service team is wiped out by a surprise drone strike, with Banning and Trumbull the only survivors. Banning is framed for the attack, and spends most of the movie on the run across rural Pennsylvania and West Virginia from the FBI, as well as local law enforcement and militia groups.

Angel has Fallen is a much more welcome return to this paranoid world, where omnipresent terrorist organizations are equipped “better than the U.S. military” and pull off attacks every few years that make 9/11 look like child’s play, but are still far more expensive and far less effective than just flying planes at things.

The series moves from fictionalizing all of its world leaders to Photoshopping Morgan Freeman overtop of Donald Trump next to real-world heads of state. It’s a pretty strange, I really don’t know what to make of that.

Most of the series’ hallmarks are still there – generally lackluster special effects anchored by CGI explosions that look like they were drawn onto the frame in crayon, lazy and confusing action camerawork and desperate name-dropping of pop-political issues without any real investigation. Angel has Fallen takes a less explicit stance on things than previous installments, merely giving shout-outs to America’s underfunded military, a nonsensical and dangerous reliance on mercenaries and Russian interference in recent elections.

Angel has Fallen is a conservative movie, but distinctly not a pro-Trump movie. This is expressed merely by acknowledging the fact of foreign election interference, but gets into weird territory when Morgan Freeman is Photoshopped over real-world President Donald Trump next to real-life world leaders, many of whom were fictionalized in this same series just three years ago. There’s also the constant refrain of Banning and villain Wade Jennings (Danny Huston), who served with each other in the Army, referring to each other as “lions.”

Most of the real political skewing comes from the main plot, which lends itself to the type of persecution complex that’s common among current right-wing thought leaders. The movie also introduces Banning’s father, Clay (Nick Nolte), as a crazy, lives-in-the-woods-with-millions-worth-of-military-hardware type.

Nolte does a wonderful job of meeting Butler’s character with his own, generating a palpable family resemblance where none should exist.

What raises Angel has Fallen above its predecessor, outside of the basic ability to be conservative without being racist, is the basic existence of themes outside of its political ideation. The relationship between Mike and Clay Banning is particularly interesting – we’re introduced to Mike caught between wanting to spend more time with his wife and child, wanting to advance professionally and a traumatized body that seems capable of neither. The plot forces him into contact with his father Clay, an old tunnel rat who returned from Vietnam with severe PTSD and abandoned his own wife and child because he determined himself incapable of being around them, a decision he stands by and regrets at the same time. It’s pretty basic character mirroring, but the classics are classics for a reason. Mike’s decision to not resign from the Secret Service at the end, which, once again, is a decision he’s made in literally every movie in this series, has much more weight because it relates more directly to his arc and isn’t just an additional conflict that should have been thrown away.

It’s also got great density as an action movie. Even at 121 minutes, Angel has Fallen only ever pauses to breathe with Clay Banning’s introduction. Viewers are exposed directly to the exhaustion of Mike Banning’s situation, and his concussion gets incorporated into the sound design, a great touch that isn’t applied frequently enough. We see Mike struggle with the sheer number of people coming after him, but we never see him have to compensate for his disability. He’s in pain, but his brain doesn’t betray him at any point, and he continues to do things he shouldn’t be capable of doing throughout the movie.

In a series known for lackluster action, there are some encouraging signs of improvement. Mike Banning is often unarmed, so the standard technique of simply cutting to guns firing and people falling isn’t used often, and what shootouts there are have noticeably more consistent geometry. The movie starts with Banning trying to take on Jennings’ entire mercenary force in a training compound and ends in essentially the same situation, which is nice, and there are some visual callbacks, but the concept should have been taken much further – it feels like there are several ideas in these would-be twin sequences that got left on the cutting room floor.

Angel has Fallen is coming into theaters hotter than expected, with an opening above $20 million for a first-place finish in the late August mire. It’ll be the first entry to spend time at no. 1 in a series that has never been a huge moneymaker and seems to have survived mostly because of an internal will from Butler and writers Creighton Rothenberger and Katrin Benedikt, who only get story credits on Angel after writing full screenplays for the previous movies. It’s hitting the mark for audiences that have shown up, with a 95% audience approval ratting on Rotten Tomatoes to contrast against a 40% critical rating. It’s difficult to say if we’re going to come back to the world of Things that have Fallen, but money doesn’t seem to be an issue and it’s consistently finding its audience.

This entry was posted in Entropy and tagged #gerard butler, #london has fallen, #morgan freeman, #nick nolte, Angel has Fallen, Die Hard, Everything has Fallen, Gerard Butler has Fallen and he Can't Get Up, James Woods, Olympus has Fallen, Your pants have fallen. Bookmark the permalink.