Posted on November 9, 2018 by reelentropy

Where Myers’ mask looks pristine in many sequels, Halloween (2018) offers a textured, much older-looking version of the mask for a much older character. It’s a nice touch. Images courtesy Universal Pictures.

Yeah, there are 10 others, but this one is different! This one ignores the preceding continuity — well, the 10, 20 and 30 year anniversary sequels all did that as well, so I guess that part isn’t unique. This one brings back Jamie Lee Curtis — oh, no, a lot of sequels did that. But this one has her children — oh, so did the 20 year anniversary movie, H20: Halloween 20 Years Later. It looks like the only movie producers were hoping we wouldn’t forget about was the 1978 original.

Forty years after the events of the original Halloween, we return Haddonfield, Illinois to meet a Laurie Strode (Curtis) who has been unable to live a normal life. Her mind and decisions have been dominated by the unresolved trauma of the massacre 40 years prior. She’s become a prepper who obsesses over Michael Myers’ (James Jude Courtney, credited as “the shape,” with original actor Nick Castle reprising his role in one shot) legal proceedings, an obsession that has ended two marriages and estranged her from her daughter, Karen Nelson (Judy Greer), and granddaughter, Allyson Nelson (Andi Matichak).

In all seriousness, this 2018 release is a big deal among Halloween sequels because this is the first time since 1982’s Halloween III: Season of the Witch that original writer/director/composer John Carpenter has returned to the franchise, in this case only serving as the composer and executive producer. He’s been making music with his kids lately, it’s sweet.

– and it doesn’t come up nearly as often as it should. The first encounter between Allyson Nelson and Myers is the scene with the swooping guitar, and that’s the only scene the music really dominates. Most every other part of the movie it fades into the background of standard slasher nonsense.

Halloween H40 is one of the simpler ones. It has one two-legged goal – to modernize and continue the story of Strode. Each of those legs carries its own problems.

The biggest one is with modernization – modern slashers are really dumb. While there are foundational movies in the early ‘80s and Wes Craven’s unique reinventions of the genre in A Nightmare on Elm Street and Scream, slasher movies have remained in a largely stagnant state of pulpy decay since their granddaddy, 1978’s original Halloween. That’s not a good thing.

Halloween (2018) is, at times, just so dumb. Take the bus crash scene at the beginning when Myers escapes. Two hapless victims, a father and a child, stumble upon the scene, one of dreary fog on a lonely Illinois road as asylum patients mill about. The tension in the scene comes from the dangerous mental patients, any one of whom could be Myers, but after the victims leave their vehicle, the crowd just disappears. Like, from one shot to the next, we go from about a dozen strange and potentially dangerous people to absolutely no one. The duo continues to play it like they’re dealing with this situation that has just vanished and are, of course, eventually killed by a hidden Myers, but for the life of me I can’t figure out why this scene plays out the way it does.

There’s another scene late in Myers’ rampage when Allyson Nelson finds herself running frantically through the woods behind her grandmother’s house. She stumbles onto the business end of her backyard shooting range. Strode uses mannequins for target practice, and Allyson Nelson surely knows this, but once she’s there, we get this extended sequence of her screaming in terror at the shot-up mannequins – and this is genuinely meant to be a scary scene. After an hour or so of running from Michael Myers himself, the movie stops for this scene full of shots of the camera zooming violently in on a screaming Nelson and shot-up mannequins rapidly cut between each other, as if to imply that she’s being assaulted or in fear of being assaulted by these goofy looking things.

Going back to the old Howard Hawkes quote, “A good film is three good scenes and no bad ones,” how can an otherwise dramatic horror movie be taken seriously when it stops for this kind of silly scene?

It’s not a particularly gruesome movie, either. Myers has always been less of an onscreen violence guy and more of a creative corpse arrangement guy, and there’s some decent work in H40 on that front. He scoops a guy’s brains and eyes out of his head and makes him into a jack-o-lantern at one point, that’s nice, and the raw bodycount is obviously upped – more than quadrupled, by my count. He only killed three in ‘78, which the new movie makes sure to point out. 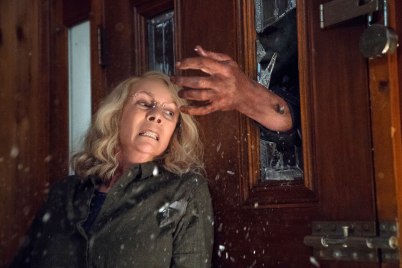 After preparing for another encounter with Myers for decades, after building this entire house as a trap specially designed for him, Strode immediately backs herself into this sequence, losing track of Myers and simply walking backward toward where she should already know he is. Back to a wall, Strode, not back to an easily breakable door!

In addition to upping the bodycount to something that would register in this strange hell-world of unchecked mass violence – Myers’ 13 killed and four injured would put him behind no less than four other rampages in 2018 alone, including two that took place just in the span of time since this movie was released – H40 also includes some modern conceits. Allyson Nelson’s boyfriend takes care of her cell phone by throwing it in a vat of pudding when they break up, solving a common plot issue in slasher movies set later than 1995 in a character-driven way, and there’s a chubby “nice guy” character following her around for Myers to dispatch. It’s clearly set in 2018 and topical in the hollow, haphazardly pandering way slasher sequels tend to be.

That’s the other element of making a movie that is at once a 40-years-later sequel and a rebooted Halloween for 2018 – in the post-Columbine, post-Sandy Hook, post-Parkland County world, the fetishization of Myers’ case doesn’t make sense. Many sequels try to cultivate Myers’ as having this mystique because of his particularly disturbing crimes, but his crimes are simply not all that disturbing by today’s real-world standards. The film opens on a pair of outragously British podcasters visiting Myers in his institution and desperately trying to get him to speak. They even “called a friend at the Attorney General’s office” so they could borrow and show him his old mask, the Captain Kirk mask that he stole at random out of a hardware store  and wore for about 12 hours of his life.

“You can feel it can’t you? It’s a part of you, Michael!” Not exactly.

Then these same podcasters visit Strode and try to establish some sort of cosmic link, try to imply that she’s the yin to Myers’ yang and not some random girl who’s suffered through a traumatic event.

He killed three people in one night because he lacks the mental capacity to distinguish right from wrong, but you’ve had two failed marriages in 40 years because of mental illness stemming from severe trauma you never should have been subjected to. That’s basically the same thing, right? Again, not exactly.

This movie can’t seem to decide what it thinks of Strode. In her first two scenes, she alternates between abrasive and unyielding and crying in public for absolutely no reason, which I guess is near enough realistic for someone defined by her trauma, but it’s difficult to glean much of what you need as a viewer trying to get a handle on this character from those two scenes. From there, the camera kind of supports the notion that Strode has become Myers, recreating several iconic moments from the original with Strode taking the predator’s place in the frame. I love the Alien-to-Aliens arc, but this movie needed to lean a bit harder in that direction to really claim that.

Halloween (2018) came damn close to resetting the record for October opening weekends for the second time in 2018 after Venom blew the doors off the box office Oct. 5. It’s a record that really ought to belong to a Halloween movie, however much weak this one might be. A sequel is, of course, in early development.