Posted on November 6, 2018 by reelentropy 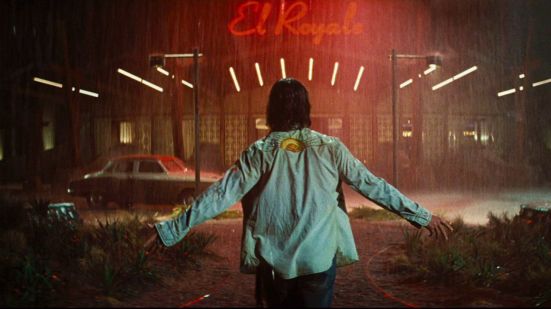 After breaking out as an action star in Thor, Chris Hemsworth doesn’t get nearly enough credit as a dramatic actor. His versatility is on full display in Bad Times at the El Royale as a freakish cult leader who crashes the movie two hours in. Image courtesy 20th Century Fox.

8/10 I remember an era in my youth, before Marvel, before Lord of the Rings, when you could go see a movie and have it just be a movie. Any given show was expected to provide its own, complete world with a beginning, middle and end that made sense fully within its own context, with foreshadowing for sequels that weren’t guaranteed and pandering to fans of esoteric source material kept to a bare minimum. Movies that didn’t have a history in other media. Movies that couldn’t skate by on being the sequel to this or a prequel to that or “from the producers of” some other damn thing. Movies that had to stand on their own two legs, made for audiences that wouldn’t be satisfied with anything less. Good times.

Bad Times at the El Royale opens with a long take of Felix O’Kelly (Nick Offerman) burying something in the floorboards in a room at the El Royale Hotel, straddling the border of California and Nevada somewhere just west of Reno. Ten years later, four strangers, vacuum salesman Seymour “Laramie” Sullivan (Jon Hamm), Father Daniel Flynn (Jeff Bridges), blues singer Darlene Sweet (Cynthia Erivo) and the mysterious Emily Summerspring (Dakota Johnson), arrive at the hotel, now all but abandoned, each with a secret to hide and hoping for a smaller crowd. The group clashes in an extended second act before judgement arrives in the form of California cult leader Billy Lee (Chris Hemsworth).

It is so refreshing, it is so much fun to truly escape into a movie again. Bad Times at the El Royale is a completely uncompromised dinner-theatre style murder mystery with a bizarre story structure — two seemingly eternal scenes in the lobby, one before the characters’ secrets are revealed and one after, make up the first and third acts, which sandwich an equally long-feeling second act filled with flashbacks and shocking revelations. It’s a structure that’s uniquely tailored to this bizarre story, a seven-car pileup of characters who all have their own backstories and motivations woven throughout the narrative.

Control of information is absolutely paramount to Bad Times working as well as it does. Every flashback and every reveal is placed at the perfect point in the story — there’s no frontload of information that’s just going to get repeated closer to the point that it becomes important anyway, you see everything at the exact point that it comes into play. The result is a movie that keeps you on the edge of your seat for a full 141 minutes, that manages to feel long and have that be a good thing.

Many have compared the film to Pulp Fiction because of its segmentation, but a much more closely related Quentin Tarantino masterpiece is The Hateful Eight. It’s almost exactly the same plot, really — a group of strangers, each with important backstories that flesh out at just the perfect time over the course of the picture, all clashing and competing — not for screentime, but for their lives. Violence in the world of Bad Times is sudden, unexpected and decisive.

Bad Times really does feel like its own little world. All present vehicles are quickly disabled, so the characters are going nowhere when the violence starts. In most flashbacks, mountains rise in the background like the world’s most majestic prison bars, or perhaps the jaws of a bear trap, dooming characters to their fate.

Bad Times at the El Royale opened at no. 7 with $7.1 million, and in four weeks has already dropped out of all but 322 theaters. Despite a robust ad campaign and a warm critical reception, it’s only made $29 million worldwide against a $32 million budget.

It’s really only three movies that did well in that time period. This was the highest grossing October ever with $820 million, and Venom, A Star is Born and Halloween made up almost 60 percent of that with a combined $481 million. Bad Times sits at no. 10 for the month. There just wasn’t much room for the little guy here.