Second time is more charming, but still lacks that special something

I’m not sure how I feel about the supersuits for some of the newer Avengers. These are a perfect blend of cartoonish and feeling like they’re necessary to the characters, but I almost feel like that should go one way or the other. Images courtesy Walt Disney Studios Motion Pictures.

8/10 Ant-Man and the Wasp is wonderful. Unfortunately, because I’m pathologically incapable of enjoying Marvel movies, it still leaves me wanting.

The film joins The Avengers’ size-shifting wonder Scott Lang (Paul Rudd) at the end of his long house arrest sentence following his actions in Captain America: Civil War. He dreams he receives a message from Janet van Dyne (Michelle Pfeiffer), the wife and mother of former associates Hank Pym and Hope van Dyne (Michael Douglas and Evangeline Lilly) who was lost in quantum space decades ago when she sacrificed herself to stop a missile. They drag Lang out of his home in the hopes that he can help them recover Janet, but their search is harried by Ava Starr (Hannah John-Kamen), a former SHIELD assassin whose body is disintegrating and needs quantum energy to preserve her life.

Where Ant-Man felt like a thinly veiled retread of other, better origin stories, making its unique elements blend into the background, Ant-Man and the Wasp takes everything that was unique about the first movie and steers gleefully into them. Pym said in the first movie that if his shrinking technology got into the wrong hands, it would be chaos. After a series that started with Iron Man’s billion-dollar flight suits, this sounded like an exaggeration. But in Ant-Man and the Wasp, they bring the shrinking technology out into the world, and it is chaos. Glorious, glorious chaos.

They’ve got an office building that shrinks down into a suitcase, they’ve got a whole fleet of cars that they shrank down and carry around in a Hot Wheels collector’s tin, Starr can phase through matter and it’s awesome, Hope van Dyne has these blasters can shrink or supersize other objects — the wonderfully inventive use of superpowers that has been present in the best Avengers movies gets applied here, and it produces some of the most fun action in a series where that’s a known weakness.

Ant-Man and the Wasp is also much more character-focused than its predecessor, again on what makes these characters unique in the MCU. Lang is much more of a loser than this series has ever had – he’s friends with his ex-wife’s new husband, for Christ’s sake – and they draw more from that for comedy, with more jokes with him consistently at their butt.

Pym is also more of an ass than the MCU otherwise possesses, and the plot is littered with people he’s alienated – this aspect is much weaker, since it’s based more on descriptions of things that happened years ago and doesn’t really came to any kind of head.

I still somehow feel like Ant-Man and the Wasp should have been better, but for once I can’t put my finger on why. There is one clear problem though, that, much like the characters, makes itself seem smaller than it is — motivation. Pym is building a device to search for his wife. Starr wants to steal that device so she can also search for Pym’s wife. Starr needs Janet van Dyne’s weird quantum space energy to stay alive, and Pym is worried that it might hurt her, but says they’ll work something out, but then they don’t work anything out and Starr spends the entire movie chasing them so she can do something they were already doing. 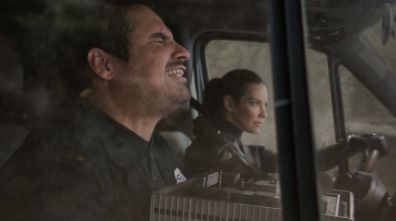 One thing Ant-Man and the Wasp steered away from, despite it being easily the best part of Ant-Man, was Luis’ (Michael Peña) surreal narration scenes, of which it has only one. In exchange, he gets more directly involved in the action.

The theme of Pym alienating everyone who knows him probably would have made this work if they’d sewn it more strongly into the film – there are plenty of great movies where the conflict could be solved with teamwork, but that’s prevented by the main characters hating each other, and I think that’s what Ant-Man and the Wasp was going for. Instead, I’m left asking why Starr didn’t just work with them, or at least wait on them to successfully find van Dyne and try to kidnap her instead of stealing an entire office building.

Some critics are actually praising this movie for not being too intense after the bummer that was The Avengers: Infinity War, and I really don’t know what to say to that. If Marvel has you so turned around that you’re praising Ant-Man and the Wasp for lacking, you probably shouldn’t be reviewing movies anymore.

Ant-Man and the Wasp fell off the top of the box office immediately, and it’s only made $394.2 million worldwide after four weeks. That’s nothing to shake a stick at, but it’s definitely not Marvel money. With limited box office dollars to spend, people don’t seem to care about this character, who hadn’t done enough before this sequel to separate himself from the rest of the cast. Maybe this film and a starring role in Avengers 4 will change that.