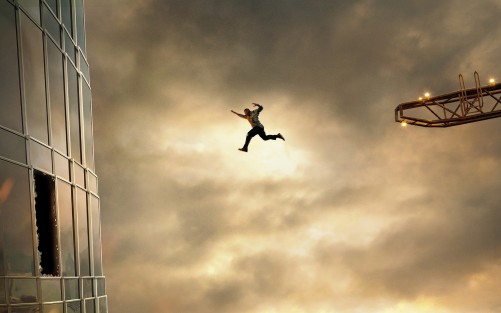 This is it. This is the whole movie. Images courtesy Universal Pictures.

Skyscraper follows Will Sawyer (Dwayne Johnson), an FBI agent-turned security contractor after a hostage situation gone wrong left him with one leg severed below the knee. The movie opens on him evaluating security at The Pearl, the newly completed vertical city in Hong Kong that stands as the tallest building in the world by almost 800 feet. After Sawyer gives it the green light, a gang of international terrorists de-activates the building’s sprinkler system and sets it on fire. With him a kilometer away and his wife and children locked above the blaze, Sawyer must find a way back inside the building.

Yes, this movie has The Rock, but it’s not The Rock we’re used to. Johnson brings the same reckless commitment to this role as he does to all others, but this time it’s not channeled into joy, it’s channeled into fear. As Sawyer, he wears his silver beard just past the point of stubble, and rarely smiles. His prosthetic leg, which features prominently in the action, clearly weighs on his confidence. This is a man defined by paranoia for his family’s safety, even before they’re threatened by terrorists, and the feeling that he can’t adequately protect them on one leg. 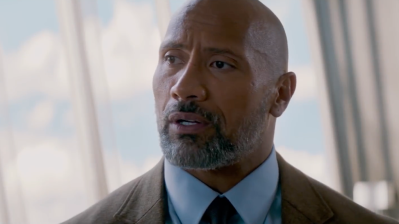 It’s strange to see a different side of Johnson. He’s always sympathetic, but this feels like the first real everyman he’s played.

When his fears are realized, Sawyer’s only option is to climb an inactive crane and leap into the building, Skyscraper’s defining sequence. Sawyer goes through all of his character growth in this one set piece, and it’s got the more potential as a nail-biter than anything else in the movie – despite being set in a 225 story building, this is one of only two scenes that focuses on a fear of heights.

The problem with this scene being so great is that it’s stuck in a movie with about a half-dozen other set piece that can’t live up to it, and end up kind of pushing it out of the movie. Skyscraper is 102 minutes long, and this sequence that contains everything important to the story is only about 10 of those minutes. What’s worse, it and all the other sequences seem trimmed down to help each other fit in the runtime. This is a suspense movie, the whole point of which is to keep viewers on the edge of their seats as long as possible, but it keeps relieving the peak tension minutes before it needs to as a matter of runtime.

You don’t even need villains in this movie. Just have a fire break out by accident, and away you go.

This isn’t a movie about dumb terrorist plots or how hard it is to get a zoning exception in Hong Kong. This is a movie about a dude trying to save his family from a burning building. Everything else is junk.

This entry was posted in Entropy and tagged #dwayne johnson, Skyscraper. Bookmark the permalink.