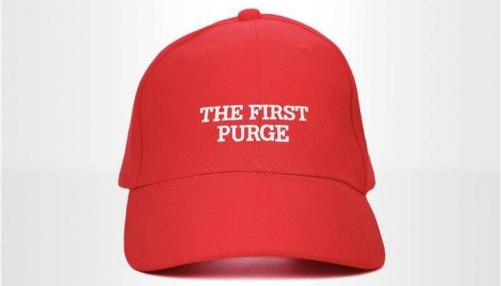 This is some of the cheekiest shit I have ever seen. Image courtesy Universal Pictures.

9/10 The Purge movies continue to baffle me with cultural staying power that outsizes their box office numbers. What started as a cut-rate home invasion movie with an elaborate premise has captured the American imagination, fitting like a glove onto economic and racial anxieties that have only grown worse since the series’ debut.

But The First Purge immediately becomes the only entry that I would call “good.” It might even be great.

As the real U.S. becomes more and more dystopian, the series has approached closer and closer to reality, and this continues with The First Purge. The first movie’s James Candin (Ethan Hawke) was eager to justify the annual night of lawlessness after making his fortune from it, but The First Purge addresses the practice explicitly and exclusively as what it is – a targeted holocaust of poor minorities. In order to encourage participation in the Staten Island experiment that would become the annual tradition, residents are offered $5,000 to simply stay on the island through the night, with bonuses for any lawbreaking. The borough quickly becomes populated only by those who can’t afford to turn that money down. When “participation is low” – when not enough brown people are murdering each other — the government sends in a pre-hired gang of mercenaries, many of them dressed in Klan robes and SS costumes, to exterminate the islanders. The less straightforward riots of previous movies give way to what is simply an ethnic cleansing.

The First Purge makes itself daringly clear. From the first poster onward, the film is much more aggressively topical than its predecessors, complete with a “pussy grabbing” scene and imagery explicitly mirroring the Rodney King beating and the 2015 Charleston shooting, among other flashpoints of racial violence.

Far too many movies rely exclusively on shared memory for their appeal. The First Purge corrupts this tendency. Instead of guiding viewers through warm nostalgia, this film guides us through our worst memories as a culture.

Just as it draws from the historic abuse of black Americans, The First Purge also draws from the cinematic reaction to that history with its main character Dmitri (Y’lan Noel), a seemingly invincible drug kingpin who draws heavily from the blaxploitation heroes of the ‘70s. His acts of violence are set aside graphically, producing glorious sprays of viscera in a surprisingly gore-less film. The visual story of ethnic cleansing becomes one of minorities standing up to uniformed forces as the film continues.

This is probably why I cared much more about Dmitri than about any other Purge protagonist. Where previous movies do attempt to follow a community across a handful of characters each with their own story, The First Purge weaves the story of its community into one character, who emerges as the joining point of all its storylines.

With series writer/producer James DeMonaco aiming higher with his allegories, new director Gerald McMurray aims higher with scene-to-scene considerations. Purgers are given contact lens recording devices that glow in the dark, given them a predatory quality. Dmitri’s rampage through a dimly lit apartment complex in the finale contains some of the series’ best action.

At once an entertaining action-horror film that can deeply affect viewers with its cultural implications, The First Purge finally capitalizes on the potential of this strange series. It’s my far-and-away favorite of the franchise.

This entry was posted in Entropy and tagged blaxploitation, Ethan Hawke, Gerald McMurray, James DeMonaco, The First Purge, The Purge. Bookmark the permalink.