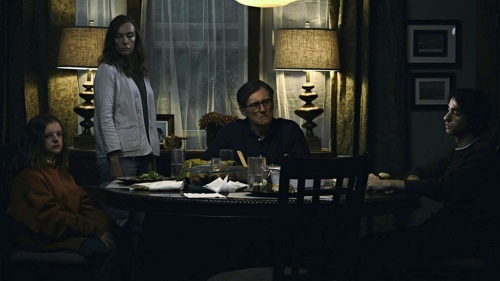 Hereditary’s absolutely spectacular set design contributes mightily to its atmosphere. Everything about the purpose-built set feels off-kilter and out of place. The shadows always seem longer than they should be, and you can never really see as much as you think you should. Images courtesy A24.

9/10 And now for Hereditary, this year’s “scariest movie ever made.”

The film begins with the funeral of the Graham family matriarch, Ellen, after which her daughter Annie (Toni Collette) begins to see strange things around the house. The family soon falls victim to a terrifying inheritance the grandmother left behind.

This feels like a movie that absolutely should not work, primarily because of its cast of entirely passive characters. The only character with any kind of agency, or even a discernable goal, is Ellen, who’s dead before the film’s start, and many of the film’s most horrible events happened in the past and are related through exposition.

The danger of making a movie without any character agency is you wind up with something that meanders to no real point – character is action and stories are about characters, so if your characters can take no action, oftentimes you’ve got no story. Hereditary is built specifically to get around this problem. It gives Annie and her son Peter (Alex Wolff) enough to do that they don’t feel as helpless as they are, but much more important is the camerawork.

From the very first shot, it’s made clear that we’re watching people who have no control over their lives from an omniscient, completely outside viewpoint, and the film sticks rigidly to that shooting philosophy. It’s extremely rare to get a shot from any given character’s perspective, and even when one does appear, the perspective is somehow muted – you can extrapolate what the character thinks they’re looking at, but what we’re presented is the objective reality of the situation. As the circumstances intensify, the camerawork doesn’t, and the film refuses to devolve into common techniques associated with modern horror.

While the scares don’t jump, they do feel a little cheap in hindsight. By the end of Hereditary, you realize it’s mostly dealing in scaled-down cosmic horror – fear of the unknown and uncontrollable, but represented in this case by your grandmother and her gross cult friends. Much of the movie’s overt creepiness is just people standing at the edge of the frame or in the shadows where they’re barely visible, and while that is very creepy, it feels worse than it is after you go home to your own dark apartment and have flashbacks to scary shots from a similar setting. It reminds me of Paranormal Activity – God, more than 10 years ago now – where it wasn’t that the scares were particularly potent, it’s just that they were in too familiar of a setting.

On the other side of the equation are the shock value scares that almost always feel hollow in hindsight, though the last handful in the film’s overstimulating climax are harsh enough to break through.

At the same time, the film does more with Charlie’s (Milly Shapiro) tongue clicks than most horror movies do with two full hours of haunted-house shenanigans.

There’s a key moment – when the film jumps straight from avoiding dream sequences to having a dream sequence within a dream sequence – where Hereditary begins to lose track of itself as it heads toward an overstuffed climax of gore and terror. It’s an admirable effort from a film that seems like it’s trying to make up for the calmness of its first two acts, but feels a little too disorganized. It’s not afraid to push the envelope on gore and nudity even to the point of looking a little bit silly, and that ultimately could work to the film’s detriment depending on the viewer.

What really sticks the most about Hereditary is the emotional violence of two key scenes in which Annie and Peter scream at each other for past wrongs. Hereditary has often been compared to The Babadook, which is the flagship for the resurgent trend of ghouls as a metaphor for family strife, but it takes a much different approach – while the supernatural horror typically runs parallel to the unhappiness it’s connected with in the metanarrative, Hereditary features two separate unsalvageable maternal relationships at different points in their maturation. Peter is only coming into the age where he can challenge his mother, and what we see is the start of that relationship’s deterioration. But the supernatural elements are tied to Annie’s relationship with her mother, which was left to rot in life and is now completely beyond recovery after her death.

There are several interpretations about what the title “Hereditary” is meant to refer to, the most obvious being the family’s history of schizophrenia, but I think it’s meant  to refer to this parental dynamic repeating itself, which is a far more relatable horror.

Hereditary has also been mentioned often in the same breath as the 2016 masterpiece The Witch, to which it could easily be construed as a spiritual or even literal sequel. These films, along with The Babadook, are probably the most public faces of the recent “smart horror” trend of arthouse horror movies getting wide releases and some very similar hype advertising – The Witch was compared frequently to The Shining, and Hereditary has similarly been called this generation’s Exorcist — only to release to very similar audience receptions. Over the past five years, a tangible and delicious culture war has been brewing between the jump-scare based Conjuring series, which proved horror could compete meaningfully in the summer months, and this Babadook brood of movies that only seem to satisfy a handful of viewers, but aren’t actual garbage.

The Conjuring, Insidious and their spinoffs’ sustainability is based in little things like brand recognition and consistent commercial success, whereas smart horror is based on A24’s ability to continue to find small-time writer/directors turning big-time debut features into major festivals, only to see them crash and burn commercially.

This entry was posted in Entropy and tagged #A24, #the witch, Alex Wolff, Hereditary, Milly Shapiro, Paranormal activity, the babadook, The Conjuring, Toni Collette. Bookmark the permalink.