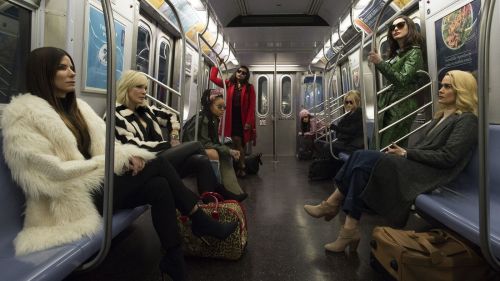 After five years and change in prison, Debbie Ocean (Sandra Bullock), sister to the late Danny Ocean (George Clooney), has planned an impossible heist. With the next year’s Met Gala themed around European royalty, Ocean assembles an all-star cast (Cate Blanchett, Mindy Kaling, Sarah Paulson, Awkwafina, Rhianna and Helena Bonham Carter) to ensure the presence of and steal the Toussaint, a $150 million diamond necklace associated with the Crown Jewels.

Breezy, glitzy and distinctly feminine, Ocean’s 8 is everything you want from a high-production quality girl’s night out movie.

What’s striking is how straightforwardly the transition is applied. There’s very little about the new characters that’s tied to gender, but the film itself is drenched in feminine appeal. Some of this comes from the dress-up game of the Gala – the movie harbors a pleasantly surprising amount of venom for the fashion journalism industry – but a lot of it comes from how simply it’s all executed. The main body of the movie is short, silly problem-solving scenes leading up to the heist with a full cast of charismatic actresses having fun and doing their thing.

Performances seem to dictate the tone and pace of the movie, with camerawork and technical elements mostly taking a back seat. Though the presence of legends like Anne Hathaway and Carter certainly go a long way, the movie benefits greatly from strong performances from its lower-tier talent.

As with certain other movies, the gender-swap doesn’t extend to the director’s chair – the job went to Seabiscuit director Gary Ross. There was some outrage, rightly, when he was announced, which died down pretty quickly, not rightly, when Olivia Milch was attached as a co-writer. Changing the gender or color of the cast is good for representation, and representation does mean something, but true diversity is not going to come to Hollywood until it comes regularly to the director’s chair, and it won’t come to this country until the stories we tell and the culture that forms from them come from a more diverse pool of storytellers.

The reception for Ocean’s 8 has been lukewarm, both critically and commercially – the $70 million movie opened with $41.6 million and is sitting at $117.8 million worldwide as of this writing, which is fine. A sequel looks likely, but there don’t seem to be any solid plans at the moment. It feels like the movie has mostly been forgotten about already as one of the least interesting offerings in a crowded release schedule, and that’s nobody’s fault. The only blame that can really be laid is at Ocean’s 8’s own feet for not standing out more.