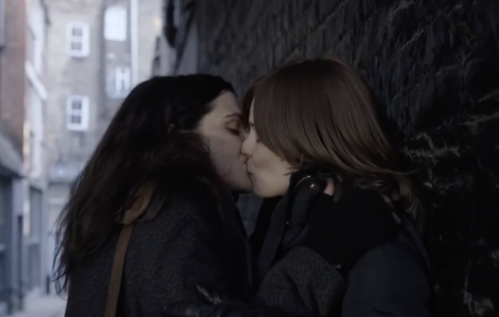 5/10 In a rural England synagogue, Rabbi Rav Krushka (Anton Lesser) speaks about the creation of the angels and man and our freedom to choose our own destiny before collapsing, succumbing to his pneumonia in front of his congregation.

In New York City, Krushka’s only child, Ronit (Rachel Weisz, who also produces), learns of his death and races home. She was cast out of the arch-conservative Orthodox Jewish community some years earlier for her relationship with another young woman as an adolescent, and is not welcomed back. Though she came primarily for her inheritance, she finds that the Rav wrote her completely out of his will, and the local newspaper explicitly mentions he had no children.

In addition to quickly finding she is unwanted and has no real reason to be there, Ronit learns her adoptive brother and the Rav’s closest student Dovid Kuperman (Alessandro Nivola) and her childhood lover Esti (Rachel McAdams) have married.

What I want to talk about with Disobedience is its mystifying narrative. It is a rich, complex story about the toxicity of this inbred Jewish town that by its nature raises more questions than it answers.

In this story about a protagonist with no clear goals, who is the villain? Is it the suffocating expectations of the community, as represented by Dovid? Is it Ronit herself?

Is it Esti, the housewife who used the death of a beloved community leader as an opportunity to summon a woman with whom she planned to be unfaithful? Is it the Esti of yesteryear, the lesbian in an intensely heterosexist community who did not fight for her own life, dooming not only herself but her lover to a lifetime of loneliness and perfunctory sex acts?

The narrative shifts around this strange love triangle. While it starts as distinctly Ronit’s story of returning to an oppressive community, it soon becomes Esti’s story of having lived in it all her life, but the film’s final scenes belong to Dovid. The choice to delve into his perspective shows him as suffering from the society as well. Where Disobedience could easily have been a simple forbidden love story, and at times seems like it wants to be, this third perspective that portrays even the most respected member of this community as isolated and compelled by it makes it a much more interesting movie.

Technically, Disobedience is pretty hit-or-miss. Some of the shots, particularly around the Rav’s death and Dovid’s climactic sermon, are spectacular, but many more are mundane. It uses costume design to full effect to reinforce the oppressive atmosphere, as well as a dull blue colorscheme that gives way to warm, sunny yellows when Ronit and Esti elope. It’s an accurate but well-used technique that doesn’t rise above better uses in other movies.

The refusal of Dovid and other community members to touch Ronit, lest she infect them, is one of the great details that really sells how horrible this town is on people who don’t fall in line with their standards.

Along with its closing scenes, this sex scene is what leaves the most lasting impression of the movie, and based on the marketing it’s what they think a lot of people will be heading to theaters specifically for. It also helps position Weisz for an Academy Award campaign down the road, which she seems to have been angling for recently with this and Denial. Weisz won Best Supporting Actress in 2006 for her performance in The Constant Gardener, a personal favorite of mine.

The heavy emphasis on this scene and Weisz’ apparent hunt for another Oscar connects Disobedience with a very dark history of LGBT exploitation in Hollywood.

There are some dangerously disingenuous lines of thought that intersect here. There’s the idea that playing off one’s own sexuality is a courageous thing to do — an idea that is built on the widespread stigmatization of LGBTs, and also on the assumption that Hollywood stars are mostly straight, which is absolutely not true and ties right back into that same stigmatization, as well as the more specific problem of bisexual erasure.

Then there’s the idea that sex is still a particularly shocking thing to show onscreen, which, if you’re really going to push it as far as they do in Disobedience, I’d call it more disgusting than shocking, but OK. Now we’re running aground of Western society’s discomfort with sex in a negative way by taking something we all need to be more comfortable with and playing it for shock value.

As interesting as the film is once you’re sat down and watching it, the methods and ideas surrounding how they’re trying to get you into that seat are dated, dubious and dangerous.

This entry was posted in Entropy and tagged #lesbians, #rachel mcadams, bisexual erasure, Disobedience, Heterosexism, I know it when I see it, Orthodox Judaism, Rachel Weisz, sexploitation. Bookmark the permalink.