Posted on November 8, 2016 by reelentropy

The eye contact games are subtly one of the stronger parts of Denial. Images courtesy Bleeker Street.

Man, Oscarbate movies really suck. If you know what you’re looking for, they feel way too much like an advertisement for something you couldn’t buy even if you wanted to. They’re just, they’re not fun to watch.

Denial is based on the autobiographical History on Trial: My Day in Court with a Holocaust Denier by Deborah Lipstadt. It follows Lipstadt (Rachel Weisz) through said lawsuit, brought in 1996 by Holocaust denier David Irving (Timothy Spall) and finally brought to court in 2000. Irving accused Lipstadt of libel for calling him a liar in her 1993 book about the history of Holocaust denial, and he filed in the U.K. where the burden of proof in libel lawsuits falls on the defendant, not the accuser. Lipstadt must prove that Irving intentionally ignored the facts of the Nazi genocide or otherwise settle out of court and give legal validity to the claims that it never happened.

Everything about Denial is built around the goal of getting its lead actor an Oscar, and everything wrong with it flows through the problems with its main character. 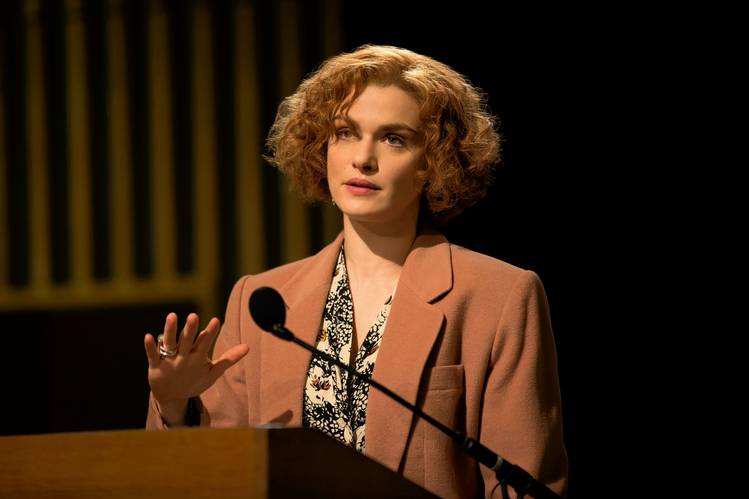 I love Constantine and The Lobster and The Constant Gardener is one of my favorite movies, but Rachel Weisz is just not a strong enough actor to carry this movie. She probably would have given a much better performance if she had been given a better character. Only the most talented actors wouldn’t have drowned the way she does in Denial.

The central problem with Denial is that it’s a courtroom drama, but the main character isn’t a lawyer. She isn’t even allowed to testify. Lipstadt has no agency in her own movie. It focuses on her intently, but in many scenes, she can’t really do anything.

When she does get to do things, she takes the opportunity to tear into her lawyers for winning the case handily. Lipstadt hired Anthony Julius (Andrew Scott) and Richard Rampton (Tom Wilkinson), two of the highest-profile lawyers in the U.K., to represent her, and from that point they never let the situation leave their control. Everything that happens in the case happens according to their design. But in several scenes, Lipstadt questions their logic on not allowing her or any survivors to testify, and they explain clearly and in detail that Irving knows how to undermine and humiliate survivors and they don’t want to give him that opportunity.

A reasonable person would say something along the lines of, “Wow, you’ve clearly put a lot of thought into this. I guess you really are the best lawyers in England. Carry on.”

Lipstadt, instead, says something along the lines of, “You are dumb! Why isn’t the English legal system more like America’s? Holocaust denial is bad.” Then she starts crying.

I turned 8 two months after this case was decided, I don’t know anything about the real-life Lipstadt or any of these people other than what I’ve read. But this fictionalized version of her is stupid and panicky, and she spends most of the movie doing stupid, panicky things. She has these big melodramatic reactions every time she thinks something goes slightly wrong, and then the music swells and she has one of several “Oscar moments,” and then her lawyers shrug off whatever stupid, panicky idea she had and continue as they’d planned. It’s not fun to watch at all.

Timothy Spall is wonderful. It’s tantalizing to see him with much more breathing room than he normally gets, but still not nearly enough.

It doesn’t help that, by contrast, Irving, Julius and Rampton are very fun to watch. Irving is a skilled manipulator, but also an egotist, and Julius and Rampton structure their case masterfully around using that against him. To get him to agree initially to a trial by judge, denying him the 12-person audience of uneducated people he could have played to, Julius says Irving’s reasons for denying the Holocaust are too complex to present to a layman, and Irving agrees to skip the jury immediately. Their courtroom strategy carefully tiptoes around calling witnesses so Irving doesn’t have anyone vulnerable he can take advantage of. Rampton spends the entire case denying Irving the validation of eye contact just to fluster him. It’s a meticulous suffocation of a dangerous enemy that incorporates emotion, personality and plot, everything Lipstadt’s much bigger portion of the movie needs more of.

The frustrating main character could have been easily remedied by actually delving into her point of view with more emotional context about how the Holocaust is viewed during this time period and how denial affects survivors. It feels strange to say this needs to be explained, but Denial requires a much more detailed understanding of these issues. It’s not enough to know the Holocaust was bad and denial is stupid and also bad. This movie delves into the details of deniers’ reasoning and motivations and how they gather and operate. We need to feel the impact of being told the camp you and your family were sent to die in didn’t exist. We need to understand on an emotional level why a known kook making these claims can’t just be ignored. Lipstadt is clearly aware of the emotions at play here, and if the movie did something to put viewers on the same page instead of assuming we’re already there, she probably wouldn’t seem like such a stick in the mud.