Justice League is one of the most pathetic, bafflingly awful attempts at putting together a film in cinematic history. It is a slapdash mess of stupid editing decisions, poorly thought out plotlines, half-finished special effects and lazy production design. It is utterly, obviously subpar and stinks of multiple parties at various points throwing their hands up and saying, “close enough.” It is antithetical to the possibility film represents as an art form and should never have seen the light of day.

Spoilers for this anticlimactic, pulseless whimper of a film after the jump.

In the aftermath of the death of Superman (Henry Cavill), Batman (Ben Affleck) and Wonder Woman (Gal Gadot) organize a team of metahumans to combat potential future invasions from outer space. Once the band is all together, instead of replacing Superman like they were meant to, they dig up his grave and resurrect him with magic technology from Apokalips — just as its herald, Steppenwolf (Ciarán Hinds), arrives to conquer Earth.

Justice League is an obviously incomplete movie. Prominent moments from the marketing are missing, and a key plot point in which Steppenwolf claims the crucial third motherbox — the macguffins we’ve been conditioned to pay special attention to as the entire plot hinges on them — is simply skipped. Not as in, “it happens offscreen,” the event is just skipped.

Given the wacky plot jumps of previous movies in this series that didn’t suffer from a studio mandate that they be under two hours long, it is almost impossible to know the full scope of what’s missing from this movie.

All of the heroes look pretty bad, but of particular note is Cyborg and his unnerving stagnant shimmer effect. Light is meant to dance off his chrome exterior — whether or not there actually are any lights on him in a given scene — but it instead sits eerily still upon him.

The first thing to bear in mind is that, be it because of poor camerawork or that they literally never left the soundstage, every single background in Justice League looks fake. It looks like the only real things on screen are the actors — and whenever something even vaguely athletic is called for, even they don’t look like they’re really there. This entire $300 million 2017 blockbuster looks like it was shot using ‘70s era rear-screen projection technology by a production crew that didn’t know the lighting tricks required to sell that illusion. The backgrounds themselves seem not completely rendered, particularly those from the climactic battle in rural Russia — “It’s uninhabited!” — which aren’t vaguely recognizable. They’re tough to describe because they don’t look like anything. You can barely make out what they’re shaped like.

Where the best computer effects are invisible because they look so much like part of the photograph they’re in, the ones in Justice League don’t look like anything but computer effects. It is a Jackson Pollock painting of CGI — wild splashes of the medium that never combines to form something even vaguely comprehensible.

This movie is the opposite of Blade Runner 2049. Where every frame of that film is a meticulously planned painting, not a single shot of Justice League feels like it was thought completely through or executed with any degree of detail.

Several scenes are nonsensical. In the opening sequence, Batman captures a villain, then lets him go to fight a parademon, then the villain chases Batman down so they can have a redundant expository discussion about Superman’s absence. A scene in which Wonder Woman stops a bank robbery, though one of the less objectionable in the movie, doesn’t make any sense or have any effect on the plot. Flash (Ezra Miller) and Cyborg (Ray Fisher) both get multiple scenes to speak with their fathers, material that should have been relegated to their own movies.

When Superman returns from his literal grave and reunites with his fiance Lois Lane (Amy Adams), she tells him, “You smell good.”

They don’t have time for a key, obviously missing plot point in which Steppenwolf collects the last piece of his doomsday weapon.

But they have time for “You smell good.” 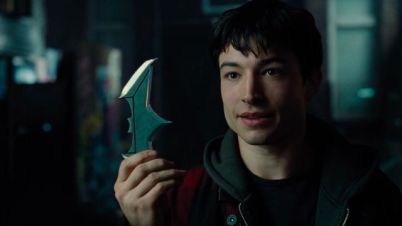 With Superman and Batman going through so many film-to-film changes in this series, Flash and Cyborg weirdly stand out by the end of Jutice League as two fo the more fleshed-out characters.

Justice League doesn’t even seem to understand its own metastory — while most of the runtime is spent on the team coming together, the first chance they get, they try to replace themselves with Superman. This becomes very literal in the climactic battle, in which Superman outruns Flash escorting civilians out of harm’s way and breaks Steppenwolf’s guard like it isn’t even there after Wonder Woman and Aquaman (Jason Momoa) spend 20 minutes fighting him to a tenuous stalemate. The lesson here is that there will be some problems you can’t overcome on your own, and when you pull together as a team to overcome them, you’ll still fail, and someone more powerful than all of you combined by an order of magnitude will literally come back from the dead to save the day.

Well, he is traditionally a Jesus metaphor.

Warner Bros. ability to hear and react to criticism without really comprehending it is truly astonishing. Man of Steel drew fire for its wanton destruction and mass death, despite saving as many people as possible being Superman’s primary drive as a character. So in Dawn of Justice, they made sure to have all the wanton destruction take place on an uninhabited island and had Superman wonder for most of the film whether or not even gives a shit about human life.

Batman is a polylingual genius in multiple fields of science, master of dozens of martial arts, a ruthless vigilante who will do anything but kill who has a plan in place to put every member of the Justice League down if needs be and the ability to carry them all out. Dawn of Justice faced scorn for turning him into a mass murderer, so Justice League tones down his violence, but does even worse by turning him into a drooling imbecile, constantly at the mercy of the gods whose company he’s lucky to share.

Dawn of Justice’s 151-minute runtime felt bloated because almost nothing happened in those 151 minutes, so, in probably the most damaging single decision that went into the film, embattled Warner Bros. CEO Kevin Tsujihara mandated that Justice League be less than two hours with no concern for how much ground those two hours had to cover.

Man of Steel and Dawn of Justice director Zack Snyder famously stepped away from the project in May to properly grieve his daughter’s suicide, providing Warner Bros. a tragic opportunity to bring in Joss Whedon to finish a project they probably wanted to take in a different direction anyway. Though Snyder is still listed as director on Internet material, the final credits noticeably don’t name a director, and that fits. I wouldn’t want to put my name on this either.