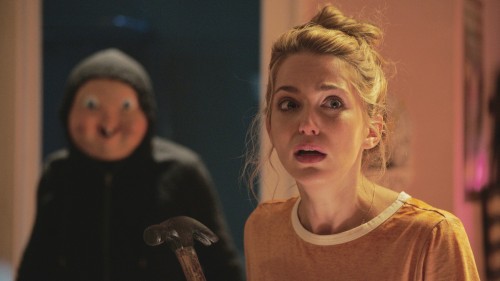 5/10 For the first Oct. 13 that falls on a Friday in 11 years, Universal and Blumhouse Studios bring us Happy Death Day, a mashup of Groundhog Day and a standard slasher film. It’s expected to take no. 1 at the box office this weekend.

I can’t really think of anything else still in theaters this weekend that I’d rather see.

In Happy Death Day, Tree Gelbman (Jessica Rothe) awakens in the dorm room of fellow college student Carter Davis (Israel Broussard) with a nasty hangover. Gelbman drifts through her birthday like any other, blowing off roommates, sleeping with the biochem teacher and trying to fit in with her awful sorority sisters. That night, she’s murdered by a masked figure. She awakens and re-lives the same day, finding herself on the wrong end of a kitchen knife again and again no matter where she goes or what she does. After her initial shock wears off, Gelbman begins working to eliminate suspects and figure out who is killing her.

Happy Death Day is fine. It’s, you know. It’s a movie. Nothing to write home about, but it’s not like any holdovers are really special.

It doesn’t have any modern movie stars in it, or stars of yesteryear. Director Christopher B. Langdon has never done anything of note, and cinematographer Toby Oliver is not Roger Deakins. They create some decent shots, but the plot undermines them — it’s tough to make locations special when you necessarily have to revisit them several times each.

The movie runs its course without becoming annoying, which is its own feat given the repetition inherent in the plot and focus on such a horrible young woman in Gelbman. It’s surprisingly linear — unlike Groundhog Day, which could have taken as long as 40 years from the protagonist’s perspective, Happy Death Day takes place over just a couple of weeks, and we see almost every death. It’s certainly not the strongest story — there’s a heavy focus on Gelbman’s first few and last few days in the time loop, with the rest expressed as a big montage in the middle. Most of her character growth happens over the course of this montage, so her overcoming her internal challenges at the end of the film kind of comes out of nowhere.

Blumhouse knows how to make crowd pleasers. Happy Death Day will do a great job of bringing in young female viewers, which is a key demographic. It plays a little fast and loose with its own internal logic, but it’s aiming a little low in terms of target audience intellect anyway.

It’s expected to take the weekend with — $18 million? That’s it? That’s all they think it’s going to take to beat Blade Runner 2049 in its second weekend?

I don’t understand this. Go see Blade Runner! Go see Blade Runner! If you already saw it, create your own Groundhog Day loop and go see it again! Don’t tell me it’s too long, it’s 15 minutes fewer than the shortest Lord of the Rings movie, and you people ate those right up! If it had hobbits in it, a few years from now you’d be shelling out for the 40-minutes longer special edition with a grin on your face!

This entry was posted in Entropy and tagged #lord of the rings, bitchy, Blade Runner 2049, Blumhouse Studios, Go see Blade Runner, Groundhog Day, Happy Death Day, It's fine, What is wrong with you. Bookmark the permalink.