Bridge of Spies another Spielberg snoozefest

This shot, after the exchange takes place, goes on for about 10 of Bridge of Spies’ 141 minutes as the orchestra swells and pats Donovan on the back for the great job he did. Photos courtesy Walt Disney Motion Picture Studios.

Look, Steven Spielberg’s filmography is beyond reproach. The guy essentially invented blockbusters with Jaws and Close Encounters of the Third Kind two years later, and that hasn’t worked out so well, but it’s to his credit for developing the business method. But it’s time to realize that he can, and often does, do wrong.

The most frustrating thing about this is it didn’t have to be as bad as it is. The first scene of this movie, and several individual sequences after, are staggeringly good. The dialogue-free chase and initial capture of Abel is an electrifying visual story of fear and tension, marked with long, difficult shots and fantastic editing. With this scene straight off the bat, scenes of Donovan’s son, Roger (Noah Schnapp) learning about the bomb in school and filling the bathtub with water in preparation for it and of Germans being shot trying to get over the Berlin Wall, Bridge of Spies sucks you in to the intense paranoia of the time period. This isn’t just a period piece because they have period-accurate coats — you feel what they felt living in the height of the Cold War. It really shows off how great this movie could have been, and how fantastic a visual director Spielberg can still be when he tries.

Bridge of Spies is an exercise in self-loathing, a completely exhausting movie in the worst possible way, one that makes its 141 minute run time seem like an eon. Despite the excellence of those minor scenes, the movie is filled to the brim with sweeping music, self-congratulatory victory shots, poorly written side conflicts and poetic waxing about the American way of life. Bridge of Spies spends more time discussing what its conflicts mean than it does showing the conflicts themselves, to the point that I can’t even pinpoint what the central conflict is in this movie. It feels less like a complete story and more like a soap opera, with a bunch of different characters who all want different things that don’t necessarily have anything to do with each other, but who all have to make at least a cameo in every episode to keep the long-term audience interested.

Despite generally strong concepts for visuals, there’s a lot of digital correction to the point that it really stands out in stills, like this shot where the crowd is obviously not really there…

There’s Powers, the captured American pilot who wants to not spill military secrets while imprisoned in Russia, with whom viewers inexplicably have to spend 10-15 minutes learning the ins and outs of flying his spy plane, 10 minutes watching him bungle it all up and crash and another five minutes watching him be tortured. He could just as easily have not been in the movie and only referred to in the abstract. There’s Frederic Pryor (Will Rogers), a student who gets himself caught in East Germany that Donovan sticks his neck out for, whose capture is dramatized in great detail. He, too, may or may not have really needed to be in the movie directly. There’s the East German negotiator, Wolfgang Vogel (Sebastian Koch) who insists that East Germany is a real country and can handle things and is smart, who jeopardizes the exchange for Powers by being a child. There’s Donovan’s wife, Mary (Amy Ryan), who doesn’t want Donovan to take the case because the family will be looked down on. There’s Abel, who doesn’t do much of anything.

Then there’s Donovan, whose motivations seem to change from scene to scene. He talks a lot about the Constitution and its importance to his defense of Abel, but seems to do a dramatic heel-face-turn offscreen with regard to how he feels about Abel personally, going above and beyond in his defense. At the same time, he also seems to care what people think of him. In the second act, he has clear motivation — a directive from the CIA to rescue Powers, but he cares a lot about what will happen to Abel once he’s returned to Russian custody, as well as Pryor’s plight. Donovan manages to walk an awful tightrope of going on and on about his convictions while at the same time never really explaining them, both wasting time with the explanation and also leaving the same questions that a lack of explanation would. It doesn’t help that Hanks is more focused on delivering proper diction than any form of human emotion. 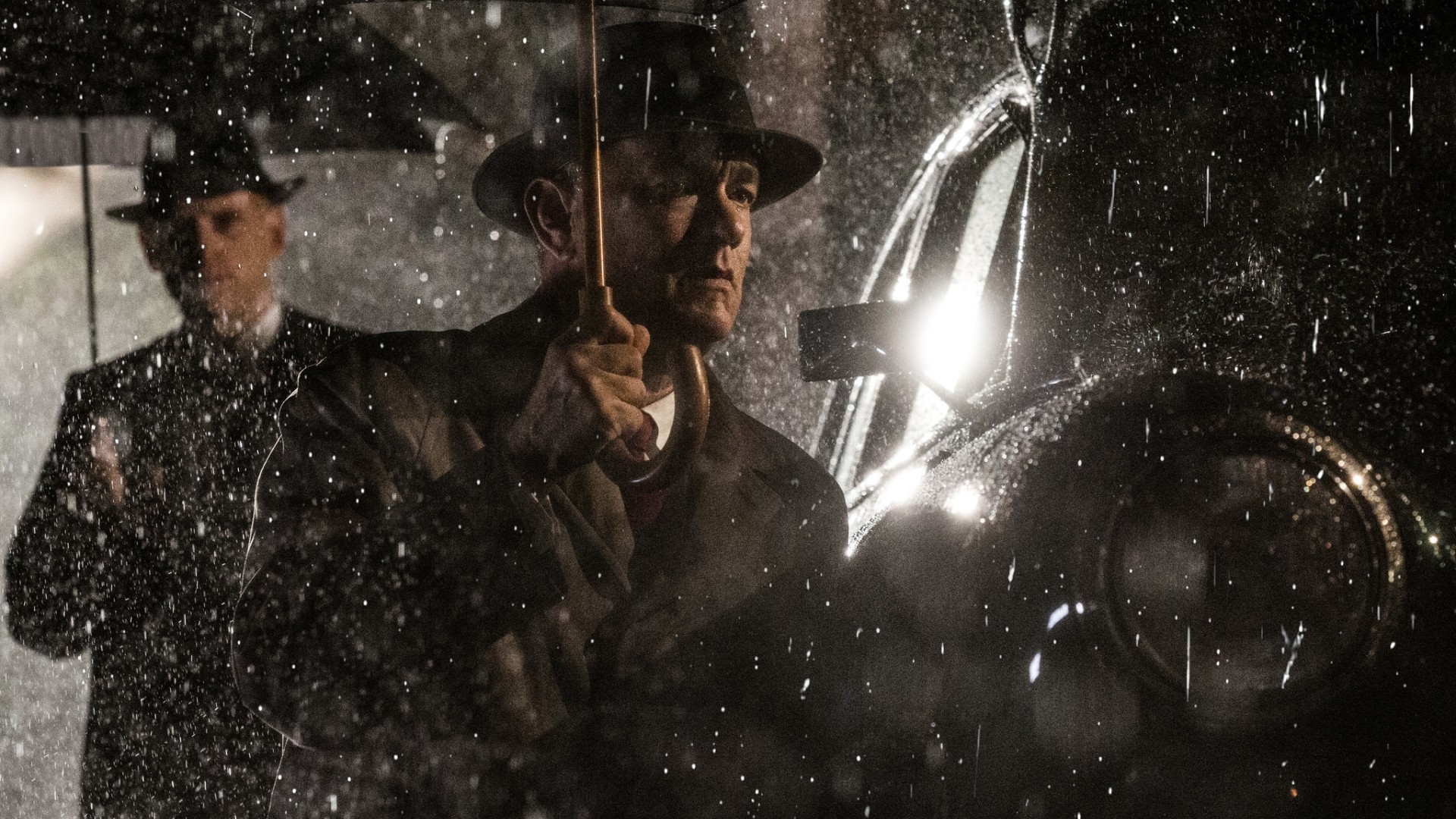 …or this shot, where the lighting has been corrected to the point that it has become decidedly incorrect.

Bridge of Spies feels a lot like Spielberg’s last film, Lincoln, and it raises some glaring issues with him as a director. His early career was so successful that many of his hallmarks are now commonplace tools for most directors, leaving it difficult to tell the difference between Spielberg and the myriad Spielberg knockoffs, particularly around Oscar season when they’re coming out of the woodwork. These hallmarks — family friendliness to the point that it can take away from the story, grand sweeping orchestral swells and extreme optimism, to name a few — are of course not necessarily bad things. Jurassic Park is an example of a movie that puts these tools to absolutely perfect use, and the movie I always go back to as a comparison for the more generic movies that try and evoke it by using similar tools inappropriately. Like Bridge of Spies, for instance.

So even though it feels like there’s been an oversaturation of Spielberg movies recently, he’s only directed five in the past 10 years, and it’s not an impressive list. There was Indiana Jones and the Kingdom of the Crystal Skull, which packed an entire Prequel Trilogy’s worth of disappointment into two hours of will-breaking misery; The Adventures of Tintin and War Horse, neither of which I saw because one is for little kids and the other is about a horse; Lincoln, which I literally fell asleep at; and now this. But these movies get unreal reviews, and it feels like that’s primarily because of the name on the poster. Hanks gets similar treatment, despite his iconic works also being more than 20 years old.

Jurassic Park came out four days after my first birthday. Philadelphia came out that December and Forest Gump the next June, and winning an Oscar for playing a gay person that dies or a mentally disabled person is such a cliched at this point that it barely counts as a win. It’s long past time we stopped giving both of these filmmakers a free pass.

Leopold Knopp is a formerly professional film critic, licensed massage therapist and journalism student at the University of North Texas. It’s hard not to sound thirsty when you’re on fire. I’ve had a change of heart about reader input. It is now welcomed and encouraged. Like Reel Entropy on Facebook, follow it on Twitter @reelentropy, and shoot questions to reelentropy@gmail.com.

3 Responses to Bridge of Spies another Spielberg snoozefest