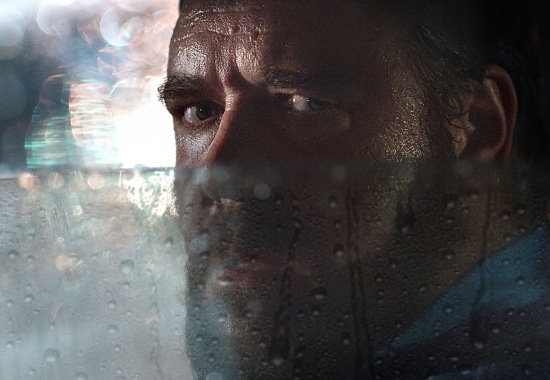 In New Orleans, where only two bridges service the mighty river that bisects the metro area, Rachel Hunter (Caren Pistorius) honks her horn at a grey Super Duty stopped in front of a green light. Unfortunately, behind the wheel of that truck is Tom Cooper (Russell Crowe), unemployed, recently divorced and is shown taking several medications for a presumed mood disorder, looking for someone to take it all out on. Cooper follows Hunter to a gas station, steals her phone and leaves his own, then starts taking her appointments and murdering the people she was going to see. He calls her constantly with threats and demands and uses the tracking feature on his own phone to keep tabs on her.

Solstice Studios was determined that Unhinged be the first wide release since theaters locked down in March, aggressively posting up on the July 1 date in May and then shifting back three different times to stay relatively close to larger releases like Tenet and Mulan. It’s a brash strategy for a distributor on its first feature, but getting to screens first doesn’t increase the film’s marketing budget or overall appeal. It’ll be interesting to see how it ends up doing financially, but there’s probably not much we can learn from it.

It’s nice that this is the first one through the wall, though. Dangerous driving has a proud history as one of the most fundamentally cinematic concepts for a scene. Film is heightened reality, and that’s exactly what dangerous driving is – driving is an everyday reality in the U.S., and it’s heightened to being dangerous. It lets viewers safely indulge in some of the most common impulses in our culture, it’s cheap to film, it can be great at times and even when it isn’t, a good car crash is always satisfying.

This movie is extremely underwritten. Almost every scene of dialogue is stretched to twice as long as it needs to be, with pauses to give every line and shot dramatic heft that they often don’t deserve, and peripheral details that don’t matter about what a bad day Hunter is having and what a bad life Cooper is having are fleshed out at length. Once you realize what’s going on, which you should very quickly, even the pulpy car violence this movie should be indulgent toward becomes exhausting when every stretch without a stunt gets multiple angles of coverage, every affected bystander gets their own cutaway and every crash gets multiple shots to play out.

The end result is a movie that feels like it’s taking forever at just 93 minutes. At that length, I can only assume it’s stretched out this way because the script was too thin or there were scenes that went unshot. You can only spend so many scenes wondering if this wouldn’t have been cut if they’d had more material before you have to realize you’re simply watching a bad movie.

Unhinged’s stealth Idiot Plot underscores and contributes to this problem. It feels tacky to judge how Hunter handles her terrible situation, but it’s too obvious that she could completely shut Cooper down by just not taking his calls. Cooper loves talking, and he takes time in every scene to reemphasize several of his points – this repetition is another element that adds to the feeling of a padded runtime.

His points are all moronic, of course. He’s dedicated to telling Hunter that all of this is her fault, always taking time to verbalize specifically, “You just killed so-and-so” and “You just set such-and-such on fire.” He lost his pension after a work injury and was subsequently divorced, and he will go out of his way to tell you about it at absolutely every opportunity – again, another element of repetition in almost every scene that makes the movie feel like it didn’t know how else to hit 90 minutes. His constantly pausing his violent power trip to solicit pity also solidifies how pathetic he really is — pity is what Cooper really wants, and he is consciously aware of this.

Cooper isn’t special. He’s a middle-aged American man deeply up his own ego trying to get off on a power trip. The only thing Hunter needs to do, really the only thing she can do, is deny him interaction, or failing that, challenge him on the idea that his violence is somehow her responsibility. Neither she nor anyone in the movie explicitly contradicts Cooper on this, and it seems like the movie itself actually agrees with him. There’s even a joke in the denouement where Hunter decides not to honk at another driver, as if the ordeal she’s just been through is something she can expect every time she honks her horn, as if it really is her fault.

Unhinged positions violence as an inherent elemental force lurking within mankind, a lingering menace that can never be extinguished, but fails to recognize the culpability of violent individuals and even takes several moments to excuse Cooper and allow him to excuse himself. Within this narrative, he isn’t responsible, he can’t help it, anyone who’s been fired and divorced and honked at would behave the same way. This is a consistent throughline in screenwriter Carl Ellsworth’s work – most of his movies feature extraordinarily violent men with thin justifications or other elements of conservative paranoia, such as his most recent movie, the 2012 Red Dawn remake. 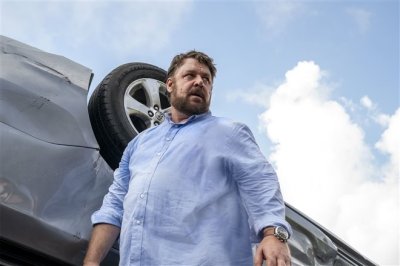 Crowe is spectacular. He expertly toes a fine line, carefully playing not the elemental urge to violence within man, but a pathetic loser who thinks he is. His performance works in concert with the rest of the movie to allow Unhinged to very effectively have that issue both ways. It’s also a wonderfully self-aware performance from an actor who has been famous for violent outbursts in the past.

Unhinged is a remarkably conservative work. This is apparent in several ways, from its small-scale premise, its casting of Crowe, its positioning of violence as immutable instead of a matter of individual responsibility, its consistent anti-technological bent and pro-police stance. It’s so conservative that it feels strange when it declines an indulgent pro-gun politic – the only gun fired in the movie belongs to a cop. There’s no “good guy with a gun” moment when Cooper murders Hunter’s lawyer in the middle of a café, and there’s no “grandma’s secret arsenal” moment when Hunter takes refuge at her mother’s house in the climax.

There are, of course, peculiar ironies to watching Unhinged in 2020. There’s a scene where Hunter’s mother can’t unmute herself on Zoom – this is actually the only time her mother appears onscreen – and the pro-police stance, which isn’t outlandish as much as it is ignorant of the facts about American cops we’re acutely aware of right now. Throughout the movie, Hunter is calling cops to every possible location Cooper might be heading to, but in the current climate, I’d be worried about a jumpy cop getting there and shooting me by mistake, particularly in the climax at her mother’s house.

It’s also extremely ironic watching this movie about a character losing his mind over someone not adhering to his personal standard of courtesy in the midst of this pandemic when we’re being inundated with video after video of the exact opposite – people losing their minds over being asked to adhere to a public and very high-stakes standard of courtesy. I guess it’s just one of those things we never would have suspected that this apocalypse has revealed to be true.