“A city of light. I have built it already in my imagination, and it is perfect.” Images courtesy 101 Studios.

10/10 The Current War was the last film Harvey Weinstein worked on, and consequently took a bit of a serpentine path to theaters. Weinstein, who is listed as a producer but not credited, had reportedly re-edited the movie despite producer Martin Scorsese having final cut privileges, and that’s the cut that was screened at the 2017 Toronto Film Festival — a month before the Weinstein scandal took off that October. Director Alfonso Gomez-Rejon got Scorsese to pull the film outright, did some reshoots and shaved 10 minutes off the cut, and what’s finally been released two years later is called “The Director’s Cut” to distinguish it for the small handful of people who know that story.

It’s a long and winding journey, unlikely to yield anything that makes it to the big screen, let alone this dazzling lightning bolt of cinema.

The Current War covers the several years-long trade war over installing electrical infrastructure across the U.S., starting in 1880 and culminating in the 1893 Chicago World’s Fair. In one corner, tinker Thomas Edison (Benedict Cumberbatch) wields direct current, which provides a high uniform voltage, but can only travel a few miles before petering off, requiring expensive substations to be built all across major cities. Opposite, industrialist George Westinghouse (Michael Shannon) and his team develop alternating current, which averages at a much lower voltage, but can be transferred for hundreds of miles along copper wires suspended in the sky without losing any of its potency.

As Westinghouse was a better businessman selling a better and astronomically cheaper product, the titular current war wasn’t really much of a fight. The main conflict is through the press, as Edison tries to leverage his fame and influential friends into retaining control of the industry, most notably by painting alternating current as potentially lethal. In this way, Edison, who refused to use his talents to create things that kill people, spurred the invention of the electric chair.

“My boys and I caught in a jar what before now has only flashed across the night sky.”

Everything about The Current War is perfect. It is a systemically perfect film. The lighting is perfect, the shot choices are perfect and the editing, oh God, the editing.

The film’s strongest element is its brilliant visualization of the emotions of the story. Early in the film, Edison sets off his rivalry with Westinghouse by standing him up for a dinner at his mansion in Pittsburgh, a decision marked by Edison instructing his assistant, Samuel Insull (Tom Holland), to have their train skip the entire stop. I doubt Edison owned that train or otherwise had the authority to do that, but the resulting shot of Westinghouse and his wife, Marguerite Erskine Walker (Katherine Waterston), dressed to the nines, watching the train they came for whisk by without even slowing down, is by far the best visualization of the emotions involved I’ve ever seen. What could have been a footnote to the plot is made a grotesque insult, callous and careless and dismissive, the facts of exactly how much the Westinghouses cared about the evening and exactly how little the Edisons did staring right at each other. There’s a bevy of other moments like this of spectacular visualization of emotion, from the way a kiss can stop time to the extended awkwardness around Mary Stillwell Edison’s (Tuppence Middleton) deteriorating brain condition.

Gomez-Rejon and cinematographer Chung Chung-hoon use standard cinematic lighting techniques to emphasize the miracle of electricity and make Edison’s lightbulbs and the possibilities they present seem just as radical as they would in the 1890s. One of the opening scenes is Edison making prospective investors trek in the dark to his workshop in Menlo Park where he’s set up illuminations for dramatic effect. Much of the film is set at night, mired in the darkness of a world before lightbulbs, with underlighting — both in terms of positionally lighting things from underneath and quantifiably using less lighting than they need to — used to impress how dramatic a sea change this technology represents. Even as you watch it with a supercomputer in your pocket, The Current War makes its late-19th century technology feel like a revolution.

But it is the editing, either aptly or ironically depending on how you look at it, that makes The Current War so puckish and audacious. This movie’s got balls.

“There’s never going to be anything named ‘Tesla’ ever again.”

In terms of overall structure, it’s got a distinct Scorcese feel to it, particularly reminiscent of The Departed with rapid editing and massive timeskips that leave the viewer with little grounding in the timeline. Edison’s and Westinghouse’s constant refusal to directly engage each other, which also echos Scorsese’s 2006 masterwork, both extends and intensifies their conflict.

The film noticeably brushes past establishing that conflict, instead establishing its characters and sort of herding them together. There’s such an intense and immediate focus on Edison that most of the film comes off as primarily his story, which makes sense – Edison is still much more famous than Nikola Tesla (Nicholas Hoult) or Westinghouse, and when this was made, Cumberbatch was a much bigger star and relatively fresh off playing another tech icon, Alan Turing, in 2014’s dreadful Imitation Game, which is itself a prototypical example of the kind of dreary Oscarbate Weinstein probably wanted to turn this into. The tragedies that marked Edison’s life were probably much bigger parts of the Weinstein cut.

But The Current War is very much not what you’d expect from an Oscarbate movie. There’s very few of the big, sweeping acting moments that drive actor-heavy Academy Awards voting and little romanticism of the momentous events depicted.

And then, seemingly out of the blue, they come. After most lines being kept to a single sentence or two, Cumberbatch gets a full two minutes to describe the realization that he had found the correct material for his lightbulbs, breaking the show-don’t-tell rule for perhaps the first time in the movie to turn a 13-hour marathon that couldn’t possibly have been filmed into a breathtaking tale of suspense and elation. When J.P. Morgan (Matthew Macfadyen) takes Edison’s company away and merges it into General Electric, which he’s dramatically pressured into name-dropping, it’s not a self-important nod to the audience, it’s a tragic, character-driven scene demonstrating the ego, obsessiveness and self-destructive flourish that brought Edison to this point.

The editing is also what creates its most outrageous moment-to-moment highlights, which revolve around the electric chair. There’s a scene when Westinghouse is discussing the idea of being associated with a killing machine intercut with a scene from his time in the Civil War decades earlier, in which a Confederate soldier ambushes him and he praises the technological advances of the revolver being pointed at him. The World’s Fair and the first execution by electrocution, events three years apart in real life, are intercut in a dazzling three-way splitscreen that shows the marvelous little bulbs literally push the idea of danger off the screen. 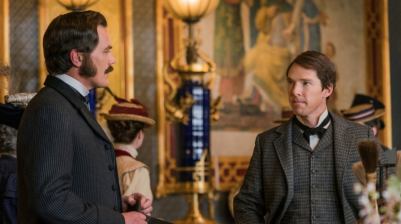 “Soon, all of these people will have electric light, and none of them will even remember it happened.”

Set more than a century ago, The Current War remains sharply relevant to 2019. In this world where new iPads come out every year and countries attack each other through software, in which an entire generation has been defined by the unique ennui of watching childhood technology grow old before we do, reel it back 100 years and watch the overwhelming march of technology change the world just as radically and just as quickly when domestic electricity was still new. Shut down your worries about the world of 2019 and the specific knowledge of how industry contributed to them and revel in the pure, no-holds-barred, utterly American savagery between these industrialists.

It’s the story of the wonder and hope at the turn of the 20th century, when the Wizard of Menlo Park cast his spells and new possibilities beyond the wildest imaginations pushed tinkers into the realm of madmen and their technology into the realm of magic in a desperate, never-ending surge of one-upmanship that echoes through history.

It’s the story of one man standing another up for dinner.