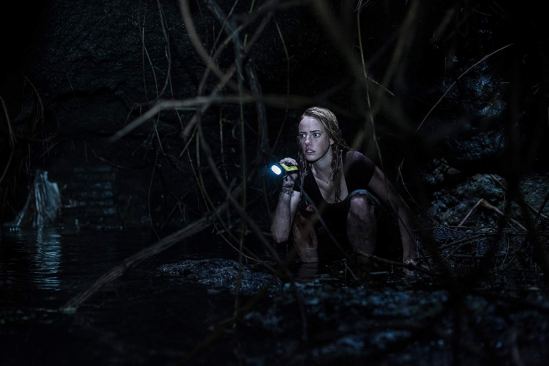 Scodelario’s performance also leaves something to be desired, though I’m much more inclined to blame editor Elliot Greenberg based on some of the ways it comes out. Images courtesy Paramount Pictures.

6/10 Despite a ton of talent behind and in front of the camera, Crawl ends up not being worthy of its wonderful story.

As a category five hurricane prepares to march straight up the middle of Florida, University of Florida swim team member Haley Keller (Kaya Scodelario) drives two hours south, toward the storm, to make sure her estranged father Dave (Barry Pepper) has actually evacuated. She finds him in the crawlspace of her childhood home, passed out from blood loss after being attacked by an alligator that had nested in the drain pipes. As the storm hits and the neighborhood begins to flood, the Kellers must fight their way up the house, which is quickly filling with both water and more alligators, in hope of finding rescue on the roof.

Crawl was lined up to be a much better movie than it is. Scodelario is a frequent star of ill-advised franchise movies like Pirates of the Caribbean: Dead Men Tell no Tales and the Maze Runner series, and she usually stands out as a bright spot in poor films. Director/producer Alexandre Aja has been around for a while, and he’s got a history with the kind of nasty, no-holds-barred horror that Crawl calls for. The name the movie was sold on was that of producer Sam Raimi, who is obviously a well-regarded figure in camp horror.

This talent would be bringing to life a brilliant script by Michael and Shawn Rasmussen. Their resumes aren’t nearly as long – they wrote John Carpenter’s The Ward in 2010, but Crawl is going to be their first major release – but their work here speaks for itself. Crawl incorporates many anxieties and phenomena unique to 2019 Florida, and the U.S. in general, but in in addition to the macro story, family drama is laid on thick between Haley and Dave Keller. You’ve got Haley’ growing inferiority complex in her swimming as she’s started to face tougher competition, which is wrapped up in her relationship with her father because he coached her when she was young – she actually blames herself for her parents’ divorce because of the amount of attention Dave gave her and not his wife. All of this is coming out as she returns to the house she was raised in for the first time, a house Dave was supposed to be selling, yet here he is still repairing it. It’s a wonderful mess of symbolism and emotion and alligators biting people in half, the type of story that’s really tough to mess up.

And Aja and company didn’t mess it up, not really. They just didn’t wring the best out of it. 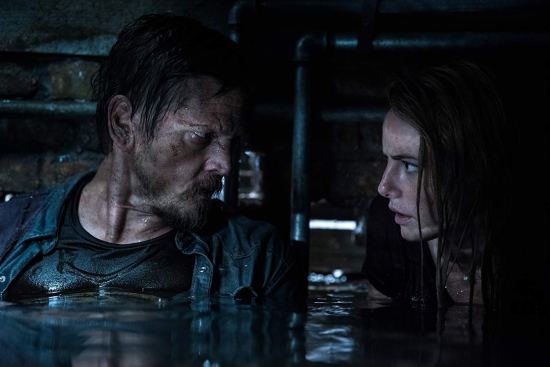 A great thing about the family drama and the way the story is designed is it precludes any dumb self-sacrifice plot point. Dave Keller is severely injured when he’s introduced, but him throwing his life away would invalidate his daughters emotional and narrative goals, and he never tries to.

On the production side, everything is just wrong, even from the opening scenes. As Haley Keller drives into this incredible storm, the sky is a mild mix of greys instead of the type of apocalyptic clouds that would herald a real storm.

The sound design, which is critical to this movie in several ways, doesn’t seem well thought out. Haley Keller spends most of the movie playing cat-and-mouse with these alligators, a game we’re told is mostly sound-based, and there are also a surprising number of bystanders to whom the Kellers call for help. Who can hear what and when is massively important, but Crawl doesn’t do nearly enough to make those perspectives clear.

The lighting is off. It looks like most of the work to make sure everything was visible was done by fiddling with it in post-production, raising everything into this bland, grey-ish color that seems to be lit from all around. The crawlspace much of the movie takes place in should be a spectacular space for photography, with intense light coming from limited sources, but there doesn’t seem to have been any attempt to use the advantages of the space.

The biggest problem, though, is the alligators. They are ugly as sin, and they’re not very good at being alligators. Haley Keller – and no one else, funnily enough – is constantly dodging out of bites, out-running and out-swimming these things, and Dave Keller frequently uses their supposed sensory shortcomings to out-smart them. 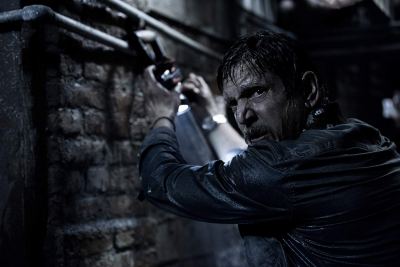 Crawl isn’t just colorless in the sense that this crawlspace isn’t feng shui’d. If that were the case, there’d still be vibrancy of earthy colors against the alligator’s green and the Kellers’ costumes. Instead, this movie is colorless in the way of a movie that had all its colors sucked out in post-production.

This movie prompted me to do a lot of research into alligator’s movement speed and sensory capacity – they swim at about 20 mph and ESPN estimates Michael Phelps swims at about 6 mph, so the idea of Keller out-swimming them is silly – but what the rules of this fight would be in real life don’t really matter to Crawl because those rules keep changing within the movie. In one sequence, Dave tells Haley something to the effect of, “they can see in the dark, but they can’t hear you,” and in another, he bangs on metal pipes to scramble their brains because suddenly their hearing is sensitive enough for that. This is a cat-and-mouse movie. Clearly established physical capabilities really matter here.

Additionally, while Crawl is a movie and the alligators are metaphors and creative license is definitely allowed, it is also a grimy, muddy affair, and more research and realism with the subject matter would have been a better direction to go.

That’s the other major letdown of Crawl, and this probably has to do with the lighting as much as anything – the gore is nowhere near where it should be. Multiple looters and rescue workers get ripped apart by alligators in a movie produced by the guy famous for the Evil Dead series, but all we get to see of it is some red-tinted water, and even that is only in some cases. Crawl is a B-movie, if not by intent then by budget, subject matter and place in the release schedule, and it needs to bring the hard-R B-movie goods if it’s going to compete, either with bigger releases for ticket revenue or with other B-movies for a spot in history. It does not.

This is especially a problem for a movie that’s sharing theaters with Midsommar, which is one of the most spectacularly gruesome shows in recent years.

Crawl really is a perfectly enjoyable movie, but it’s difficult to recommend because it falls so far short of what it ought to be. I’d say this is only a solid choice for hardcore horror fans, but one of the key problems is the horror is actually pretty softcore, so I don’t know what to tell you.

This entry was posted in Entropy and tagged #b movie, #the maze runner, Alexandre Aja, Crawl, Kaya Scodelario, Michael and Shawn Rasmussen, Midsommar, Pirates of the Caribbean: Dead Men Tell No Tales, Sam Raimi, The Evil Dead, The Ward. Bookmark the permalink.