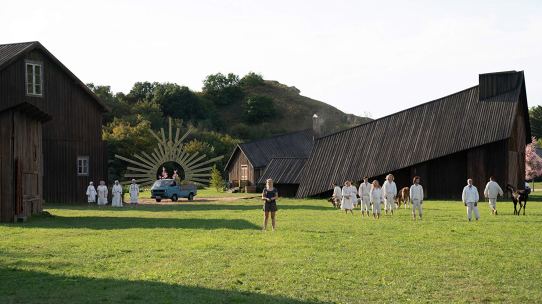 The strange architecture of Hårga, particularly the bright yellow temple too sacred for most characters to enter, subtly haunts from the background. Images courtesy A24.

9/10 Midsommar is such a strong example of film craft, is so viscerally affecting and executes its ideas with such commitment that it can only be seen as a masterpiece, but that isn’t to say it’s perfect.

Near the summer solstice, anthropology graduate students Christian Hughes (Jack Reynor), Josh (William Jackson Harper) and Mark (Will Poulter) join their Swedish classmate Pelle (Vilhelm Blomgren) on a trip to his home in Hårga, Sweden, to observe the remote commune’s midsummer festival. At the last minute, Hughes’ girlfriend Dani Ardor (Florence Pugh) joins the trip. Hughes has wanted to break up with Ardor for several months but was delayed when her sister killed their parents and herself in the winter, an incident which has left Ardor suffering multiple panic attacks daily. At the festival, the group is plied with a wide variety of psychedelics and then plunged into a Wicker Man/Cannibal Holocaust nightmare that’s all wrapped up in Ardor’s and Hughes’ relationship strife.

Midsommar is an absolute masterclass in putting viewers into the protagonists’ frame of mind, which is paramount to telling the story of what essentially amounts to a bad trip. The film is composed almost entirely of achingly long shots that involve a lot of hard-to-notice movement. The camera mingles with its subjects, almost as if to turn the viewer into his or her own character who is experiencing Midsommar in the first person in real time, trapped with the main cast under the constant, oppressive, just barely oversaturated glare of the midnight sun.

The seemingly eternal shots in a seemingly eternal movie – Midsommar clocks in at a beefy 147 minutes – eliminate all sense of time for the viewer, which is also central to the protagonists’ experience. Based on what’s explicit about the geography, Hårga is four hours north of Stockholm in Hälsingland, which would put it well beneath the Arctic Circle. Characters state the sun does dip beneath the horizon for a few hours every night, but we never see it happen. The cultists keep track of the days easily, but from the character and viewer perspective, the sun is high in the sky both when they go to sleep and when they wake. They’re only spending a few days at the commune, but that’s little comfort when time doesn’t seem to pass at all.

Will Poulter is elevated to “and” status now, which seems to synergize with his lack of screentime. Many of his punchlines are delivered offscreen, and almost seem as if they were recorded to be interchangeable and inserted in post-production.

The otherwise cool camerawork falls in with characters’ altered states of consciousness, becoming erratic to cover Pugh’s panic attacks and focusing on the crowding plantlife warping, seemingly breathing, when covering the perspective of a tripping character. As the film moves along, these variations of camera movement become less tied to the states they were established for, and the viewer drifts away from the protagonists’ explicit point of view. Pugh is hyperventilating, but the camera is calm and still – is the situation actually under control? Whose control? We’re no longer seeing through the eyes of an explicitly tripping character, but the flowers are still breathing – maybe they’re actually doing that?

Daylight plays a hefty role in Midsommar on multiple different levels. It’s often been referred to as a “daylight nightmare” and can be read as a conscious, feature-length exercise in the Daylight Horror trope, but it’s more than just the contrast against most horror movies being physically darker, it’s a contrast against jump-scare horror as a genre. Points of horror aren’t just well-lit when they arrive, they’re visible from several frames away. The camera lingers delightfully on some of the most grotesque displays in recent years. Cultists, who surround and overwhelmingly outnumber the other characters, are all perfectly aware of what they’re doing and seem to have been looking forward to it for some time.

While Midsommar is clearly a horror movie and clearly top-tier, there’s a remarkable number of laughs mixed in with the chills, even up to the film’s climax depending on your level of cynicism. It almost feels like a B movie in that way, a feeling that might have even consumed the film if the horror weren’t so overt and ever-present.

Ruben (Levente Puczkó-Smith), Hårga’s inbred “seer,” is another grotesque aspect that is minimized in the final cut. He features prominently in marketing but is mostly seen at a distance and never participates in any of the violence.

It’s public knowledge that writer/director Ari Aster made Midsommar as a breakup movie, reflecting one he was going through during writing. That’s such a personal thing that the only one who can really decide if he was successful is Aster himself, and between Midsommar and his previous film, Hereditary, he’s proven to be a master of psychological filmmaking and fully capable of weaving anything he wants into a movie, but Midsommar reads weirdly with Hughes and not the cultists, as the antagonist – especially since he’s a victim himself, however big of a pill he is. Ardor and Hughes clearly do not belong together from the film’s outset, so seeing them driven apart by an apparently external force that’s also doing murder and witchcraft is strange.

As excruciatingly gory as Midsommar is, it could go much further. Plenty of victims are disappeared instead of being murdered onscreen.

One more thing – mild spoilers below

In the film’s climax, Hughes is drugged and raped by the cultists. That word isn’t getting used to describe the situation, and that’s a problem. Most of the descriptions I’ve seen of this sequence describe Hughes’ control over the situation as wonky, while also noting that he was otherwise attracted to Maja (Isabelle Grill) and probably would have slept with her if given a choice.  But he wasn’t given a choice.

For the film’s part, Midsommar navigates the issue in a way that borders on blaming Hughes and certainly punishes him. It reads a lot like the sex scene in Blade Runner, where consent seems like it just wasn’t thought about.

The U.S. as a whole has proven itself consistently confused about sexual consent, and this Midsommar scene runs afoul of some particularly disturbing elements of that. The scene obviously brushes against the persistent misconception that men cannot be raped, but the writing about this reflects the reality that most people simply do not understand what constitutes rape. Recent research finds this disconnect, bizarrely, extends even to rapists themselves – many rapists who are studied openly admit to sexually penetrating someone without their consent, but at the same time deny that they “sexually assaulted” or “raped” anyone.

There’s a deep irresponsibility at play here that’s really much more of a societal issue than an issue with the film itself. Still, it’s clear the way this scene is being written about that more needed to be done to draw the scene’s boundaries.