‘Parabellum’ step down for story, step up for franchise

8/10 John Wick: Chapter 3 – Parabellum is absolutely everything you’ve ever wanted out of an action movie. It is a pants-on-head insane celebration of stunts and choreography, an asylum of guns, knives, gothic noir landscapes, hounds of hell, classical literature, blood oaths, blood sacrifices, shattered glass, crimes, punishments and neon lights. It is a sendup of traditional filmmaking in which as much as possible is shot in-camera, a glorious carnival of everything that can be done with gleefully dismissive attitude toward the question of what should be done.

And that’s the first half hour of Parabellum. The rest is, I mean it’s not bad, it’s just different.

John Wick: Chapter 3 picks up right where Chapter 2 left off. Wick (Keanu Reeves) has a $14 million bounty on his head, and what’s worse, he’s killed a man on the grounds of the Continental Hotel, a mortal sin that means his life is forfeit regardless of the price, and the hotel’s sanctuary doors are closed to him. Wick calls in every favor he’s ever collected to get out of New York City and seek out the one man who can absolve his crime.

Meanwhile in the city, the High Table sends an adjudicator (Asia Kate Dillon) to collect blood from anyone and everyone who helped Wick.

We’ve talked before about the shaky-cam trend in post-Bourne action movies of the ‘00s, and John Wick leads a pack of high-quality films in the opposite direction – partially by being the name most identified with the trend, but mostly because franchise director Chad Stahelski continues to be openly critical of action movies that use shaky cam and rapid edits to hide the fact that they didn’t do the stunts. It’s an extremely loose group – the Raid movies from Indonesia, the later Mission: Impossible installments, Mad Max: Fury Road and Atomic Blonde, which is a sister franchise to Wick, can all be included in this trend.

While its several contemporaries are all excellent in their own way, there aren’t any other movies like the John Wick series.

It’s not just the action – it’s everything. It’s dialogue and characters perfectly tailored not only to Reeves, but to all of his co-stars as well. It’s the ever-deepening mythology that makes the world feel lived-in and all-encompassing and adds to the sense of Wick being suffocated by his past, the mysterious secret currencies among assassins that implies an entirely different structure for their society. It’s the grimly stylish gothic neo-noir look. No one sees this world the way cinematographer Dan Lausten does unless they’re watching these films. I mean, look at these shots- 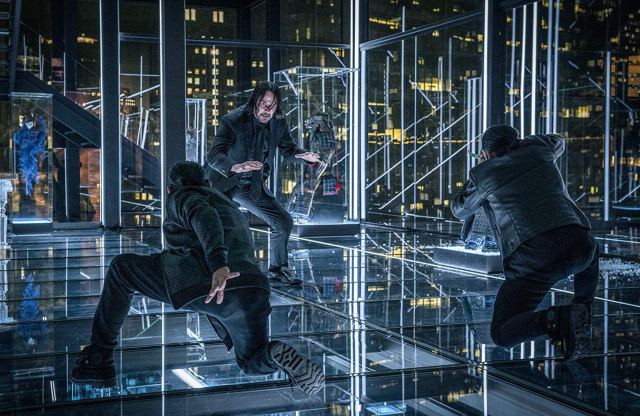 But there’s something immediately different about Parabellum. Wick’s kills aren’t as efficient as they were. He’s going out of his way to kill his assailants in themed ways, and when he does use his handgun, he’s firing three or four execution shots instead of just one. Action scenes, and actions themselves, don’t seem motivated the way they were. The faceless mooks are now truly faceless, covered in armored helmets or turbans, partially removing the brutality of Wick’s extended rampage.

This series has always been about Reeves and Stahelski showing off, but where it had previously only been background knowledge to a compelling story, in Parabellum, it’s out in the open, with many scenes screaming at viewers that this doesn’t happen for any diegetic reason, it happens because Stahelski thought it would be fun.

And it is fun! There are a lot of laughs and squeals in Parabellum that aren’t there in previous installments. But for all its dogs-climbing-walls and “knife snowball fights” madness, Parabellum is mostly missing that sense of doom that gave the preceding film its bite. John Wick: Chapter 2 is an action opera, a dramatic, draconian opus on destiny, damnation and the effect violence still has on violent people, and most of the series’ strongest contemporaries can say something similar.

What makes Parabellum stand out as having a particularly weak story – and this is kind of a spoiler – is that nothing changes. Several new characters and plot threads are introduced, and they’re all tied up just nicely by the film’s end, but after thousands of gallons of blood spilled, all the existing characters manage to end up essentially where they started. “Consequences” is this movie’s favorite word, but it doesn’t seem to have had any. 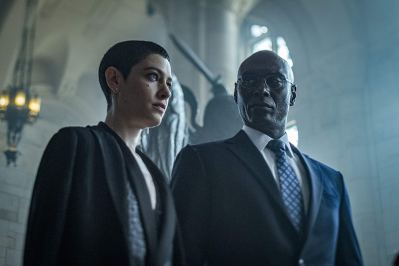 They really couldn’t have gotten Carrie-Anne Moss for this? She’s not busy.

If Parabellum feels like an excuse to string together action scenes Stahelski and Reeves thought would be cool, it’s because they’ve discussed their creative process and we know that’s exactly what happened. What doesn’t give them a pass is the fact that Chapter 2 was developed the same way, and Mission: Impossible – Fallout, another stunt-driven action movie with extremely strong theming, had a similarly haphazard scripting process with much stronger results.

Or maybe just different results. Movies don’t have to be what I want them to be, and all evidence to the contrary, I don’t actually want to tell filmmakers what to do. Stahelski is putting everything he ever wanted to make into this series, from the action to aesthetic choices and details that would seem to clash on paper but make some crazy form of sense when combined the way they are here. If he and Reeves want this installment to be a little more fun than the last two, they get to do that.

Parabellum is gorgeous, silly, audacious, spectacularly choreographed and shot and represents a tangible pull away from the CGI-laden set pieces of Marvel and other Disney properties. But it’s different than what I was hoping for.

Parabellum put together a $56.8 million debut last weekend, becoming the first film to dethrone Avengers: Endgame. That opening represents more money than the original John Wick made in its entire run – that film capped out at $43 million and change in 2014.

This series’ expanding popularity is highly encouraging from a number of different angles. Fury Road was supposed to be the flagship for a new kind of action film, but building all those vehicles made it so expensive that, despite critical fawning, it half-heartedly broke even at the box office, so there’ve been no imitators, and with writer/director George Miller currently suing Warner Bros, wheels aren’t close to spinning on a direct sequel.

But now with John Wick, we’re not only seeing mid-budget films that are consistently smash hits with critics and turning huge profits, we’re not only seeing a repeatable formula for both, we’re seeing the appetite for this kind of quality movie quantifiably growing as time moves on. Parabellum could start, or more properly accelerate, an avalanche of similar films. At the very least, John Wick: Chapter 4 was greenlit over the weekend for May 2021. I, and a demonstrably growing number of others, can’t wait.