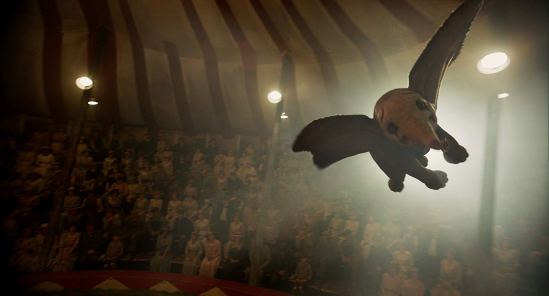 3/10 When a movie is advertised as “from the imagination of Tim Burton,” you tend to go into it expecting a real blue-blooded Tim Burton passion project, one that he really took ownership of and fought hard to get the property rights and push past the finish line.

But that’s not Dumbo. Walking out of the movie, it’s difficult to figure out who was ever passionate about this project.

In 1919, circus horseman Holt Farrier (Colin Farrell) returns from World War I one arm the lesser to find his old troupe in shambles, his wife months-dead of influenza and his two children rudderless. Ringmaster Max Medici (Danny DeVito) hires Farrier back to take care of the circus’ new pregnant elephant, who soon gives birth to Baby Dumbo (Edd Osmond in the motion capture suit). Dumbo is immediately noticed for his ears, which dwarf the rest of his body. Farrier’s daughter, Milly (Nico Parker), soon discovers that he can use these ears as wings and fly.

The flying baby attracts attention from entertainment entrepreneur V.A. Vandevere (Michael Keaton), who buys out the circus and whisks off all the important characters to Dreamland, where they perform with trapeze artist Colette Marchant (Eva Green). 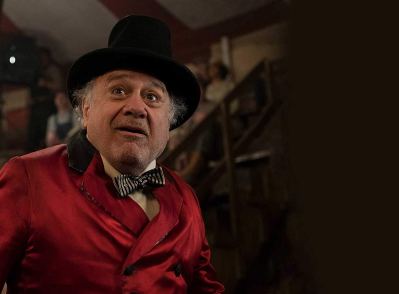 Medici doesn’t know if this is a miracle or bullshit, but he knows for sure it’s a goddamn goldmine.

The first thing you notice about Dumbo is that it very much is a Tim Burton movie, to what is at this point an extent of bored disappointment. Every character shot is a medium, from the pelvis up, with the characters in almost the same place of the frame and almost the same amount of headroom, shot against either a blurry greenscreen or with such a low aperture that the background looks like blurry greenscreen. The color palette is strangely muted, but with the familiar tinges of gold and midnight blue in outdoor shots. There’s the ever-present focus on blank-faced children in identity crisis and a garish bully character.

But as much as Burton’s enforced his visual style here, he doesn’t seem to have enforced much else. Dumbo is a colossal mess. Almost every part of the movie is either pulling in a different direction or not pulling at all, with any rare moment of coordination seeming more like a coincidence than a planned effort.

There is a massive crater of information between the script and the final edit. A dozen half-finished plot elements litter the film – setups without payoff, payoffs that weren’t set up and entire scenes that don’t contain either. It feels like what’s happened is they shot every page of a script for a three hour or so movie, then stuffed it into a 115 minute runtime. At no point did anyone – Burton – sit down with the script and prune it, and at no point did anyone – again, this would be Burton’s responsibility – sit down and examine what needed to or could be cut from the final product to make a stable narrative.

Looking at Dumbo’s journey to the screen, it looks like writer/producer Ehren Kruger is the person who really pushed this through. The story is that he approached co-producer Derek Frey with a script in 2014, and Frey, head of Tim Burton Productions, greenlit it. The combined careers of Kruger and Frey paint a vivid picture of what viewers should have expected going in to Dumbo. These two have made their careers pinching off studio era-style franchise features, many of which are trading on the Tim Burton brand – which saw a fortuitous drop in quality right around the time Frey started producing for him.

The adult cast members are all doing basically whatever they want, which is the biggest indicator of Burton’s lack of direction – nobody seems to have been given any notes at any point in the process. It’s mostly fine among the adults, who have actually developed characters and are at least trying, but Nico Parker, a 14-year-old girl in her first movie role and the defacto lead actor, desperately needed some guidance, and she clearly didn’t get it. Her complete lack of expressiveness is a huge problem for the film.

Ehren, much more of a producer than a writer at this point, most prominently worked on franchise projects like The Ring series and the later Transformers movies. Several of his credits are listed as “uncredited rewrites.” Frey is a career Burton man, assisting Burton during his slow decline in the late ‘90s and early ‘00s, and then producing for Burton during his sharp decline immediately after that. Frey has produced almost every Burton film starting with, ugh, Charlie and the Chocolate Factory in 2005.

Dumbo is over-produced, under-directed and looks vaguely like a Tim Burton movie, which I guess is exactly par for this creative team, once you realize who it’s really comprised of. These are movie salesmen, not moviemakers, and the guy who was supposed to bring the moviemaking chops – Burton – is someone who doesn’t seem to have cared about his work for several years now.

At the same time, Dumbo represents a bit of a full circle moment for Burton, and a hollow homecoming. One of the last films he seemed to actually want to make, 2010’s Alice in Wonderland adaptation, is what started this whole parade of live-action Disney remakes when it unexpectedly made $1 billion, at the time only the sixth movie ever to hit that mark. Disney is, of course, not Burton’s filmmaking home – passion projects, one of the last of which Disney happened to hold the rights to, are. He’s back at the studio, a still-popular name they can use to hawk tickets, but he’s clearly not back to material he cares about.

The parade of Disney remakes will, of course, march on. Aladdin, The Lion King and Maleficent: Mistress of Evil are all slated to hit theaters this year.