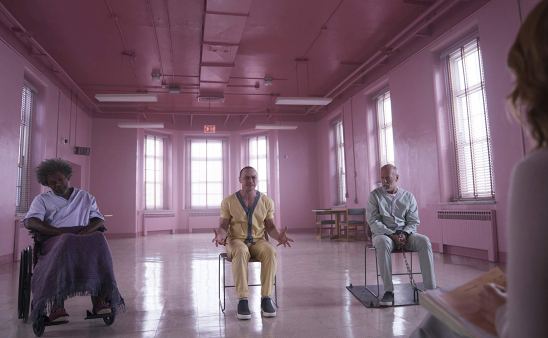 The year’s first major release in Glass pieced together a $46.5 million opening over the long Martin Luther King Day weekend, short of Universal’s $50 million hopes. The Upside and Aquaman fell to into the second and third rung, while Funmation’s Dragon Ball Super: Broly scored a surprise no. 4 finish with $11.9 million. Spider-Man: Into the  Spider-Verse, in its sixth weekend in release, also cleared $10 million in the no. 5 slot- Box Office Mojo

Glass is the culmination of several storylines for writer/director/producer M. Night Shyamalan. It’s the long-awaited sequel to one of his first films, and also consummates his rise back to popularity after making some of the most hated movies ever in the late ‘00s. Shyamalan gave several interviews on the past 20 years- The New York Times

Apparently, he had the ending for Glass already in mind all those years ago- The Hollywood Reporter

Shyamalan has written almost every movie he’s been involved in. Owen Gleiberman writes that may be what holds him back- Variety

Broly speaks to the massive continued popularity of the Dragon Ball franchise in the U.S.- The Ringer

A full analysis of the snubs- The Hollywood Reporter

For those not available yet and for anyone looking to catch them on the big screen, Cinemark will be holding its annual Oscar Movie Week Feb. 18-24, with tickets on sale now- Business Wire

Additionally, the Times staff has compiled a large reading list on each Best Picture nominee to help establish where each of these movies are culturally- The New York Times

In short, every major contender has been met with some degree of controversy- Variety

There’s particular anger surrounding Green Book, which touches on racial issues in ways that many found insensitive, and Bohemian Rhapsody, which brings AIDS back as the gay plague– Vulture

After establishing its original content service in 2012, Roma represents Netflix’ first Best Picture nominee. The streaming service has reportedly spent at least eight figures on campaigning for it- The Playlist

Despite the film’s mass acclaim, AMC and Regal cinemas are refusing to screen it during their Best Picture showcases. The chains have long refused to showcase Netflix films- Variety

In other Netflix-related news, a U.K. study has found that the service would lose 57 percent of subscribers if it added advertisements- Screen Rant

Ten years after the Academy widened the Best Picture category with the intent of including more popular films after The Dark Knight was snubbed, Black Panther has finally become the first comic book movie to earn a Best Picture nomination- Vulture

After 30 years as one of the world’s most prominent directors, Black Klansman represents Spike Lee’s first Best Director and Best Picture nominations. He isn’t the type to be sour about that or anything- The Los Angeles Times

MoviePass stock is down after the company sold 333.3 million stock units in order to raise money- Deadline

In the age of #metoo, theater and film industries are turning to “intimacy coordinators” to make sex scenes more comfortable for actors- The New York Times

The Sundance Film Festival kicks off tomorrow in Park City, Utah. Here’s what experts are expecting- The Atlantic

Meanwhile in Sweden in the Goteborg Film Festival, eight viewers at a time will be sealed into specially-made sarcophagi with screens and speakers for the premier of Swedish-language apocalyptic science fiction Aniara- The Hollywood Reporter

And finally, looking back at Napoleon Dynamite, which turns 15 in June- Film School Rejects