It me! Images courtesy Annapurna Pictures.

5/10 In 2015, tired of making Will Ferrell movies, Adam McKay wrote and directed The Big Short, a strange docu-comedy that aimed to explain to mass audiences how the 2008 economic collapse happened, and that movie won a ton of awards and nominations even though it was essentially just a more boring Wolf of Wall Street with more explicit moralizing about illegal stock market practices and the 2008 recession is really not that complicated anyway.

So here we are, three years later, and he made another one, this time going after former vice president Dick Cheney.

Vice chronicles the rise of Cheney (Christian Bale) and his partner in crime, Donald Rumsfeld (Steve Carell). Eventual running mate George W. Bush (Sam Rockwell), despite being perfectly cast, is pushed to the background, while Cheney’s wife, Lynne (Amy Adams), is given prominence as a Lady MacBeth figure who pushes Cheney to assume power, and even aspire to it in the first place. The events are narrated by Kurt (Jesse Plemons), a fictionalized soldier who always looks and sounds like he hasn’t been able to poop for several days.

Vice is a movie at war with itself. McKay, who directs, writes and produces, seemingly without a clear idea on how to handle the material, defaults at several different points to several different techniques he’s used in the past without much coordination between them.

Vice takes several detours into comic relief, most of which are effective enough on an individual level, but aren’t consistent enough and don’t have enough ties between them to make the movie a real comedy. The jokes are highlighted by the end-credits fakeout about halfway through the movie, when Cheney’s story ostensibly ends following his realization that he can’t run for president in 2000, but it’s also not particularly effective given that viewers know he’ll win the vice presidency that year going in. This could have been a hilarious gag if worked into the first 20 minutes or so, which would have involved breaking up the timeline in a much more dedicated and thought-out way than Vice does.

The Big Short’s treatment of the fourth wall works itself in just as often, but seems out of place in Vice. Instead of adding glee to the ethical carnage of Cheney’s career, Kurt’s somber narration is constantly throwing a wet blanket on any narrative momentum Vice builds up. As the movie wears on into the Bush administration, more and more characters begin to break the fourth wall as well in scenes that feel like McKay running out of ideas, a feeling that’s reinforced by how often Kurt will suddenly add separate information on to what he was saying as if he’d originally forgotten to mention it.

Vice just doesn’t know how to handle Cheney’s story, and that’s obvious from the very first scene. The film opens with Cheney getting arrested for driving while intoxicated, then cuts to him taking charge during the 9/11 attacks, then cuts back to him working on telephone lines in the early ‘60s and getting arrested for public drunkenness again. It’s the only truly giant timeskip in a movie that could have been full of them, and it happens before the title card. 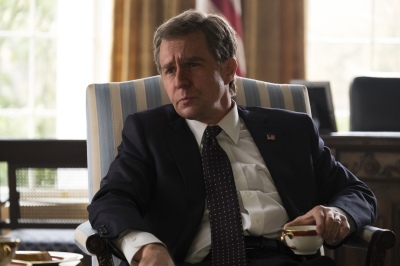 Sam Rockwell was born to play George W. Bush and you fuckers gave him five minutes of screentime. I am never going to forgive that.

The film ends – well, the final shot within the narrative comes to rest – on Cheney’s failed heart, laying discarded on an operating table after he received a transplant. His three heart attacks constitute the movie’s only real running gag – in otherwise calm moments, he’ll almost ashamedly say that he needs to go to the hospital immediately, a performative tick that’s warm and funny by the end. Structuring the narrative around his three heart attacks probably would have required branching further from the truth than Vice wanted to, but establishing them more clearly as a theme would have at least given an anchor to a film that doesn’t seem to have one.

The real ending is on Cheney himself turning to break the fourth wall and lambaste the audience for judging him. We’re complicit, he says. We are made safe by his actions.

I think this was intended to be a chilling reminder that all of the movie’s events are still very recent, but instead it comes off as baffling at the end of a movie that goes to great lengths to detail how Cheney circumvented the American people at every step of the process. We didn’t vote for him, a recount that might have swung the initial election was halted and Cheney wasn’t the head of the ticket anyway; we didn’t approve the Iraq war, it was sold to us by Cheney personally with false information; and we didn’t benefit from it, there were no weapons of mass destruction and there’s evidence to suggest Cheney was lining his own pockets by giving his private sector company, Halliburton, continuous access to lucrative war contracts. All of this is explicit within Vice.

But Vice’s actual real ending comes in the mid-credits, when a present-day Trump supporter dismisses the movie as liberal propaganda, seemingly overlooking the amount of factchecking that must have taken place. The film cuts a handful of times to this focus group, and it’s a real shame that it didn’t do more with the conceit. Vice takes a few direct swipes at Fox News as the Republican Party’s propaganda tool and the focus group work that goes into making it effective, but despite public opinion playing a major part in many of the film’s events and Fox News playing a major part in shaping that opinion, and despite an absolutely perfectly cast Megan Kelly (Naomi Watts, who has a sinister good time in the minute or so she’s onscreen), these elements are minimized. The film also glosses over the end of the Cold War and Operation Desert Storm, which had dramatic impacts on the same public opinion it’s trying to lampoon.

Vice is gifted with not one but three potentially poignant endings, but it doesn’t really build toward any of them. It has a cast for the ages and it has its moments, but it feels like both the initial script and the final edit needed to be re-organized to get everything pointing in the same direction.