4/10 It’s 2018. The Transformers series was met with poor critical reception pretty much on arrival, but last year brought with it the first indication that audiences might be growing tired of it as well. Franchise director Michael Bay, who has a history of sexualizing underage girls in his movies, could get #metoo’d at any moment. Paramount Pictures needs proof that its star franchise can successful without Bay and all that he brings with him, with a potentially different cast of characters and on a much smaller scale, proof that it can remain a reliable and more varied source of income going into its second decade of existence.

As the Decepticons clinch their final victory in the war for the techno-organic planet Cybertron, Optimus Prime sends his Autobots out through the cosmos to establish a base on another planet so they can regroup. One such Autobot, Bumblebee, crash lands in California, right on top of military exercises being led by Jack Burns (John Cena). Bumblebee (Dylan O’Brien) saves the team from a pursuing Decepticon and then escapes himself, but not without irreparable damage to his voice box.

Several years later in 1987, Charlie Watson (Hailee Steinfeld), a teenager in desperate need of a car, finds Bumblebee hiding in a local junk shop disguised as an old Beetle. She gets him running again, only to discover that he is a living organism. The two engage in wacky adventures, but more Decepticons are on their way.

Bumblebee is essentially an extremely safe retread of the first Transformers movie – a late teenager who needs a car finds a conscious one in Bumblebee, and through their bond they work through a difficult family life while also being wrapped up in Cybertron’s cosmic conflict.

Shia LaBeouf’s red-blooded nitwit character trying to get his incredibly sweaty hands on Megan Fox is replaced with Steinfeld’s Charlie Watson, whose sex drive is muted and is more focused on getting past the death of her father. The modern-day setting is replaced with a warmly nostalgic 1987, and the giant cities in which transformer combat has taken place in the past is succeeded by redwood forests and deserted military docks. Gone are Bay’s signature color palette and overabundant product placement. The cast of giant robots is reduced, their designs simplified and none of them are extraordinarily racist caricatures.

In execution, Bumblebee feels less like it was built from the ground up to be the way that it is and more like it arrived there after a long blind-leading-the-blind journey with a significant amount of mad-libbing.

How can we demonstrate that Watson has grown? She’ll have a skill that she hasn’t used since her father’s death that she whips out in the climax! What’ll that skill be? Uh… competitive diving! 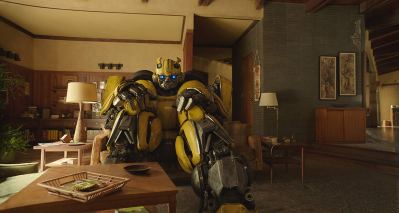 Bumblebee is not a good movie. The editing is bad. The script is two or three drafts away from where it needs to be. The green screen work is poor. These individual elements, much like the story as a whole, feel like the film version of baby’s first five-paragraph essay – it was made to satisfy a bare-bones rubric without a real understanding of the end goal.

And like a third grade teacher who’s just happy to see students following basic instructions, critics are heaping praise on this movie for the superficial changes it makes and its incredible ability to, with tremendous effort, just barely manage to stick to the basic monomyth skeleton that’s present in some way in almost every competent story ever told.

Like Aquaman, the consensus seems to be “at least it’s not as bad as [insert terrible movie from same series],” and as with Aquaman, I just don’t understand that logic. Bumblebee’s main accomplishment is strenuously contorting itself to fulfill basic requirements of storytelling, and should be viewed as just that – basic. It’s poorly executed, but there’s nothing in it to actively prevent you from having a good time.