9/10 A Simple Favor is a fiendish delight of a film, one that was clearly fun to make and is just as fun to watch.

Stay-at-home widow Stephanie Smothers (Anna Kendrick) puts the other moms of her Connecticut suburb to shame with her handy crafts and recipes and eagerness to be involved with her son’s elementary school education. Through her son, she befriends her polar opposite as a mother – the rich Emily Nelson (Blake Lively), who curses like a sailor and starts her batches of stiff martinis in the mid-afternoon. Smothers and Nelson – and Nelson’s husband Sean Townsend (Henry Golding) – get on like a house on fire, until Nelson suddenly goes missing. Smothers must unravel the sinister mystery of her new best friend, and reveal her own mysteries in the process.

A Simple Favor is a riveting, jovial thriller, seamlessly blending comedy, noir and horror elements into a tirelessly twisting plot. The dynamic between the leads is completely electric – Kendrick is at her squeaky, jumpy best, and Lively is smooth and sultry and almost masculine. The costumes are thoughtful and noticeable in a movie where status and power, as expressed through clothing, is a key dynamic in several interactions.

As characters explore their own pasts, we get multiple scenes in which Smothers’ or Nelson’s lies to each other are voiced over footage of their darkest secrets, creating an almost elemental disconnect. Their skeletons become even more shocking betrayals when superimposed over the versions of the truth they tell others.

A Simple Favor is a remarkably efficient film, covering several movies’ worth of plot twists in its average 117 minute runtime – this ultimately becomes its biggest detriment, as plot twists can’t help but lose potency once viewers are accustomed to the status quo radically changing every 10-20 minutes or so. Despite this, and despite the breakneck pace demanded by the sheer number of plot points, most scenes are still meticulously shot nail-biters that never feel rushed, and the film carries itself seriously in every moment. 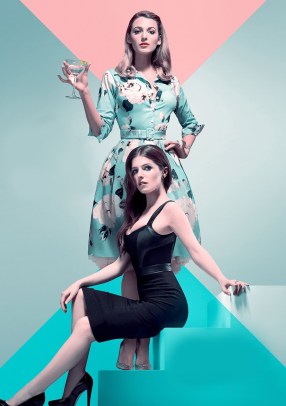 The costume work is absolutely spectacular. In this primary promotional image, both Nelson and Smothers are wearing dresses significant to the plot. In Smothers’ case, the dress belongs to Nelson, and she gets caught while curiously trying it on. Smothers becomes stuck in the dress, literally trapped in her impersonation of Nelson. It’s such a wonderful little element within the scene.

There’s this flourish that gets used several times, where the film will cut to a double-detail – like, a close-up of Smothers’ gloved hand putting information into her glovebox, and both the information and the fact that she’s wearing gloves are significant details, so it’s like getting two shots at once. It’s all the glee, deftness and creativity A Simple Favor has to offer epitomized in one tactic.

I really wish he’d apply that talent to some of his other projects.

A Simple Favor was conceived as a follow-up for the market established by Gone Girl and The Girl on the Train, similarly complex films based on books driven by women lead characters, but A Simple Favor is a very different movie. It’s much more tongue-in-cheek and easier to watch than its peers, no less twisted a mystery, the kind of rare film that can consistently make you laugh uncomfortably. It’s a rush of an experience, and comes highly recommended.

This entry was posted in Entropy and tagged #anna kendrick, A Simple Favor, Blake Lively, Gone Girl, Henry Golding, Paul Feig, The Girl on the Train. Bookmark the permalink.