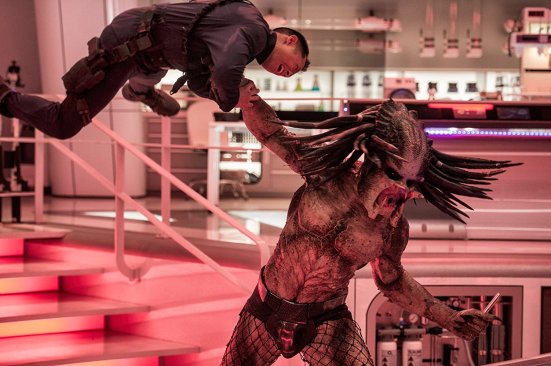 Is it me, or has the predator design gotten really lackluster since the first movie? Image courtesy 20th Century Fox.

1/10 The Predator is one of the most appalling things that’s ever been released in theaters.

I don’t want to give this a full review – it’s not a full movie, so why would I? It was established very publicly well before release that The Predator would instead be a mashup of re-purposed footage with almost no thought given to the final cut’s merit as a standalone show.

The big controversy surrounding The Predator just before release was the story that writer/director Shane Black had knowingly put a registered sex offender into the movie without telling anyone on the cast, and given him a scene in which he hit on female lead Casey Bracket (Olivia Munn). The scene was pulled after the news broke, and it is maybe the most telling thing about this film that you can actually see the hole this nothing scene left when it was taken out. Bracket has no introduction, and suddenly appears on camera in a close-up. She later says she’s tired of being called “sugar” or something, which only makes sense as a callback to this scene.

So not only do we have this awful thing happening behind the scenes, but also scenes are viewed as so disposable by the filmmakers that they are lifted right out without thinking about any other adjustments that need to be made. It would have been incredibly easy to give Bracket another establishing shot and cut the callback, but The Predator had already been so mangled by reshoots and re-edits that there wasn’t a point.

The final cut of The Predator represents an abject betrayal of film’s potential as an art form, but it would have been completely unforgivable even if the studio hadn’t stepped in because of Black’s original idea – predators vs. “Looneys.”

In The Predator, Army sniper Quinn McKenna (Boyd Holbrook) witnesses a predator crash-land on Earth and kill two of his squadmates. To cover the incident up, McKenna is accused of murdering his squadmates, diagnosed with a mental disorder and packed in with a who’s-who – well, really a what’s-what, the way the movie treats them — of pop-cultural mental disorders. There’s Anxiety, played here by Coyle (Keegan-Michael Key), and Tourette’s Syndrome, played by Baxley (Thomas Jane). McKenna’s main ally is Suicidal Depression, played by Nebraska Williams (Trevante Rhodes), which makes sense because he’s the most normal one when he’s not trying to hurt himself.

Sensing what was about to happen, McKenna sent a piece of the predator’s gear home to his son Rory (Jacob Tremblay) to clear his name. After meeting up with Bracket so that there could be another normie to say all the real dialogue that’s not whacko antics, the colorful group of one-note stereotypes must race against the predator to get to Rory, who is a retard.

That’s not my language, that’s The Predator’s. They steer clear of using the word “Asperger’s,” that has too much baggage, but “retard” is fine. “Retard” is a friendly, playful word. Because these aren’t those lame, crybaby mental patients you hear about on the news who think stigma of the mentally ill is harmful to society. These are the cool, hip mental patients, who know their place, and can take a joke!

And really, what’s the difference between a joke and a pejorative, right?

The Predator was initially conceived by Black as a movie that would bring mental illness into the traditional Predator narrative of protagonists who parallel with the titular aliens, meaning that this peculiarity and the particular way mental illness is treated was always written into this script. Black had written his characters more or less as they are in the theatrical cut from the ground up.

Given that this is one of the only intended elements that remained intact, you’d think it might have been thoughtfully done, and you’d be very extremely wrong about that.  Tourette Syndrome causes involuntary vocal tics that sometimes manifest as involuntary cursing, so of course, Baxley’s role is to suddenly swear at the most comically inappropriate moment. Anxiety is frequently covered by humor, so of course, Coyle’s job is to crack wise at every possible moment. The depressed character tried to kill himself before, so of course he’s going to find a productive way to sacrifice himself during the climax.

But completely eclipsing those stereotypes, for me, is the – also completely common – presentation of Asperger’s Syndrome as merely a tradeoff, as an exchange of social skills for the savant talents present in a very small portion of that population. This is probably the most disgusting still-accepted stereotype in popular media, the idea that autism is something with distinct and identifiable benefits, just a neurologically mandated version of the socially awkward genius trope. In The Predator, it’s specifically advanced that people with Asperger’s are the next step in human evolution, incorporating the belief that autism is fun for the whole family into its bizarre plot smorgasbord that includes Global Warming as a reason for increased predator activity on Earth and Bracket getting a government position because of a letter she wrote in elementary school.

Humans are not Dungeons and Dragons characters. People with autism aren’t just characters like everybody else who put all their points into intelligence and none into charisma. Sometimes, your brain just sucks. Any presentation of autism as something good, as something that people suffer from but may end up better off with on the balance, is a horrific dismissal of the struggle millions of people go through every day, as are the other stereotypes The Predator presents.

And maybe the most atrocious thing is the movie is fully aware of this. That’s why the mentally ill designation is treated as a brand against McKenna. That’s why we have a neurotypical lead character to drive the plot and take the lion’s share of the dialogue, and why he’s given Bracket as another normie to play off of and why they’re the only ones who survive as the breeding pair.

As much as the crazy edits make The Predator an incoherent mess on its own merit and as much as the lack of integrity makes it a punch in the face to cinema as a concept, even a director’s cut would be one of the most horrifyingly offensive things released in theaters in years.