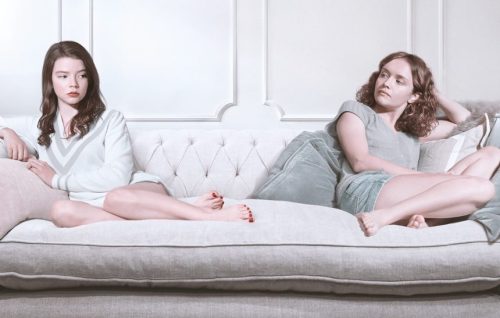 Clothes obviously change throughout the film, but the dress code for Reynolds and Amanda is always constant — high collars and tiny shorts or skirts. Since they’re mostly shot from the waist or neck up, it’s always kind of a shock when their legs make it into a shot and they’re suddenly revealed to be half-naked. In a film this meticulous, there’s obviously some degree of meaning there. Images courtesy Focus Features.

9/10 With Hollywood seemingly unable to produce more than a few movies a year without obvious gaffs, Thoroughbreds is a refreshing spurt of disciplined, technically perfect filmmaking and the birth of a new star in writer/director Cory Finley.

In a wealthy Connecticut suburb, childhood friends Lily Reynolds (Anya Taylor-Joy) and Amanda (Olivia Cooke) are consumed by wealth-driven apathy. Amanda suffers from borderline personality disorder and is under investigation for brutally killing her family’s horse. Reynolds is still reeling from the death of her father years earlier, which is exacerbated by her new stepfather Mark (Paul Sparks) being a giant prick. Together, they plot to blackmail a hapless drug dealer, Tim (Anton Yelchin), into murdering him.

Thoroughbreds is the last of five posthumous releases for Anton Yelchin, who died in a freak SUV accident in 2016.

Thoroughbreds is gimmick-free, tac-sharp filmmaking. The screen shines with a calm mastery. Absolutely everything is perfectly framed. Where shot/reverse shot gets boring in the hands of a filmmaker who’s not really paying attention, Finley turns it into a dance between characters who never enter each other’s space. There’s also a strong preference toward long shots that give the actors a ton of leeway.

Cinematographer Lyle Vincent uses an incredibly shallow focus in almost every shot — at one point, only a single word on an entire page is legible. The perfectly calibrated focus within the perfectly calibrated shots adds further to the feeling of comfort, that you’re being guided through the movie by someone who knows exactly what he wants to show you and why.

Like, there’s one shot of Reynolds playing with her necklace in which the focus racks from the necklace to her fingers and back exactly as her hand moves, it’s so wonderful.

The extreme attention to detail extends to other elements of the film. Thoroughbreds is the kind of movie that dramatically rewards subsequent viewings as you hunt for details in the background, and even ones in the foreground that may have gone by. Hair and makeup are so perfect throughout the film that you can practically smell the accompanying perfume.

This chessboard is set up wrong and I cannot unsee it.

The crisp, traditional filmmaking is in the service of a strange, twisted story about Reynolds learning how to lie and murder. At the start of the movie, she and Amanda are polar opposites, but not at all complimentary. Amanda is a full-on sociopath and is open about it to the point of making others uncomfortable, and Reynolds is mentally stable but constantly lying — and lying badly. Everyone she tries to control sees all the way through her. The moral of the story, if you really want to apply one, seems to be that simplicity is the better part of valor when plotting a murder.