Salvage operation ‘All the Money in the World’ is pristine 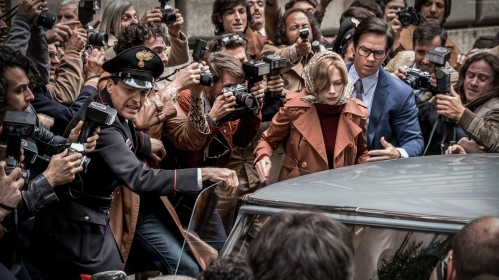 7/10 Come one, come all, see the star-studded year-end Oscar contender you’ve come to expect in late December! It’s a true story brought to you by a name director and a cast that brings everything to the table! We’ve spared no expense to bring in Mark Wahlberg for his box office star power, Michelle Williams for her all world talent, and Christopher Plummer for his availability!

All the Money in the World tells the real life story about the kidnapping of John Paul Getty III (Charlie Plummer), who spent five months in captivity after disappearing from Rome in July 1973. The grandson of oil tycoon J. Paul Getty (Christopher Plummer), Getty III is set for a ransom of $17 million, but fearing that his other grandchildren would become targets, the senior Getty won’t pay it. Instead, he hires former CIA agent Fletcher Chase (Wahlberg) to retrieve his grandson the hard way.

Caught in the middle of it all is Gail Getty (Michelle Williams), John Paul III’s mother. Gail married into and divorced out of the family because of her ex-husband John Paul Getty Jr.’s (Andrew Buchan) alcoholism, an affliction that boxes him out of the current crisis. Gail must herself deal with her former father-in-law, who resents her for taking his grandchildren.

The big story with All the Money in the World is obviously the 11th hour recasting of Christopher Plummer, who replaced the disgraced Kevin Spacey in the most prominent role. This process could have easily gone badly sideways and become a point of ridicule for the film, but it doesn’t. Unwilling to let the controversy surrounding Spacey sink his movie, director Ridley Scott quickly, quietly and at great expense cast Plummer and made sure Wahlberg and Williams were available. Plummer flew in and shot the part in nine days between Nov. 20 and 29, with less than a month to go before the film’s Dec. 22 release, which it met. There’s no digital trickery, no obvious tells that this was last-minute work, they genuinely did Getty’s entire meaty part of the movie with less than a month to go before it had to be in theaters.

It turns out Spacey only did 10 days of shooting himself, so I guess it wasn’t really that impressive, but come on! This has to be the best movie ever made that was completed less than a month before release.

Plummer absolutely knocks it out of the park with a performance that ought to receive awards attention in any context, walking off the street to become the best part of the movie. The production was already planning to build an awards campaign around Spacey’s performance, but their campaign probably became even stronger with a better story and what I’d wager is a better performance — though I’d still love to see Spacey’s take for a point of comparison.

Reshooting a movie under this degree of time pressure would take an extreme competence on the part of the director, and the rest of the movie reflects that. After a 50-year career of extreme highs and extreme lows, pretty much the only thing you can’t call Scott is inexperienced. His steady hand is an obvious guide through the film.

If it ever sees daylight, Spacey’s performance will be an incredibly interesting reflection on exactly what degree of creative power actors have in a movie. This is a performance that the marketing team was going to build an Academy Awards campaign around, but they may end up doing the same thing with the replacement performance. Are actors really that interchangeable, even at the most prestigious level?

Still, there are about a dozen ways this could have gone better, the most obvious being a timeline rearrangement. The film does a deep dive into the social politics of being a Getty and the already-existing friction between Gail, J. Paul and John Paul III, but it’s all awkwardly front-loaded into the first 20 minutes. We jump from the kidnapping in the opening scene to the ’60s back to 1973 back to the ’60s and back to 1973 in short order, there’s some narration from John Paul III to help us keep track, and then the rest of the movie is linear with no narration. That’s not the way to go about it when you have a couple of key flashbacks — it feels like the movie is being told by that disorganized buddy who keeps interrupting himself to give background he forgot to set up.

The heart of the story is the friction between Gail Getty and Chase, so the goal should be to get them in the same room as soon and as often as possible. Go straight from the kidnapping into Getty’s refusal to pay the ransom and his private solution, then spread the flashbacks throughout later in the film where they’d be more impactful and support its sophisticated feel.

There’s also a lot added that didn’t happen and a lot taken out that did. Accuracy shouldn’t be a sticking point, but when the exchange of fact and fiction are a wash, fact is always going to be more interesting. It would have been good to see things like hostility from the Italian police force and Chase wasting time with false leads make up more of the conflict.

This entry was posted in Entropy and tagged #alien, #mark wahlberg, #ridley scott, All the Money in the World, Christopher Plummer, Harvey Weinstein, Kevin Spacey, Michelle Williams. Bookmark the permalink.