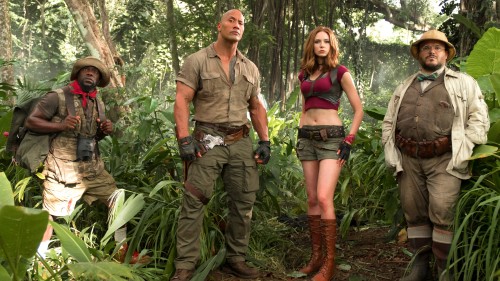 God, it seems like half the frame is Karen Gillan’s bare skin — how did they think people would just go with this? Images courtesy Sony Pictures Entertainment.

In the all-new, all-different Jumanji: Welcome to the Jungle, the board game from the 1995 original has evolved into a video game. Where it used to bring the jungle to the players, now it brings the players to the jungle, absorbing them and transforming them into their video game avatars.

Lost to time, the game is unearthed by four high schoolers in detention, which it quickly ensnares. Disgraced football star Anthony “Fridge” Johnson (Ser’Darius Blain) becomes the tiny Franklin “Mouse” Finbar (Kevin Hart), the group’s zoologist and weapons specialist; popular girl and cell phone addict Bethany Walker (Madison Iseman) becomes the obese and extremely male cartographer Shelly Oberon (Jack Black); the shy Martha Kaply (Morgan Turner) becomes Ruby Roundhouse (Karen Gillan), a scantily clad assassin; and nerdy video game expert Spencer Gilpin (Alex Wolff) becomes the bold, muscle-bound archaeologist Smolder Bravestone (Dwayne Johnson). Their only way out is to finish the game by returning the sacred jewel, which is provided, to the jungle’s guardian jaguar, but Russel Van Pelt (Bobby Cannavale), who is possessed by the jewel and commands all of the jungle’s beasts, will stop at nothing to reclaim it.

I was really nervous about Jumanji: Welcome to the Jungle from the outset because it looked like they were going to get really racist really quickly, but those pitfalls are evaded. What’s not evaded is the sexism built in to Roundhouse’s outfit, controversy about which has dogged the movie since the first images were released. The explanation is that she’s a video game avatar and that’s how video game avatars are dressed, and that’s true, but it’s also not an excuse. You don’t get to have your dehumanizing outfit and condemn it too. “Monkey see monkey do” sexism is still sexism. In fact, it might be a tad worse, knowing better and deliberately deciding to not do better. As wonderful as it is, Jumanji: Welcome to the Jungle absolutely cannot be let off the hook for this.

Jumanji: Welcome to the Jungle is tack sharp. The plot is filled with action and twists but still under two hours. The jokes land. Van Pelt is sinister and even a little scary. Johnson and Hart are adorable. From the top down, it’s just really spectacularly well done.

What elevates this film and makes it such a success at transitioning a plot to a new generation is its metastory, which is uniquely and beautifully tailored to a millennial and post-millennial audience. As millennial, we have this built-in cynicism toward the idea of ourselves as capable adults, and Jumanji features four kids on the cusp of adulthood fast-forwarded 10 to 15 years into fully developed bodies and minds. It is essentially a story about overcoming Imposter Syndrome — the only way to advance is for each character to trust themselves as experts and liberally apply their strengths, but they have to learn the assertiveness to do that.

When Fridge Johnson finds himself rattling off vital, actionable information about animals he’s never heard of and realizes, for the balance of the game at least, that he’s one of the top zoologists in the world, it really hits home for a generation that still feels like it’s just playing house.

Jumanji: Welcome to the Jungle has five different writing credits, shocking for a film whose themes are so well coordinated. Well, Casablanca had three writers, so I guess it just happens sometimes.

The mechanics of a video game and the dynamics of the lead characters — since the stars are just avatars, you could conceivably bring all of the big names back playing completely different characters telling a completely different story — mean Jumanji: Welcome to the Jungle lends itself eagerly to a sequel, and I really hope it gets one. This is a fantastic execution of a fundamentally fantastic concept, and it deserves to be explored further.

2 Responses to ‘Jumanji’ is shockingly stellar