The Greatest Showman’s laziness is truly baffling when the talent level of the personnel involved is taken into account. High-level song and dance numbers would be child’s play to Jackman and Efron, but even in their one big scene, the singing is clearly dubbed and their dances are only captured with a careless three-camera coverage setup. Images courtesy 20th Century Fox.

4/10 The Greatest Showman has some lofty ambitions, but it’s just kind of shitty.

The film is a heavily fictionalized account of the life of P.T. Barnum (Hugh Jackman) and the founding of the circus in the 1840s and ’50s.

The main advertising boast for The Greatest Showman was its connection to last year’s breakout favorite La La Land — songwriters Benj Pasek and Justin Paul wrote lyrics for both of them. So when we compare it to La La Land later, well, they asked for it.

The number one thing that sticks out about The Greatest Showman is that none of the musical numbers are actually performed, despite a fully capable cast in Jackman, Zac Efron and Zendaya. Instead of having all the wonderful singers in the cast actually sing, first-time director Michael Gracey has them mouth over lyrics which are recorded later in a studio, sometimes by them, sometimes by an entirely different singer, and then dubbed over — something that’s extremely easy to spot, even when the actors are making an effort.

This kind of singing is physically demanding, but no one in this movie even tries to look like they’re singing. And since Gracey couldn’t find anything better to do than stick the camera to singing characters like glue, it gets really weird really quick. Like when Loren Allred is clearly putting her entire diaphram and throat into this wonderful performance, and Rebecca Ferguson is barely even moving her lips, let alone her abdomen.

Shortcuts are also taken around dancing. Most of the choreography is basic backup dancer nonsense presented as lead performances, and the parts that are complex are filmed around obscuring the dancers’ faces to hide the fact that they’ve subbed in for the actors. These sequences are also sped up to the point that they’re barely appreciable, for some reason. The film will also frequently slow time down, and have the lead singer of a scene move at normal speed through a hive of slow-motion activity. It’s really weird looking. 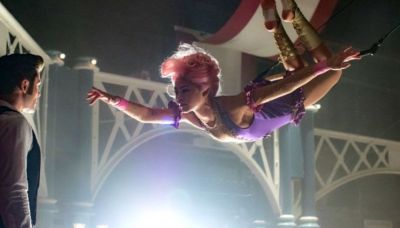 Broadening its appeal further, The Greatest Showman wrestles itself into a social justice narrative and being about Barnum enabling freaks to come out into the light, and this is the area where it actually gets kind of good. Barnum collects outcasts like dwarf Charles Stratton (Sam Humphrey) and bearded lady Lettie Lutz (Keala Settle) to display in his museum of oddities, the circus’ forerunner, but leaves them to their own devices for most of the film as he promotes the nationwide tour of Swedish singer Jenny Lind (Ferguson). This also causes friction between Barnum and his wife, Charity (Michelle Williams). A movie about the charisma required to bring this troupe together and keep it together on an absentee basis would have been pretty interesting.

But the movie also brings in Phillip Carlyle (Efron) and Anne Wheeler (Zendaya), two completely made-up characters, to have a subplot about interracial relationships — one that awkwardly avoids the topic of the impending Civil War — and give the movie an option to upstage the freaks with characters that viewers would rather look at.

The Greatest Showman only ever amounts to a shadow of what it could have been, a vague mock-up of a movie I might have really enjoyed. It’s a real shame this script was so lazily performed.

Post-Weinstein blunder: On tour, Lind throws herself at Barnum, then when he turns her down, dupes him into kissing her onstage and then leaves the tour early, crippling Barnum in the pocketbook and the homestead. The plotline is completely made up and incredibly ugly.