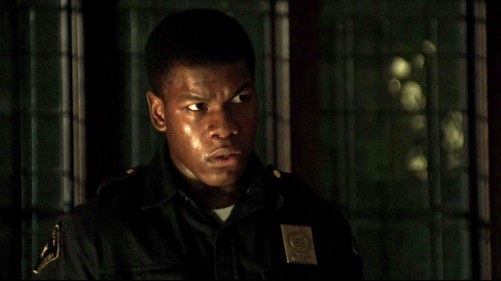 6/10 Both delving into the past and ripped from the headlines, Detroit explores America’s explosive racial divide. But like so much mass media that addresses these issues, it shies away at some troubling moments.

The film dramatizes the Algiers Motel incident during Motor City’s 1967 race riot, in which 10 black men and two white women were found together in the hotel and severely beaten and humiliated by police, three of them killed. While guarding the Great Lakes Mutual Life Insurance building from looters, police officers and national guardsmen said they heard shooting coming from the hotel annex building one block to the south. Storming the building, they found the guests and demanded to know who was shooting at them.

The officers lined the guests up against a first floor wall and then isolated and coercively interrogated them, threatening to kill them if they did not reveal the shooter. The women were stripped naked and called nigger lovers. Officers set knives on the floor and told guests to pick them up so they could be killed. They would take individuals into separate rooms and pretend to kill them in order to frighten the other guests into talking.

Eventually, one of the guests claimed that Carl Cooper (Jason Mitchell), who had been killed as law enforcement was entering the building, was playing with a starter pistol and had fired the shots they heard. No starter pistol was ever found. Two policemen confessed to killing one of the teens, but those confessions were thrown out because they had not been read their Miranda Rights. They, another policeman and local security guard Melvin Dismukes (John Boyega) were all found not guilty in the incident. Dismukes, who is black, serves as the more-or-less main character in the film. He tries to keep the peace, but finds that he can only facilitate the violence.

Director Kathryn Bigelow, who also produces, has a bit of a thing for handheld shots, and in Detroit it gets really annoying really quickly. The camera dips and dives and bobs and weaves and nauseates an audience it should be entertaining and obfuscates the drama it should be revealing.

After seminal action films like The Bourne Identity and found footage horror popularized the tripod-free look, it’s become a crutch for directors who don’t know how else to make their frame interesting, a scarlet letter of incompetence right up there with the old, “camera floats listlessly to the left.”

Bigelow, of course, is not incompetent at all. She’s one of the most decorated filmmakers in history and far-and-away the most decorated female one, known primarily these days for her genre-redefining war film The Hurt Locker and its follow-up, Zero Dark Thirty. The constant camera movement in Detroit isn’t meant as a cheap shortcut to make the frame interesting, it’s meant to express the unpredictability of the situation. Unfortunately, it ends up being a cheap shortcut for doing that.

There are a ton of better movies that capture unpredictability — Birdman is the go-to example of a movie that was shot specifically around that feeling, but basically any decent movie is going to achieve this indirectly. It can be as overt as the twists of a good crime thriller or as simple as the sudden camera sweeps in a Wes Anderson comedy, but almost any good movie is going to keep the audience guessing somehow or another. It doesn’t need to be a big, atmosphere-defining decision.

This is Bigelow’s third straight go working with writer/producer Mark Boal, who wrote The Hurt Locker based on his 2005 Playboy article, “The Man in the Bomb Suit.” But for a movie written by a journalist who apparently hired his own personal task force from the Detroit Free Press to research it, Detroit has a lot of curious inaccuracies, even looking only at what is known for certain about the incident, which is still shrouded in mystery — and most of them are meant to defend the police officers. The movie shows Cooper firing the starter pistol, which may never have existed. The two officers who would be charged with murder, played by Jack Reynor and Ben O’Toole, had their names changed in the script to avoid implicating them in crimes they were acquitted for but almost certainly committed — same goes for their lawyer, played by John Krasinski, to avoid implicating him for doing his job as a defense attorney, I guess.

The main villain, officer Philip Krauss (Will Poulter), is mostly fictional. Not only is he made up, but he’s made up to be a walking nightmare of everything wrong with police procedure as it applies to race relations — he’s shown to have shot a black man dead that very day, not reported it to the department, then sent right back into the streets despite the detective saying he’ll pursue murder charges.

The most important fact to me, though, is humiliation of the women. They seem to be the key to what was really going on in that motel — nothing undermines white supremacy like white women fucking black men — but their assault is minimized. Only one is stripped, and that’s portrayed as an accident. Most of the explicitly sexual aggression is directed at Vietnam veteran Robert Greene (Anthony Mackie), who is accused of being their pimp.

Talking to Vulture, Boal addressed how he handled the movie’s disputed history-

“There is, of course, a lot that is unknown or disputed, and in those cases, I employed poetic license, under a self-imposed rule to never stray from what I understood to be the underlying truth of a scene or an event.”

So is this story really all that vital to tell? It’s mostly made-up, but the true story is just as ripped-from-the-headlines as this fictionalized one. That’s the real point here, that this movie is being released 40 years to the day after the incident and this type shit is still an everyday risk for black Americans.

I don’t mind when reality encroaches on the theater, but I have to wonder if a movie was really the best way to tell this story. What was this movie going to do to be a stronger call for changes in race-relations then the riots and police killings happening right now? At what point of fictionalization does this go from a true story that needs to be told to opportunism from a team of five white producers?

Boal is a journalist, and for most of history one of the charges of journalists has been to give voice to the voiceless, which Detroit sort of does. But in the age of Twitter, where no one is truly voiceless, that’s changed. Now, we are charged to pass the mic.