Late-summer catch up — ‘A Ghost Story’ 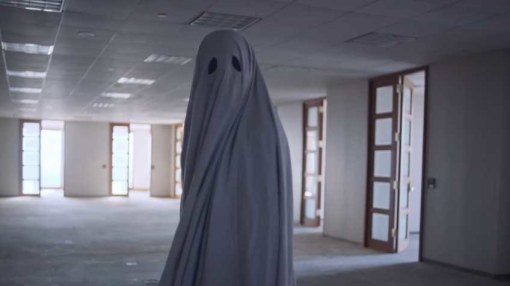 A Ghost Story manages to make its central costume thick and romantic and not silly. Image courtesy A24.

5/10 A Ghost Story is 92 minutes long, and about 20 of those minutes are spent on one shot of Rooney Mara stress-eat pie.

M (Mara) and her husband, C (Casey Affleck), are preparing to move out of their suburban home into the city when C is killed in a car accident just outside their driveway. After his cadaver is confirmed, C rises up and begins to stalk the morgue covered in his death shroud. Knowing his wife likes to leave notes in places she’s lived, the ghost returns home to watch her grieve, then recover her written message to their home.

A Ghost Story is shot methodically and filled with long stretches of time in which not much happens. The movie is composed of long shots with a ton of extra compositional space, the kind of shots directors use when they don’t really know what’s going to happen. Mara and Affleck are given a ton of control over their own performances, and that can be a good thing, but not for a movie with a script this thin. Mara and Affleck are asked to carry a movie without saying or doing anything, and Affleck also has a sheet over his face the entire time. This isn’t a case of the actors having great ideas that change the shape of the film, it’s a case of writer/director Dave Lowery essentially passing buck creatively.

A Ghost Story is so abstract and minimal that it’s tough to say what it’s about, and I can’t really say a movie fails when I don’t know what it’s trying to do in the first place, but I can say that this is one of those movies that only has as much meaning as you put into it. A more conventional movie, one with dialogue and a satisfactory runtime and characters that have real names, will always have at least some degree of meaning woven into the plot and creative choices. This one doesn’t. It’s open to interpretation to the point that there’s barely any meaning inherent in the film, and any epiphany you may get from it was something you probably brought into the theater with you.

The advertising campaign has made a huge push to frame the movie as being about time’s unfaltering march. This is pretty much the only meaning the movie explicitly has, and it’s tacked on late in the film when some guy (Will Oldham) goes on an extended monologue about humanity’s insignificance on a cosmic scale, the kind of screed that a philosophy freshman thinks is so profound everyone in the world needs to hear it, but really only amounts to baby’s first encounter with nihilism. Lowery has said in interviews that he meant for the story to be about attachment to physical spaces. That’s a huge part of my life, and I don’t think A Ghost Story captures it at all.

There are a lot of good things about A Ghost Story — it’s great to see a movie this abstract, you really could have a profound emotional experience seeing it and it’s a banner member of this summer’s parade of arthouse films getting more attention than usual — but it’s philosophically juvenile and creatively barren.