Cars, along with its numerous sequels and spinoffs, occupy an odd place in the studio’s hierarchy. Though they are, to a movie, the studio’s worst work, mid-’00s children took to them in a way that they didn’t to The Incredibles or Monsters Inc, and bought toys in droves. Between Cars and Cars 2, Pixar released four films — Ratatouille, Wall-E, Up and Toy Story 3, all much better received at the time and much better remembered now. They combined to make almost $3 billion worldwide, very impressive for four movies.

During that time span, Cars merchandise brought in $10 billion.

Disney has no shortage of ways to pay the bills, but Cars lunchboxes and video games are some of the most important. So while people who care more about movies than numbers may roll their eyes at a fifth installment in a franchise that was never really popular, Cars 3 is something that always should have been expected.

What never could have been expected, however, was the franchise taking a sharp left turn and producing such an incredible film.

Lightning McQueen (Owen Wilson), now a respected veteran of the track, is having a spectacular season, but his crown is taken by Jackson Storm (Armie Hammer), a techy supercar with a sinister paint job who leads of new wave of carbon fiber racers who use aerodynamics, weather reports and simulations to calculate success. Older racers start being traded out for newer models by the dozen, and McQueen fights so hard to get back on top that he blows a tire and rolls himself in the season’s final race. The red corvette must find a way to compete with the cutting-edge racecars or be forced to retire on someone else’s terms. 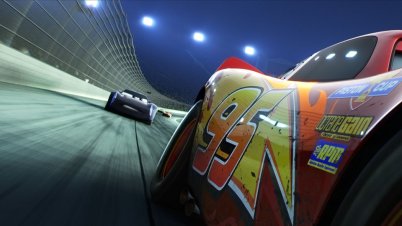 Cars 3 makes heavy use of shots like this, in which the camera seems to be fixed to the car the way one would be in a live-action production. They bring the audience low into the action, giving a startling realism and intensity to the film’s race scenes.

This first act takes place over one razor sharp 15-minute opening sequence, by far Cars 3’s best leg. From the first moments, it establishes this as a much more ambitious and thoughtful film than the franchise’s previous offerings, something more in line with Pixar’s greats.

This is the proper way to make a fast — and I mean fast! — paced movie. It couldn’t possibly hope to maintain the blitz of the first sequence, which covers an entire year, but continues to cover scenes from a bird’s-eye view, narrowing ever so slowly to spend more and more time in one space as it goes on. Scenes flow into one another like butter, making the whole movie feel like one long series of events.

Just as Toy Story 3 was meant to be a release of childhood nostalgia as the people who grew up with it headed to college, Cars 3 will release to fans of the original in their mid teens. It’s aggressive on that point as McQueen goes to new locations — at one point literally called “college” — and makes new friends, but oddly, the movie seems to have more sympathy with a much older crowd.

The film takes a distinct anti-technology stance, with McQueen looking down on the technology and data that is helping the new racers and explicitly stating several times that he doesn’t use a phone. It paints McQueen as an older professional refusing to adapt to new methods and draws direct parallels to the debates over advanced metrics in baseball and other major sports.

McQueen is paired with a personal trainer, Cruz Ramirez (Cristela Alonzo), who’s knowledge of racing comes exclusively through numbers — McQueen quickly discovers she’s never even been on sand before, and ends up spending more time training her. Over its runtime, Cars 3 becomes less about getting McQueen back up to speed and more about this conflict between experience and data.

With mature philosophical conflict and an inspired structure, Cars 3 will do much more than sell lunchboxes. It is a satisfying, worthwhile movie.

This entry was posted in Entropy and tagged #Disney, #disney pixar, #pixar, #up, #wall-e, Cars, Cars 3, Ratatouille, The Incredibles 2, Toy Story 3, You think God is in control here?. Bookmark the permalink.