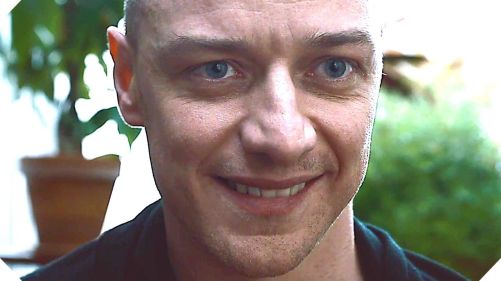 Split leans heavily on this type of invasive close-up even outside of its primary basement environment. Image courtesy Universal Pictures.

Split is a sharp, tight movie about a trapped girl and her insane captor, except when it isn’t.

The movie starts with social outcast Casey Cook (Anya Taylor-Joy) forced to ride home with two of her much more well-adjusted classmates, Claire Benoit (Haley Lu Richardson) and Marcia (Jessica Sula). The three are kidnapped by Kevin Wendell Crumb (James McAvoy), who suffers from dissociative identity disorder and who’s body is inhabited by more than 20 different people. From Crumb’s several identities, the girls learn they must escape his underground lair before being sacrificed to a final, cannibalistic personality known only as “The Beast.” Also, Crumb sees a psychologist, Karen Fletcher (Betty Buckley), and the movie halts all its momentum at several points so we can get her two cents.

It seems like every year there’s a long list of movies that are such bad ideas on paper you have to wonder why they were ever greenlit in the first place. Split is the opposite of those movies. You take writer/director/producer M. Night Shyamalan, an extremely competent director if a questionable storyteller, and give him two fantastic actors in McAvoy and Taylor-Joy. They’re locked in a basement, and one of them is nuts. It’s tough to mess up that great of a recipe, and Split delivers on its promise.

Shyamalan has always been a fan of long takes, and in Split, he focuses on extreme close-ups, often cutting off the top of his actors’ heads. It’s the perfect environment to showcase talented actors, and that’s just what this movie does.

High-level actors’ methods of getting into character vary greatly, and Crumb is a role that calls for an actor who can do it well, quickly and frequently. The role demands creating and inhabiting almost a dozen characters in quick succession, all of whom must be distinctive enough that the audience can differentiate them despite their similar appearance and charismatic enough to hold the screen. McAvoy shines as one of a small handful of actors fundamentally strong enough to deliver here. Viewers are never made to wonder which side of Crumb they’re dealing with and never bored with any of them.

Taylor-Joy broke through almost a year ago now as the lead in Sundance horror hit The Witch. She isn’t yet drinking age, but she’s already demonstrated a mastery over expression work and building a character with minimal dialogue.

Then, too frequently, the scene will shift to Fletcher, and she’ll deliver a short seminar on Crumb’s condition. Her several scenes with Crumb are just fine and service the story, but her other scenes are worthless. The boring, minutes-long segments in which she expounds on DID — or at least, the movie’s version of it — and speculates wildly in the exact, highly unlikely direction the plot is headed add nothing to the film and should have been cut.

Split is a movie with a lot on its mind about predation and the difference between being a victim and being a survivor. It’s good for a movie to tackle big concepts, but some of its conclusions are highly problematic.

Split’s interpretation of DID is mostly accurate — it’s based on real phenomena people with DID display, and the exaggerations are well within acceptable movie boundaries. That said, it does essentially elevate the disorder to a superpower. It’s not quite romanticized, as Crumb clearly suffers from his condition, but this is still a morally treacherous way to portray mental illness.

More broadly, Split makes the express point of turning childhood trauma into an empowering thing. Crumb and Cook were both raised by abusive parents. Crumb’s abuse triggered his DID, which makes him bulletproof by the end of the movie, and the movie says in as many words that Cook’s past trauma is what gives her the strength to fight him. This is romanticized, and that’s a problem.

When it’s not cutting to a useless character, glorifying parental abuse and resultant psychological conditions or trying to establish the M. Night Shyamalan Cinematic Universe, Split is a fun, tense, well-shot and well-acted movie. Enjoy for the most part, and check your phone whenever Fletcher pops up.