Give him a chance!

You can’t judge until you’ve seen the movie!

He won an Oscar, for Pete’s sake!

People were upset about Heath Ledger’s casting, too!

I’ve been hearing things like this for more than a year now. This weeks’ upcoming Suicide Squad recasts Jared Leto as the Joker. It will be the character’s first onscreen portrayal since Heath Ledger’s instantly iconic turn in The Dark Knight, still the most recent good movie DC has made. Many are awaiting the movie with appropriate apprehension, but just as many are determined to be optimistic, particularly about this performance. Optimism isn’t wrong, and it is important to give movies a fair shake in spite of whatever history they may have, but that last statement really bothers me. People were upset about Heath Ledger’s casting, too. That’s true, but it’s not even half the story. A few days before the movie itself hits theaters, let’s take a moment to honestly compare the life cycles of The Dark Knight and Suicide Squad.

Batman Begins announced in its final minutes it would have a sequel featuring the Joker, and while rumors were immediately aflutter as to who would be cast, this was before The Avengers, before comic book movies were the be-all end-all for film studios’ profit margins. There was actually other news to report on. Paul Bettany, Steve Carell and Robin Williams’ names were all bandied about, but the group eventually settled on Ledger, who series director Christopher Nolan had wanted to work with for a long time and actually approached for the Batman role, and there were many cries of, “Really? The gay cowboy?”

Fast-forward a few years, and DC was under extreme pressure from Marvel’s success. It had wanted a cinematic universe to spawn from Green Lantern in 2011, but cancelled sequels set in that universe after its critical and commercial collapse. They’d announced Man of Steel would kick off a cinematic universe if successful months ahead of its release, and despite being reduced to jokes about how many buildings Superman could destroy and several other serious criticisms, it had a big opening weekend because it had Superman in it, so they went forward.

In October 2014, more than a year after Man of Steel’s June 2013 release, Warner Bros. announced nine sequels, Suicide Squad one of the first among them. The pressure had only mounted — in that time period, Marvel had released Thor: The Dark World, Captain America: The Winter Soldier and Guardians of the Galaxy, which combined for more than $2 billion worldwide. In December, it was announced that, as a second choice to Ryan Gosling, recent Oscar-winner Jared Leto had been cast as the Joker.

In May 2007, 14 months before The Dark Knight’s release, the first images dropped of the Heath Ledger Joker, and everyone was in awe.

It was an ugly, low-angle selfie with caked-on makeup and a Glasgow smile, a grotesque true-crime adaptation of the idea that the Joker is stuck with a permanent grin. All doubts were allayed in an instant. This Joker fit perfectly with the bleak tone of urban decay set by the adulated movie it was following up, and from this point forward, especially combined with Nolan’s constant stories about how this whole adventure was Ledger’s idea, everyone was completely on board.

In April 2015, 15 months before Suicide Squad’s release, we got our first clear look at the Jared Leto Joker, and it came with the prompt promise that he wouldn’t actually look like that in the final product. 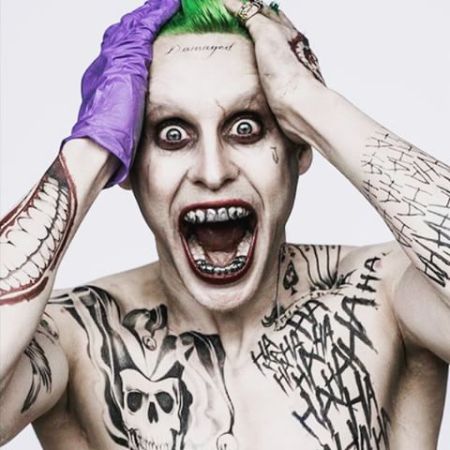 Backlash was immediate and merciless. It perfectly fit the tone of a movie that nobody really liked, and was yet another point of ridicule for Warner Bros. after the announcements of Batfleck and Lex Jewthor.

In December 2007, eight months ahead of the release, the first trailer dropped for The Dark Knight, and was like everything was in slow motion. Everyone was even more wowed and amped for this movie.

In July 2015, more than a year ahead of the release of Suicide Squad, the first trailer was “leaked” from comic con, and its tonal inconsistency was met with just as mixed a reaction as the first Joker images.

Since the trailer drop, it’s been pretty much all about Leto’s Joker. Every time writer/director David Ayer is interviewed and praises the performance it’s news, as if he’d ever say anything else. There were the stories about the reshoots, but those were mostly spun positively or hidden in stories about Star Wars: Rogue One’s reshoots, which came out around the same time.

Of note are the stories that have come out about Leto’s behavior on-set, the fact that he was in-character the entire time and sent his castmates morbid, disgusting gifts. Viola Davis said she almost pepper sprayed him, and that’s being spun as a positive, as a tribute to his thorough acting. Method acting has been fetishized over the past several years, but at a certain point you need to be professional and just be able to act when the director tells you to without threatening to kill your coworkers.

Ledger’s intense character regimen and death recently after shooting The Dark Knight threatens to be a counter-example, but where people are saying they genuinely feared Leto for his antics, the stories coming out of that movie are all about Ledger’s superior professionalism and grace, even in that particular role.

This isn’t to say all opinions are or were uniform going into the movies, and Suicide Squad is awaited enough that it’s looking at an opening weekend within a shout of The Dark Knight’s $158.4 million debut. Ledger’s untimely death in January 2008 also plays into how his performance is viewed in a big way. But to say that both of these casting decisions were met with protest, while true, is intellectually dishonest, and having the record straight on that is just as important a factor in giving this movie a fair shake as optimism is.