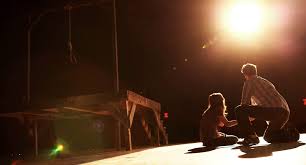 The Gallows also relies on a lot of the same stage-magic gimmicks with people moving like ninjas in long shots to scare viewers, but they do a lot of cheating with the hangman ghost flickering in and out with static. It’s a shortcut, but it’s at least a little kind of impressive how steady the camera is for these shots. Photos courtesy Warner Bros. Pictures.

The Gallows is generic found-footage horror, but in the end it’s quite a likable addition to the endlessly self-replicating subgenre.

The film opens with the original 1993 Beatrice High School production of “The Gallows,” which ends tragically when Charlie Grimille (Jesse Cross), playing the lead after another player backed out, is accidentally hanged for real. The film then cuts to 2013, in which a morbid 20th anniversary showing is being put on starring Reese Houser (Reese Mishler), a football star and hopelessly poor actor only doing it to impress the female lead, Pfeifer Ross (Pfeifer Brown). When they discover a backstage door that doesn’t lock, cameraman and fellow football star Ryan Shoos (Ryan Shoos) convinces his girlfriend, Cassidy Spilker (Cassidy Gifford), and Houser to sneak in and take down the set so that Houser can get more time to practice his lines without disappointing Ross, but the obviously haunted school is obviously haunted, and obvious haunting shenanigans ensue.

The set design in this movie is absolutely fantastic. There are nooses everywhere in this school, whether or not they are actual nooses. The best example is one of the first, when the gang is trapped backstage and being lead down a dark hall to a plot point. Their light can’t pierce all the way down the hall, and as they walk slowly forward, a power tube running straight down the ceiling is the only prominent shape in the frame. The light catches on a break in the tube, giving the entire thing the appearance of a dimly lit noose awaiting the group in the distance for a split second.

There’s little bits like that everywhere. A lot of the time it’s just shapes and clever shots, sometimes it’s rope left lying around, sometimes it’s the faint sound of a freshly used gallows creaking as the body swings. The Gallows does this traditional horror trick of using the background to make its terror pervasive, but that’s something no found footage movie that came before has accomplished to anywhere near this degree. Perhaps because of this newfangled attention to background detail and effort put into the set, there’s significantly less shaky cam work in this movie, which is a huge plus.

Many sequences are bathed in a blood lighting by exit signs, increasing the visual pressure of the movie.

There are still a lot of pits it falls into. Outside of the tastefully eliminated pretend-you-have-Parkinson’s scares, they pull pretty much every other trick in the book with no more grace or subtlety than the movies that wrote those books. Panning wide across an open area? Yeah, there’s gonna be something in the original place when you pan back. Are all those characters introduced in the opening exposition going to be shoed into the second act? Of course. Are the creep-tacular villains ignoring the camera when you pan away going to be looking dead at it when you pan back and gone completely when you pan back a third time? You betcha.

Another of this movie’s sins are the use of multiple cameras stitched together to tell a story, despite ostensibly the whole thing just being police footage and that not being plausible. This both breaks verisimilitude and makes the film much weaker — the scariest thing about Paranormal Activity is you never really know what’s going on, and that could be the scariest thing about any number of its followers if the producers didn’t have a hardon for ham-handed exposition. 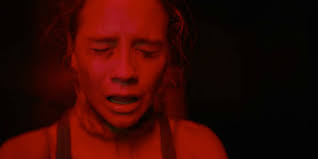 A classic film noir plot, just also with two completely useless stooges who serve only to be killed off.

The Gallows carries a big plot twist at the end, the kind of Shayamalan-esque plot twist that changes your perception of the entire movie. There’s no real way to partially spoil this twist, as a big part of its effectiveness is that viewers aren’t expecting a twist at all, so if you’ve read this far, it’s already kind-of ruined.

It turns out Ross is Grimille’s daughter and Houser is the son of the jock who backed out at the last second, consigning Grimille to his fate. The goal of the haunting is to similarly claim Houser’s life.

This revelation turns the whole thing into a bit of a neo-noir plot, with a femme fatale, a morally ambiguous main character who is compelled toward a destiny he cannot escape and overarching themes about the sins of the father, as well as themes of theater nerds rising up and revenging themselves on the jocks as the stage and its ghost come alive to punish the football stars and Shoos’ girlfriend, a blonde bombshell and real you-can’t-sit-with-us type. Everybody loves a film noir, and The Gallows gets big points by leaving that taste in your mouth.

It would have been nice to see some more old noir motifs to add to this — some smoke, for instance — but a lot of the movie, while obviously not black and white, is bichromatic, either with the blood red lights mentioned above or the green of Shoos’ phone’s night vision app. It adds a lot to the movie’s already surprisingly rich visuals. As film is a primarily visual medium, this earns more points than the genericism loses.

Since we’re spoiling things, we should mention — they have a weird five-minute part at the end where police invade Ross’s house, which is unnecessary and unfortunate and cheapens the movie by showing Grimille’s ghost outside the stage he died on. I don’t know why they did that, but it does sour the film’s twist-enhanced aftertaste. Let’s all just agree to live in a world where this movie is five minutes shorter.

Leopold Knopp is a formerly professional film critic, licensed massage therapist and journalism student at the University of North Texas. 55 is just too young. I’ve had a change of heart about reader input. It is now welcomed and encouraged. Like Reel Entropy on Facebook, follow it on Twitter @reelentropy, and shoot questions to reelentropy@gmail.com.

This entry was posted in Entropy and tagged #blumhouse, #don't say his name, #found footage, #macbeth, #the gallows, Paranormal activity. Bookmark the permalink.