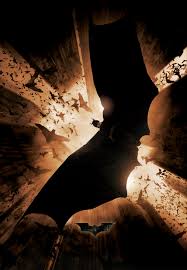 Batman Begins is 10 years old today. Take a moment and let that sink in.

Batman Begins is simultaneously the extraneous sequel that was always going to get made and the crazy wet dream movie that should never have been produced. Before the modern era of mass-produced superhero movies, Batman was the second guy through the wall in 1989, behind the 1970s Superman movies. The first movie, an extraordinarily Tim Burton film, was followed by three sequels between ’89 and 1997, each one more Tim Burton than the last, despite Burton himself leaving the franchise after the second installment. This movie series coincided with a meteoric rise in Batman’s popularity outside of comic strips, with the acclaimed and instantly iconic Batman: The Animated Series TV show running 1992-95. The series was so popular, production was rebooted for two more years from 1997-99, and it gave rise to the just as acclaimed Superman: The Animated Series, Batman Beyond and Justice League TV shows.

The fourth film, Batman & Robin, is still considered the worst superhero movie ever made by a wide margin, and despite taking in $238 million, Warner Bros. nixed the next movie in the series, Batman Triumphant, and took it back to the drawing board. Thus began several years of rejected proposals by filmmakers such as Darren Aronofsky and Joss Whedon before Warner Bros. realized what they wanted and hired Christopher Nolan and David Goyer to write the script.

The film threw out everything from the earlier Batman movies and started with a completely fresh take on the character and his environment. There was an all-star cast that included living legends Gary Oldman and Michael Caine, there was a director coming off of breakthrough hit psychological thrillers Memento and Insomnia — Where the series of movies had descended into camp that would make Adam West blush, this reboot was being treated like an actual movie that was expected to be well-received and remembered beyond its theatrical run, instead of just a cashgrab.

It was a revolutionary idea at the time that has been taken in the wrong direction at every turn since then, and the movie itself has not aged well.

You really shouldn’t, as it inspired several much better movies. The Dark Knight series, like much of Nolan’s filmography, is a bloated, incredibly overrated mess propped up by one movie that lives up to the hype, and that movie is not Batman Begins. The Dark Knight Rises was awful and people who were paying attention recognized that at the time, but Batman Begins was critically lauded, and only looks bad in hindsight after a decade of Marvel movies perfecting the realism and character drama it was trying for — and then descending back into campy CGI romps.

In retrospect, Batman Begins does not achieve the tone it was going for relative to other movies that did reach it like Casino Royale and Iron Man. Batman Begins has much more in common with the reviled Joel Schumacher movies it was trying to reject than the movies that took its concepts all the way to the finish.

It was the first franchise film to completely reject previous movies in the series and start fresh. James Bond, Spiderman, Superman and now Spiderman again quickly followed suit, one to a much greater degree of success than the others. Batman Begins set a major precedent here of a way for studios to listen to unsatisfied viewers while still milking their cash cow. Batman & Robin, Spider-man 3, The Amazing Spider-man 2, Superman Returns and Die Another Day all turned profits, but were all disappointing to their studios and all received luke-warm critical response at best. Batman Begins showed studios that shaking up the creative team and starting fresh can and normally does work — even if the remake is bad, excitement for the new direction will fill theaters.

It was one of the first major blockbusters handed over to a director known for Indie success. Nolan was not a bankable name at the time, and neither was Aronofsky or Whedon when they were interviewing for the job. The pattern of going for mysterious, largely unknown directors has picked up in recent years with Gareth Edwards directing Godzilla on the strength of his tiny but very good 2010 movie Monsters, and Jurassic World director Colin Trevorrow got the gig based on 2012 Sundance hit Safety Not Guaranteed.

Maybe the most important legacy of Batman Begins — and this is just as much The Dark Knight’s legacy as well — is it cemented in the minds of DC that Christopher Nolan was Jesus and they should just give him the wheel. The Nolan/Bale series isn’t related to the Justice League universe they’re starting, but he penned and produced Man of Steel and his fingerprints are all over it. That movie, as well as The Dark Knight Rises, were largely trying to imitate The Dark Knight, the filmmakers somehow not realizing how impossible that movie is to replicate. The general assumption is we’re in for a half-decade of moody, destruction-heavy, rainy movies out of DC. Batman Begins quickly lost what was unique about it to movies that did it better, but it deserves more than to be the granddaddy of a series that is viewed entirely with the opposite of excitement.