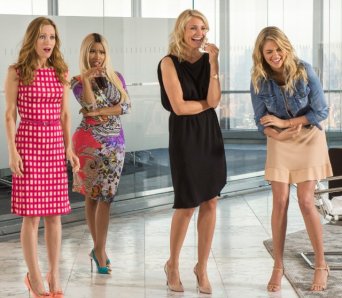 The movie follows Carly Whitten (Cameron Diaz), the main character, Kate King (Leslie Mann), the dumb one of the group, and Amber (Kate Upton), the other dumb one of the group, as they avenge themselves on Kate’s husband, Mark (Nikolaj Coster-Waldau), who had been sleeping with all of them and others. This starts about an hour and a half in — there’s a lot of bonding first.

The film is a Lifetime movie with a bigger distribution. It’s the kind of movie that pulls models and rappers for major roles instead of real actors. It’s extremely skewed toward women, one of those movies  that assumes the target demographic doesn’t know anything about movies, so it ends up being a montage of actors from the demographic being vaguely stupid on camera.

The comedy is a parade of poop jokes, slapstick and Kate King and Amber being offensively stupid for comedic effect. The lone bright spot is Coster-Waldau, who is so polite and earnest he actually could be sleeping with three women.

The Other Woman is nothing surprising (and nothing you couldn’t find endless copies of on basic cable), but it is a sad look into the paradigm of women in film. Even with three in lead roles, the movie doesn’t pass the Bechdel Test.

You know what, I’d be just fine sharing this guy. Would not be a problem.

The degree to which the main characters are dependent on their beaux is staggering. Over the course of the film, Whitten: talks at length with her assistant (Niki Minaj, somehow) and father (Don Johnson) about, what else, men; seemingly drops the important case she was given at the beginning of the film because she’s too busy chasing King around the world — it’s used for informed character development and never mentioned again; corrals the stupid ones in their King-centered quest for revenge; and falls in love with someone entirely unrelated because she has to end up with someone or she just wouldn’t be happy.

Kate King: is very stupid, repeatedly mentions giving up her entire life for her husband and, subsequently, allows revenge on him to become her entire life.

Amber: is very stupid and also finds another boyfriend because happy endings. There’s really no activity that doesn’t revolve around Mark King or another man.

It’s not funny, it’s not new and it’s not going to change ever. Don’t waste time on this. Ugh.

Joshua Knopp is a formerly professional film critic, licensed massage therapist, journalism and film student at the University of North Texas and a senior staff writer for the NT Daily. Sorry for skipping Transcendence but STANLEY CUP PLAYOFFS.  For questions, rebuttals and further guidance about cinema, you can reach him at reelentropy@gmail.com. At this point, I’d like to remind you that you shouldn’t actually go to movies and form your own opinions. That’s what I’m here for.