That Awkward Moment when you realize how racist this movie is

Posted on February 2, 2014 by reelentropy 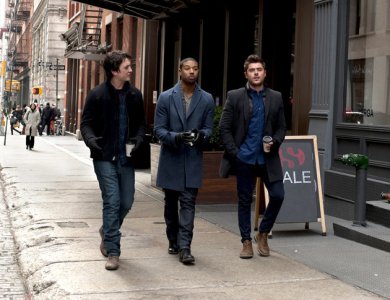 It opens opposite Labor Day, a calculated, over-produced romantic drama based on a 2009 novel. And lo, the executives decreed there shall be nothing genuine or original this weekend at the movies.

That Awkward Moment follows Jason (Zac Efron), Mikey (Michael B. Jordan) and Daniel (Miles Teller) through their women-chasing life in New York City. Mikey finds out his wife as skipped the middle man and is cheating on him with the divorce lawyer early in the film, and Jason and Daniel pledge to stay single until Mikey is able to love someone else. All three of them immediately break their pledges, with Jason and Daniel falling hard for Ellie (Imogen Poots) and Chelsea (Mackenzie Davis) while Mikey tries to make things work with his wife, Vera (Jessica Lucas), despite saying that he wouldn’t.

Yes. Very. That Awkward Moment is actually a very fun movie to watch. A lot of romance movies feature a ton of the main character talking to his or her friends about their feelings and maybe only one magical night with the person they end up with. It probably has more meaning for people having relationship troubles while they’re watching, but the audience doesn’t really get the experience of falling in love with the characters.

That Awkward Moment features that part broadly. It’s almost a full-on montage of romantic moments, and it’s easy for the audience to lose themselves in the characters’ love affairs. It’s got a lot of charm. 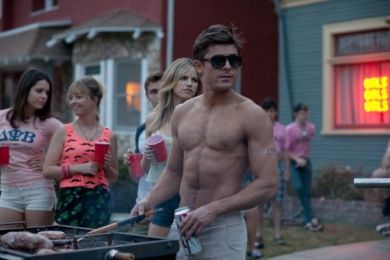 This picture is from an entirely different distributor, Universal Pictures, for a completely different movie, Neighbors. And I do not care.

Will I get to see anyone naked?

Quite a bit, actually. There are only three black characters in the movie, and one is the only member of the main cast who ends up single because the black lady is cheating on him with the other black man. They get some points back because one is a doctor and the other two are lawyers, but damn it, this movie isn’t about your professional licenses, it’s about being in love, and all the black people are really bad at it.

It’s hard to tell what comes with the territory and what is a genuinely misogynist conceit of writer/director Tom Gormican. The male characters are stereotypical pigs, who keep “rosters” of women they regularly have sex with and then dump at the first sign of any responsibility. The women, stereotypically, just want one of them to settle down with them. It’s well disguised, but looking past the charm and individuality the actors bring to their characters (and they all really do a good job of that), it’s just the same old story about men who want to plug everything in sight and women who want to be the only one their man plugs.

Where it gets really sexist is how the women treat the dynamic. Chelsea, Alana (Timlin) and seemingly Ellie are quite complacent with it, with Chelsea telling Daniel in as many words that she’s OK if he doesn’t want to settle down even though that’s what she obviously wants him to do. She’s even responsible for getting him laid earlier in the film — not responsible as in having done it, responsible as in being expected to do it and punished if she doesn’t. Men are actors, women are objects. It’s not pretty.

This situation is kind of reversed with Mikey and Vera, but they’re obviously completely different because they’re black. 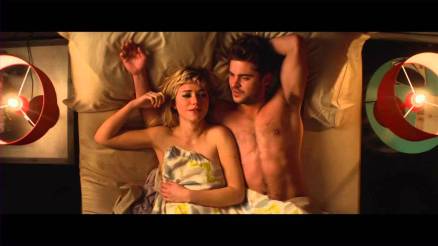 Guess who’s in control of this situation. Go ahead, guess.

Is it more entertaining than a football game?

About on par. Honestly, enjoying That Awkward Moment depends, like so many other over-produced offerings, on how much attention you really want to pay and how much you want out of a movie. If you want to sit, relax and watch pretty men and pretty women dance around the topic of whether or not they have feelings for each other for a couple of hours, this is the movie for you. If you’re more advanced as a moviegoer, well, this is charming enough to become a guilty pleasure if you’re into that sort of thing, but there’ll always be that nagging flaw that makes it worse and worse every time you watch it. For me, it’s the racism.

Is it more entertaining than the talking heads?

Oh God yes. Even baseball is more entertaining than the talking heads. I don’t know what it is with Americans and boring sports, football is really just a slower, simpler version of rugby. You people should watch more hockey.

Is it more entertaining than the commercials?

No. Not by any stretch of the imagination.

Joshua Knopp is a formerly professional film critic, licensed massage therapist, journalism and film student at the University of North Texas and a senior staff writer for the NT Daily. To Jesse Eisenberg’s credit, he’d probably make a better Batman than Ben Affleck.  For questions, rebuttals and further guidance about cinema, you can reach him at reelentropy@gmail.com. At this point, I’d like to remind you that you shouldn’t actually go to movies and form your own opinions. That’s what I’m here for.