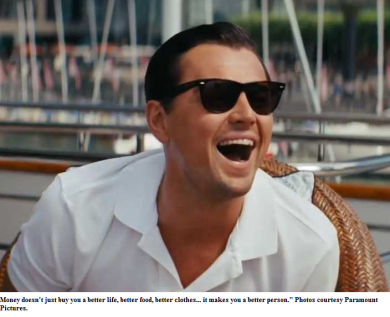 At the end of The Wolf of Wall Street, Jordan Belfort (Leonardo DiCaprio) finally gets his rape scene.

As far as violent crimes go, it’s a pretty tame sequence. After explaining to his wife that the FBI offered him a deal and he’ll only have to spend three or four years in prison, Belfort pulls her close and kisses her, saying, “Come on baby, we haven’t made love in so long.”

Naomi (Margot Robbie) pulls away, disgusted. A jump cut later, she’s decided to just put up with it until he finishes.

But she’s not helpless. After Belfort is done, Naomi informs him that she’s divorcing him and will almost certainly get custody of their two children, taking control right back.

It’s important to note how equal Naomi’s revenge is. Rape isn’t an issue of sex, it’s an issue of control. It’s having so much power over another person that they can’t even keep you out of their body, and it’s about using that power for sadistic pleasure. Anyone can jerk off without physically and emotionally scarring another human being — rape is a special kind of evil. In taking their children, Naomi is exercising her power over something even more personal. Getting her children away from a cocaine addict who must have contracted syphilis 30 times over at this point doesn’t hurt either.

Though Belfort only literally commits one rape in The Wolf of Wall Street, realistically it’s what he’s doing the entire movie. Director Martin Scorsese uses a wide variety of techniques to graphically but deftly make a simple equation: Belfort’s white collar crimes are just as violent and controlling as the rape he commits on his wife and the murder gangsters commit in more traditional crime movies.

Understanding these techniques revolves around understanding montage. The word springs up memories of Sylvester Stallone’s magic jogging routine, but the technique is more varied than that. Basically, any time a movie consistently strings together shots that don’t follow directly after each other in time and space, it’s a montage. The montage in Rocky it’s a simple time skip, but in the hands of proper filmmakers it’s a tool to tie otherwise unrelated (or slightly less related) events together. Narration or dialogue that’s taking place in a different part of the movie can add to this.

For probably the most famous example of using montage to create meaning, take a few minutes and re-watch the climax of 1972’s The Godfather. Go ahead, I’ll wait.

In this scene, Michael Corleone (Al Pacino) is becoming a literal godfather for his nephew and being the rhetorical godfather of his crime family. Though combining sounds and images that are miles and hours apart within the film, the movie weaves the actions together. One thread may be golden and the other may be onyx, but they are woven together so tightly that they are now one functional thread. There is no real distinction between the two for Corleone. Through the magic of editing, they are now the same.

Scorsese recreates this effect in The Wolf of Wall Street with a less rigid montage, but one that conforms to his traditional style. Many of his movies, when split into segments, become a cacophony of sounds and lights that are miles and hours, sometimes days, apart from each other in the diagesis. The Wolf of Wall Street uses this aesthetic extensively, adding a constant narration which develops into several more traditional fourth wall violations with DiCaprio speaking directly to the camera. Scorsese’s use of this aesthetic is so extensive that the movie is easier to comprehend as a three hour montage, featuring only a handful of scenes that aren’t impossible without jump cuts.

During a montage with Belfort teaching his new employees a sales script, Belfort sells $10,000 worth of bottom-of-the-barrel stock to a client while pantomiming fishing and preparing to have sex. His imaginary partner is in a bent over, notably submissive position. The audience hears him and others practicing the script, but what it primarily sees is his mime act.

After moving into a bigger office, Belfort’s company has a small army of hookers constantly on call. During one segment, the audience is seeing the hookers objectified and mated with1 and hearing Belfort classify them as blue chips, NASDAQs and pink sheets — the same categories into which he puts stocks.

Later in the film, he establishes an illegal arrangement with his wife’s aunt and immediately tries to have sex with her.

Belfort repeatedly tells his employees to never hang up until the client “either buys or dies.” The client must give the salesman his satisfaction or die. The movie almost wouldn’t have been complete without a straight rape scene because, at his heart, Jordan Belfort is a rapist2. Rape isn’t sex, it’s power expressed by taking someone else’s sexuality and right to their own body away. Belfort expresses power by taking other people’s money away. While he doesn’t literally rape many people, he financially rapes hundreds constantly over the course of a three-hour montage.

His on-screen actions are even broader in context. The Wolf of Wall Street is structured like the crime epics of the 1970s and ’80s and shot very similarly to Scorsese’s own Goodfellas, one of the genre’s last hurrahs. And given how the 2008 economic collapse has come to define American life over the past five years, white collar crime probably has a more tangible effect on everyday life than the drug runners in those movies.

This is the crime epic of the 21st century. Al Capone is long gone (from the U.S. at least), but the country and the entire world is still reeling from white-collar crimes such as the ones depicted in The Wolf of Wall Street, with public opinion of stock brokers and bankers lining up with the impression Belfort gives off in the movie.

He even takes the time to broaden his crimes, explaining at a couple of key points that the audience really doesn’t need to know what’s happening — just that he is getting rich and we are staying poor3. Belfort isn’t just taking control from his victims, he’s taking control from us.

Joshua Knopp is a formerly professional film critic, licensed massage therapist, journalism and film student at the University of North Texas and a senior staff writer for the NT Daily. Hello, Matt. For questions, rebuttals and further guidance about cinema, you can reach him at reelentropy@gmail.com. At this point, I’d like to remind you that you shouldn’t actually go to movies and form your own opinions. That’s what I’m here for.

1Though consensual in the sense that both partners say yes, sex with prostitutes is cloudy. Because the industry is unregulated, sex slavery is a big problem, and Johns can never really know if they’re with a mature, well-adjusted woman fallen on hard times or if they’re with someone who was taken from her parents at age 9 and is silently wishing her next mark will finally release her from a lifetime of misery. Consent is dubious at best. For the purposes of the movie, even if every hooker on screen happily plies her trade of her own free will, the scene still contributes to the power complex in the overall theme.

2The movie character, not the real-life person. Though he did defraud more than 1,500 investors for more than $200 million and has only paid a fraction of a fraction of his owed restitution as of this writing, despite continuing to profit from his experiences having written two books and sold the rights to this movie, which he has a cameo in. We wouldn’t want to say anything bad about him.

3The way Belfort made money was through a type of scam called pump and dump. He would buy shares of a worthless stock in other people’s names, and then drive the demand and price for that stock up by having his company sell that stock hard. When it was big enough, Belfort would sell all his shares for huge profits, leaving his clients holding the bag when the stock came back to Earth. These practices have almost nothing to do with the 2008 economic collapse, so his refusal to explain them in detail is kind of important. Instead of understanding that this is a separate and blatantly illegal form of corruption, the audience only gets to know that it’s complicated and unethical and it makes their wallets lighter, which is all most of us really understand about the recent collapse anyway. Keeping it vague keeps it fresh.

This entry was posted in Reel understanding. Bookmark the permalink.

1 Response to Reely understanding The Wolf of Wall Street