Revisiting ‘Contagion’ in the age of coronavirus

As the COVID-19 pandemic quietly spreads through the U.S. and the country very loudly grinds to a halt, movie theaters are one of many businesses that are shutting their doors. Amid news of delayed releases and entire theater chains closing, last weekend was the worst at the box office in 25 years, and no. 1 finisher Onward in particular suffered a second-weekend drop of more than 70%, which is almost unprecedented.

Americans didn’t go to the movies last week, and they won’t be returning for some time. But there is one movie that remains a communal experience right now, something people are watching in droves, is a nine-year-old horror movie directly related to the present crisis – Steven Soderbergh’s Contagion.

Here’s my review at the time for The Collegian, and aside from one major terminology gaff, it holds up. My main complaint is that it’s got no traditional excitement factor, and that’s completely true. There are riots, a “stay away from my daughter” moment, a kidnapping, a burglary and an arrest scene, but nothing shot for in-the-moment tension. 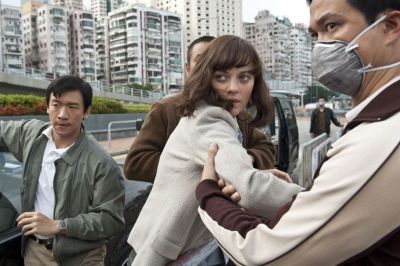 Orantes’ kidnapping, during which she irritably asks “What is going on?” and offers no other resistance as she is obviously being kidnapped, is a particular lowlight.

A lot of that is by design. Soderbergh was interested exclusively in what was realistically possible here, and he and writer Scott Z. Burns went to great lengths to research how a pandemic would play out and the specific responses from the World Health Organization and Centers for Disease Control and Prevention workers they would be showing onscreen. Cast members were also involved with the research and got to base their performances on people presently occupying their characters’ positions. This disease that’s portrayed onscreen, with a mortality rate ranging from 20-30% during the outbreak, has some pretty dramatic numbers, but isn’t out of line with what’s possible.

In hindsight, accurate documentation of theoretical possibilities is what Soderbergh and Burns are really interested in here, much more than any surface-level drama. The rest of Soderbergh’s ‘10s are highlighted by Magic Mike, which is inspired by Channing Tatum’s real day-to-day experiences as a stripper, and Unsane, which is shot entirely on an iPhone 7 Plus – both of these, and Contagion, are also brimming with Soderbergh’s favorite color, a sickening goldish yellow. Burns continued to flex his dramatized documentary muscles just last year with The Report, his directorial debut, and The Laundromat, which was another collaboration with Soderbergh.

My more specific critique of the film today is that Contagion completely lacks a view from the ground. The film spends a great deal of time with WHO epidemiologist Leonora Orantes (Marion Cotillard), CDC representative Ellis Cheever (Laurence Fishburne) and Epidemic Intelligence Service officer Erin Mears (Kate Winslet), but Mitch Emhoff (Matt Damon), who is supposed to represent the common man’s experience with this disease, is married to patient zero. He watches his wife and stepson die sudden, grisly deaths to an unknown illness within the first 10 minutes, discovers he is immune to the virus, then spends the rest of the film zealously protecting his daughter from a prior marriage – very much not an everyman experience.

The defining factor of this coronavirus outbreak on a person-to-person level, at least for me, has been the disruption of everyday life, which has been staggered, with different aspects closing and canceling at different times, making all of it more jarring, every decision an individual blow.

Every day this month, I’ve been forced to examine my place in the part of society that’s just shut down. When the major sports leagues all suspended their seasons, I’ve had to experience the tragic potential of the Stanley Cup not being awarded this year while at the same time realizing how little I’ll miss hockey. Theaters closing down is obviously a big hit for me, but the release schedule will reorganize, and everything that’s being pushed back will roll eventually. I’ll actually have a great deal of fun tracking those business decisions and a potential Hollywood slump for the next couple of years as productions potentially slow down, since there will be so many movies stocked and ready for release. The stock market, no matter how many days of news it consumes, matters little, and I don’t get to the gym often enough anyway.

But the bars and restaurants closing? Day-to-day cultural centers that give Denton and Dallas and any other place its character? That’s what’s going to make the next few weeks so foreign. Bars are where human life happens, where we mix and new ideas are born. Businesses, marriages and entire political movements have started at bars. Entire lives have been dedicated to the perfection, or at least the idiosyncratic craft, of beers and sodas and cheeses and other foodstuffs that now we don’t get to commercially consume. I will be holed up in Denton for the coming weeks, but without the gathering places and people that fill them, it won’t really be Denton. It’ll just be my apartment.

Because COVID-19 can spread before symptoms appear, and because it can run its entire course in people my age without ever showing symptoms, I’ve had to operate under the assumption of the worst-case scenario – that, on any given day, I’ll have had it for days and could be spreading it. But what change does this demand? I already wash my hands when I should, though now I’m doing it longer and being more conscious of commonly touched surfaces. I already keep a jealous distance from strangers. I already don’t see any at-risk people, or anyone at all in fact, often enough for it to be an adjustment to not see them. The only thing I’ve taken away from this is how lonely I am.

Another thing in Contagion that’s kind of a problem is the film never makes it completely clear what a prick Krumwiede is, to the point that in a straightforward reading of the movie, without taking into account the context of Alex Jones and other types, he might still be telling the truth by the end. That could have more to do with his own endless equivocation as a conspiracy theorist than the movie, though.

Emhoff’s life, by contrast, is thrown radically out of balance immediately with personal tragedy, and he doesn’t properly grieve for his wife until Contagion’s deeply affecting final scene. Realistically, he’s caught in his own little movie about grief expressed as anxiety – his daughter Jory (Anna Jacoby-Heron), in high school, quickly begins to lament the lack of connection and lost time more than the lives the disease could potentially claim, so you have some of that angst in there as well. Mitch Emhoff’s immunity means he doesn’t bother with masks, which makes him easier to pick out in crowd scenes, but also highlights that, of all the different reactions these various main characters have to the disease, none of them are fear. None of these characters’ main anxieties are that they personally might catch this disease.

As much as I miss my own experience in Contagion, I’m glad I get to see what’s there, which is mostly a palace drama at the CDC. The mundanity helps reinforce the realism, and after three and a half years of President Donald Trump, Cheever’s ethical failures do not seem as forgiveable. Conspiracy theorist Alan Krumwiede (Jude Law), who calls himself a freelance journalist and makes $4 million hawking a cure he knows is bunk, is much more reprehensible.

All movies are of their time, and horror movies especially so – Contagion itself was made in explicit response to the 2009 swine flu outbreak – but Contagion, nine years later, seems like it was made for the present moment. It’ll be a fun and vital point of comparison for the parade of pandemic horror movies that’s going to hit in about two years.

Regular readers will know this has been a much more emotionally draining year for me than usual, even before the coronavirus, and I picked a pretty rough time to try and get back in the swing of things. We’ll have reviews for Bloodshot and The Hunt out soon, but I’ve already decided I’m not going to go back through January or February movies – Birds of Prey and Invisible Man good, Dolittle bad, we’re past it. I’m going to spend the next few weeks organizing and implementing some procedure changes, and hopefully they’ll be productive.

Email or message me anytime for opinions or recommendations on streaming movies. I’ll be around. See you all on the other side.