‘Emma’ delightful, but only for moments at a time 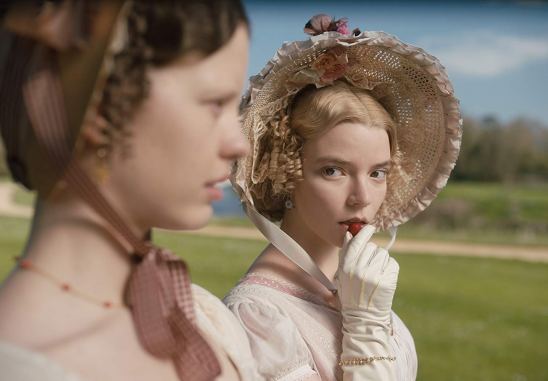 6/10 Luxurious period comedy Emma is absolutely raucous at points, but as it wears on, it just doesn’t spend enough time being funny.

Hartfield, England, early 1800s- Emma Woodhouse (Anya Taylor-Joy), handsome, clever and rich, has lived nearly 21 years in the world with very little to distress or vex her. After two people she introduced get married, Woodhouse decides that she is a matchmaker, much to the chagrin of longtime companion George Knightley (Johnny Flynn). Woodhouse takes on Harriet Smith (Mia Goth), a new friend of uncertain breeding, as her plaything, attempting to set her up with various local gentlemen to generally chaotic results.

Emma is a “comedy of manners,” satirizing the pomp and frivolous details of upper-class society. All the laughs are in who sits down when, who looks where and who can talk the furthest around a given point. The manners themselves may be antiquated, but the basic element of cringe humor is timeless. In its best scenes, the characters are so wound up, their bodies under such scrutiny, that every movement is a punchline to one extent or another.

Emma is funnier the more attention a viewer pays, but you do have to pay attention. There’s little slapstick and no scatological or sex jokes here – it’s all about the subtleties of human interaction, and to appreciate it, viewers are going to have to come in ready to pay active attention to it and put the same kind of weight on a false breath or a misplaced glance that the characters do.

I really worry about Emma’s ability to connect with audiences. The funniest moments are brief, sudden cutaways to Mr. Woodhouse (Bill Nighy), Emma Woodhouse’s father with an acute sense for indoor drafts, in utter distress. Bartholomew and Charles (Angus Imrie and Edward Davis), Mr. Woodhouse’s servants, confusedly carry his screens around the estate to keep him warm, efforts that I find absurdly hilarious, but no one else in the theater seems to be laughing. 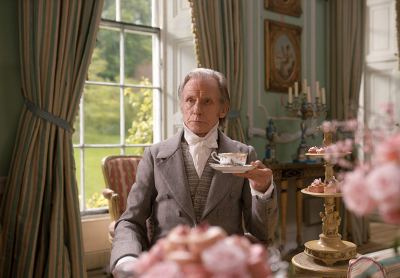 There’s a strong Downton Abbey vibe to the lighting, production design and music. That may be coincidental – there’s about a 100 year gap between Emma and that show, but the upper-class English countryside probably didn’t change too much in that time.

Even for viewers who are game to its sense of humor, Emma just doesn’t have enough comedy to support itself. This movie is about social awkwardness in the 1800s, but that element is only present in every other scene or so, even in its densest stretches. As the film wears on and the questions of who will marry whom get more serious, the joke droughts get longer and longer, and the whole thing starts to feel more like a forgettable drama than a sharp comedy.

There’s a macrocosm of Emma’s overall problem in a scene a little more than halfway through, in which Frank Churchill (Callum Turner) runs through the gates of Knightley’s estate with a distraught Smith in his arms. Churchill swings Smith wildly, nearly knocking her into Woodhouse and Knightley, and while Churchill continues to flail her around, awkward cuts and camera angles mean she never threatens to connect with the bystanders again. The joke is set up and ripe to continue, but it sort of just stops.

The spottiness of the film’s comedic tension could have been mitigated in a couple of different ways, and those should be considered separate shortcomings. There’s not enough energy in the edit. There’s no way to know for sure, but there must have been a way to increase the Emma’s joke density, both by using funnier takes and shortening the scenes that lack that awkwardness. Blame for a final edit is tough to pin down, but it probably falls in varying degrees to credited editor Nick Emerson, novelist and first-time screenwriter Eleanor Catton for not inserting enough humor in the first place and first-time director Autumn de Wilde for not getting enough overtly funny footage.

But blame also falls to Taylor-Joy, who doesn’t seem to be giving her all. She clearly has the prance and the carefree sass this role calls for, but in too many scenes she’s walking without delight and delivering her lines without malice. She kind of gets shown up by Goth, who does a great job of exuding the same absentminded awkwardness into every scene and does a wonderful silly walk every time her character gets excited.

There’s a part of me that’s just not interested in seeing stories about rich people right now unless it’s about them getting guillotined.

The film will probably be more enjoyable on home media with subtitles and the ability to follow the dialogue in exact detail. There’s clearly has at least three or four viewings’ worth of details to parse and appreciate here, but even seeing that, it’s not enjoyable enough to warrant those extra viewings.

Emma would also probably benefit from subsequent viewings because you kind of need to know how the story goes. Starting fairly early, it’s difficult to understand what Woodhouse wants or thinks in a given scene. Knightley seems like his function as a character is as a soundboard for Woodhouse to exposit to, which is a boring way of conveying information when it does work and manages not to work in this case.

There isn’t much reason for Emma to exist. Little Women did a poor job of bringing its 1860s source material into 2020 last December, but that’s a story about professional and social barriers for women that, unfortunately, are mostly still in place today. Emma is a story about matchmaking among landed gentry.

Everything is so sassy for most of the movie that when Woodhouse finally says the wrong thing to the wrong person and genuinely wounds them, the subsequent second-act lowpoint doesn’t just feel boring and overwrought, it feels out-of-nowhere. After an hour and a half barrage of jokes and cattiness for the audience’s amusement, one stray comment that doesn’t seem worse than any other has made all the characters sad and angry, and the sassy jokes have stopped coming. Sassy jokes are what I came for, so that’s a problem for me.

Here we go again with these “heartfelt” comedies that I just don’t have any time for. Emma reminds me a great of Jojo Rabbit, which was also advertised entirely as a comedy and spent about 60% of its runtime on drama. This film’s very nature as a comedy is questionable because the laughs are too scattered and aren’t incorporated well into plot points, but then when we reach dramatic peaks, there’s an eye-rolling dump of bathos to undercut that, too. The goal is to make a movie that’s sour then sweet, but the flavors undermine instead each other of complimenting, and the final product is flavorless.