Posted on January 8, 2020 by reelentropy 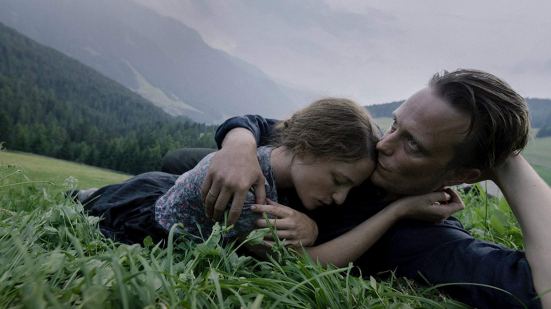 “…For the growing good of the world is partly dependent on unhistoric acts, and that things are not so ill with you and me as they might have been is half owing to the number who lived faithfully a hidden life and rest in unvisited tombs” –George Eliot. Images courtesy Fox Searchlight Pictures.

8/10 For years, writer/director Terrence Malick has defined the inaccessible, nose-raising arthouse film, exactly the kind of self-important, self-satirical movie mainstream audiences think of when they think about movies they don’t want to watch. A Hidden Life does nothing to change that, but it’s a wonderful application of his process.

St. Radegund, Nazi Austria- Austrian peasant Franz Jägerstätter (August Diehl) tends the farm he’s lived on all his life. After the Anschluß, he is conscripted into the Wehrmacht, but cannot serve because he refuses to swear personal loyalty to Adolf Hitler. As a farmer, he is exempted from service for a period of years, but is eventually called into active duty. In 1943, he was convicted by military tribunal and executed for sedition against a country and an army that he did not willingly join. He was declared a martyr and beatified by the Catholic Church in 2007.

A Hidden Life is shot and edited like a standard Malick film, but is pretty much forced into a traditional narrative structure by setting it within Jägerstätter’s life story. Over the years – and particularly over the ‘10s when he suddenly spat out six films, more than half of his career’s production – Malick has carved a distinct place for himself in the arthouse lexicon with his unique and regrettably repetitive filmmaking style. Where most films are shot based relatively tightly on their initial scripts, heading into production with a solid idea of what they need to get and wasting as few resources as possible, Malick brings his actors together and basically shoots thousands of hours of them walking around, the idea being they’ll cobble together a narrative later over a grueling editing process. The final products are ephemeral, vaguely plotted things that always seem distinctly autobiographical and are cut with many of the same themes about God and nature overwhelming the works of man. The lack of organization heading into production has become notorious – several actors have complained of being cut entirely out of his films after expecting to be major parts of them.

A Hidden Life, by its very nature, corrals that production process into something that makes much more traditional sense. There’s a linear timeline – the movie opens with a title card that specifies 1939 and keeps us in the loop on what year it is. Malick has said that a script actually existed this time, but we can assume from the two-year post-production process that it was still made in his sprawling, “find the space in shooting and find the scene in editing” style, but the real-life story of Jägerstätter functions as a sinkhole that sucks the footage into a recognizable narrative. 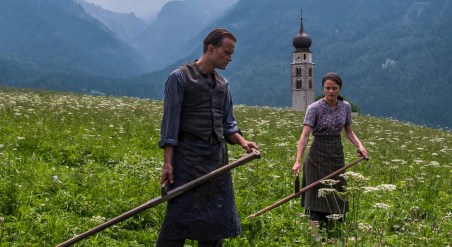 For the improvised spaces of Terrence Malick, A Hidden Life called for painstaking recreation of medieval farming techniques, costumes and equipment en masse — several scenes in St. Radegund feature most of the village participating in the harvest together. It wouldn’t surprise me to learn the cast produced its own harvest over the course of production.

There may have been a script, but words don’t matter at all in this movie. Jägerstätter barely speaks, and there are no subtitles for the German. This movie is mostly a purely photographic exercise, and that’s just fine. The organized narrative makes it easier to enjoy in that sense, and the shooting itself seems more organized than normal.

A Hidden Life was shot in and around South Tyrol, an autonomous province in Northern Italy deep in the Alps, surrounded on all sides by mountains – the real St. Radegund isn’t exactly flat, but is far north of the range. This massive valley is shot in extreme wide angles – 16mm was the “long” lens on this project – with the camera low to the ground, almost ankle-height in some cases and rarely rising above the hips. Characters, who are mostly looking over- and off-camera, seem to tower over the audience, but with the mountains, inscrutable and unmoving, looming, judging them from the background. As the weather changes in Austria, we see the actual weather change in the mountains, sort of like a narrative version of those climate change documentaries. Every space of the movie looks so wide and deep, you can almost hear the massive echo that would result if you shouted into the frame.

When the Nazis show up with their bright red armbands, I finally notice how green everything is. It makes the soldiers seem just as intrusive and out-of-context as they are. Green is a wonderful color to base this movie around, because it can be extremely light or extremely dark and remain vivid, meaning you can have a high-contrast film that is still essentially monochromatic. It’s complimented by lovely browns as well, which also run a full gamut between light and dark. Setting this up as the primary color contrast casts the land itself as in opposition to Nazi rule. The whole package wonderfully captures the strange paranoia of living in such idyllic beauty as the world burns.

A huge chunk words that are spoken are addressed to God directly. Characters so rarely say God and so often refer to it in the second person that it could be difficult to pick up on the fact that you’re hearing prayers for some, but religion is the primary focus and narrative motivation in A Hidden Life. The movie makes a pivotal plot point – really, its principle conflict – out of the Catholic church caving to the Nazis to save their own, which both legitimizes exactly how much pressure Jägerstätter is standing up to but also undermines the church. 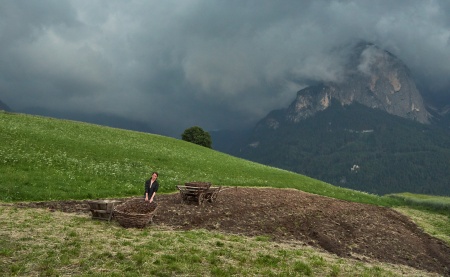 The love of their farm is palpable just from scenes of them tending it, to the point that when Franziska Jägerstätter (Valerie Pachner) starts ripping out grass in frustration, it’s an act of extreme violence. At the end of the film, her oath is to the land. She lived there until she died in 2013 at age 100.

I have to wonder at the implicit cowardice here, beatifying Jägerstätter for standing up to the Nazis after bowing to them itself, and Jägerstätter spends most of the film wondering at it as well. He knows he must defy the Nazis, but defying the church, which tells him to do what they ask, is a radical and shameful act for a deeply religious man, forced for the first time to choose between religious doctrine and religious organization. The contradiction fits right in with the larger theme of the malleability of human institutions set against the inscrutability of God and the land itself.

At 174 minutes, A Hidden Life does get tiring before the end. It’s just a little too much. It lingers longer than it needs to in the spots that it does, though I’m never bored of it, and generally seems more interested in being important than being good. This is a good movie and a wonderful application of Malick’s general technique and the sort of atmospheric techniques of the climate change movies that it evokes, but it’s not something I would see again, and I hope it doesn’t get Oscar attention.

This entry was posted in Entropy and tagged #terrence malick, A Hidden Life, August Diehl, The Tree of Life. Bookmark the permalink.