‘Jojo Rabbit’ is good for the first half hour, then gets sad 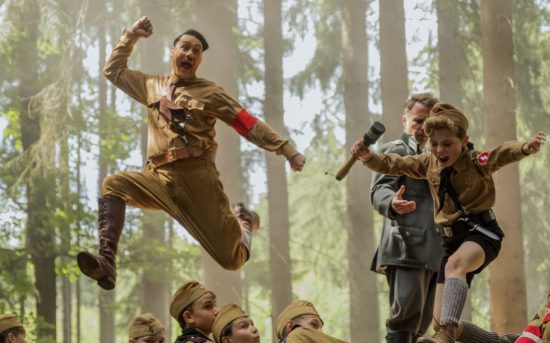 There’s a running gag where characters will express their enthusiasm for Nazism by forming a swastika with their bodies, like Taika Waititi’s imaginary Hitler does here. Image courtesy Fox Searchlight Pictures.

4/10 At its outset, Jojo Rabbit is everything it’s promised to be, sort of like the most twisted Wes Anderson movie ever made. With cheerful colors, square compositions and sharply angled camera moves, the film opens on a Hitler Youth weekend camp, where young Aryans get to experience some of the things that the mighty Wehrmacht go through every day. The film skewers Nazism and white supremacy in general by making a genuine attempt to package and sell its ugliest and most violent realities as delightful and kid-friendly.

That’s the first half hour or so, and then the laughs kind of stop.

Jojo Rabbit follows Johannes “Jojo” Betzler (Roman Griffin Davis). Already an enthusiastic Nazi at age 10, Betzler is hobbled by an incident with a grenade at the camp. Homebound, he discovers his mother, Rosie (Scarlett Johansson) has been housing a Jewish refugee, Elsa Korr (Thomasin McKenzie), whom Betzler is too frightened of to report. Unable to do much else, Betzler deals with the daily grind of keeping morale up in his rural German town as the Soviet and American armies close in with the help of his imaginary friend, Adolf Hitler (Taika Waititi, who also writes, directs and produces).

Jojo Rabbit starts as a wonderful satire of Nazi authoritarianism, but soon, it transitions into scenes about how this was genuinely an unpleasant time in the German countryside, and kind of turns into a bummer. Movies like this that are sold as “heartfelt comedies” have been skewing that ratio in recent years, and Jojo could be more accurately describe as “standard coming-of-age story with some frontloaded comedic elements.”

What becomes noticeable is how boring Betzler is by himself. He’s the straightman to imaginary Hitler, his extremely playful mother and Capt. Kletzendorf (Sam Rockwell), a gay, one-eyed Wehrmacht officer who doesn’t seem to care much about the Reich either way, and he doesn’t hold the screen without a funnyman to play against. This is a problem because the film focuses more as it goes along on his relationship with Korr and how Jews aren’t that bad, and Korr is silly enough, but you can’t really make too much fun in a very literal Anne Frank situation. Also, Betzler develops a crush on her because he’s about to hit puberty and she’s, you know, there, which feels pretty gross when combined with/set against all the Nazi stuff.

It takes away from the satire because the elements aren’t incorporated well – not incorporated at all, actually. Rare is the scene in Jojo Rabbit where Betzler has more than one castmate, meaning that when Korr is on the screen, more rewarding characters aren’t. Even Hitler, who was certainly available for more scenes given that he’s played by the director and was certainly around in the narrative given that he’s the main character’s imaginary friend, is weirdly absent for long stretches.

I don’t really need more heartfelt messaging about Nazis being bad anyway. There certainly is a very vocal handful of Americans who could use a refresher on that, but the type of people who actually fall into Nazism are attracted to the power of it much more than the ideology, and mocking portrayals like what Jojo Rabbit starts out as being are much more effective in tearing that down. This all goes back to The Great Dictator, when Charlie Chaplin himself took on Hitler in a role that Waititi is emulating here, but has remained consistent throughout post-war media-

So not only would Jojo Rabbit benefit as a comedy from a stiff infusion of imaginary Adolf Hitler – and as a product, given that the film was sold largely on the strength of Waititi’s clowning – but it would be more effective as a piece of anti-Nazi media as well.

For those of you still in the mood for a serious, brooding piece about how Nazis were actually bad, look forward to Terrance Malick’s A Hidden Life, an Oscar contender out of Cannes that will start rolling out across the U.S. Dec. 13.