Man, I don’t fucking know anymore. What do people want from movies these days?

We’re obviously living in the Golden Age of Television, and there’s a lot of uncertainty right now over the future of movies as a storytelling medium and what role theaters will serve.

The dominant visual entertainment format comes to us directly now, and the elephantine multiplexes that were built to serve a diverse movie market are beginning to struggle to find material worth screening. Studios are hesitant to risk theatrical releases. Meanwhile, Netflix and its competitors are constantly sucking up new content – it doesn’t need to be good, it just needs to add to the library. They don’t need to sell you a movie ticket, they just need to sell you a click.

Many of the same personnel who make movies are putting their efforts toward  productions earmarked for streaming, or purchased by a streaming service and denied theatrical release to one extent or another. Many of the most interesting filmmakers are  signing onto these projects, valuing the freedom they provide. This has been an increasing trend more-or-less started by David Fincher producing House of Cards for Netflix.

I’m spending at least $30 a week at the Cinemark trying to document American culture through entertainment media, but the biggest entertainment event in years was the finale of Game of Thrones, a show I’ve not seen a single episode of. I’ve got a backlog of six or so reviews here, but the only thing I’m really interested in is Nicolas Winding Refn’s Amazon project, Too Old to Die Young. 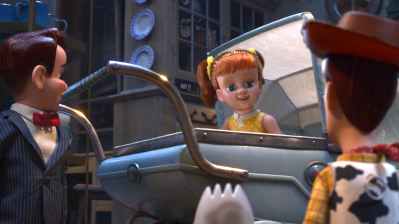 This movie about being too old to continue is set primarily in an antique shop, it’s great.

In the midst of all this change, it looks like what people are most interested in, or at least what people are most willing to go to the theater for, is brand consistency, and that’s what Disney does. They don’t make good movies, but they make movies that are reliably on-brand, that people know what they can expect from.

That brings us to Toy Story 4, which is a movie Pixar did not want to make. The studio has always been averse to sequels – recent history, which was driven by the Disney purchase in 2005, aside – but Toy Story 3 was explicitly meant to be the end. But demand eventually necessitates a product, and so Toy Story 4 was greenlit in 2014, and, predictably, went on to one of the biggest openings of 2019 with a $120.9 million opening last weekend.

Given that no one even wanted to make it, Toy Story 4 is remarkably good.

Two years after being donated to Bonnie, Woody (Tom Hanks) spends most of his time gathering dust in her closet, with her preferring to pin his sheriff’s star to Jessie’s (Joan Cusack) vest. Woody’s dedication is unwavering, and he puts himself at risk time and time again to ensure Bonnie’s happiness, eventually assisting in the creation of Forky (Tim Hale), a crafted toy who immediately becomes Bonnie’s new favorite. Forky knows he was meant to be thrown in the trash, and Woody must fight constantly to keep him from diving in.

The situation becomes extreme when, on vacation, Forky throws himself out of the family’s RV, and Woody throws himself out right after to drag him back. The pair become trapped in an antique shop with Forky held hostage by Gabby Gabby (Christina Hendricks), an old defective doll who’s after Woody’s voicebox. Woody must rescue Forky with a band of stray toys lead by a familiar face – Bo Peep (Annie Potts).

Toy Story is a franchise irrevocably stuck in the past, and Toy Story 4 is a portrait of characters who are all stuck in their own pasts. Woody knows nothing but bringing happiness to children, and his actions are driven by a devotion he developed for Andy. Gabby Gabby’s only desire is to be as she was advertised in the 1950s. Duke Caboom (Keanu Reeves) is defined by the failure of disappointing his child years earlier, which lead to his abandonment, and even Bo Peep is conflicted over lingering feelings toward her Molly.

Every character’s arc is ultimately toward overcoming their old habits and ways of thinking. Even Woody, who is set up as and sees himself as a flat-arc protagonist who changes others around him without changing himself, is forced to confront and overcome the fact that his self-image is no longer accurate.

I didn’t cry — I don’t really cry at movies, not at the usual moments anyway, but Toy Story 4 didn’t seem to have any big “cry now” moments. There’s not that kind of over-cinematic cheese here.

The cast sounds noticeably older. Hanks, who gets the lion’s share of the lines among the original characters, sounds fine, but Tim Allen is getting up there. Potts sounds very old. Cusack sounds like she’s about to die.

Don Rickles did die. Rickles, who plays Mr. Potato Head, died in April 2017 before recording any of his lines, and his family asked Pixar to make sure he was still part of the film. The studio went through years’ worth of recordings to find voice records that would work.

I guess that’s the magic of Toy Story. A quarter century later, the movie that refused to become a franchise is still such a cultural touchstone that, even when the story has become explicitly about its own obsolescence, people still love it all the same.